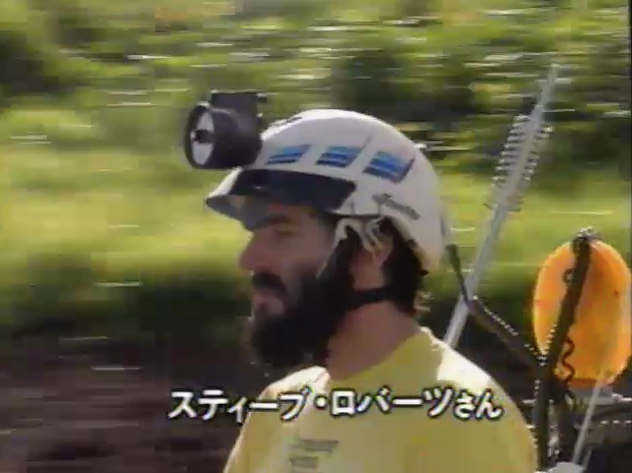 This segment was part of a larger show that focused on emerging network communications, during a time when there was just beginning to be a transition between isolated online services and the then-embryonic Internet. I had recently completed the second phase of the bicycle adventure… 6,000 miles with Maggie (shown in the video), along with a speaking tour around the US in a converted school bus. At the time of this production, we were sharing a house in Palo Alto while beginning the BEHEMOTH project in a cramped lab.

When I digitized this old VHS tape (in early 2017) there was a monologue of about 3 minutes interspersed between the close-up interview and the long-zoom shot of the bikes. I made an audio clip of this and sent it to my friend Mayu, asking for a rough interpretation. She replied:

It starts out with the speaker laying down the framework of the Christian missions and their objectives in past unification projects, something that “we Asians” know little or nothing about. He expounded on their visions of unification and that of bringing all peoples/earth/humanity together on earth and beyond.

Then fast forward 100 years and there is the possibility of locating or procuring the network or ability to bring all of humanity together regardless of cultural boundaries… to bring together all of the universe via networking.

His vision is to surpass or move beyond the level of gods, religions, purpose… to transcend… and to take it to another level and see how the relationships between different countries can change through this “networking” despite the obvious differences the singularity of humanity presents. Can the future provide a platform where unification or “networking” can result in one cosmos?

That was an interesting audio blog, existential… and made me think.

I’m honored to have my little interview snippet be part of such a larger discussion; usually it’s just an upbeat tale of an inventor/writer on a high-tech bicycle. For Japanese speakers viewing this, the audio of that edited-out segment is below.