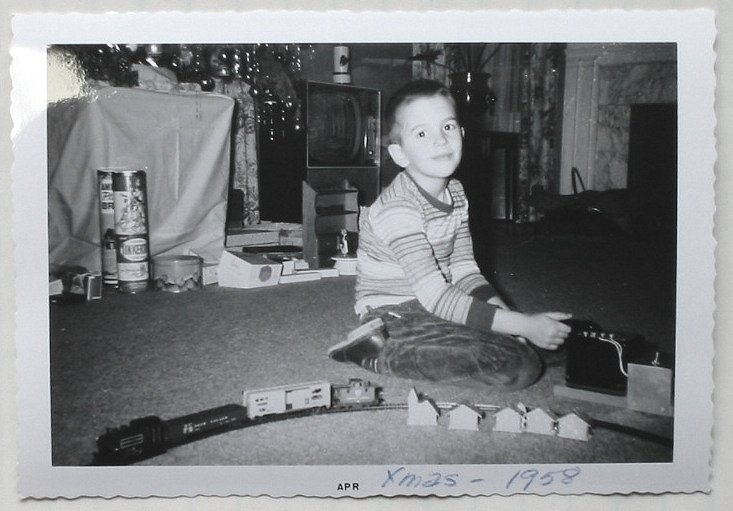 I’ve never been much of a fan of Christmas, except perhaps when I was a kidlet in the nuclear family of mom/dad/me back in Kentucky, long ago and very far away from other relatives. Back then, the tree glittered and new toys appeared, just as they should (nothing has really changed).

Here is a little MP3 of that rotating music box behind my back, under the TV in the 1958 photo above:

Tinkertoys, trains, erector sets, the usual boring clothes and such… I was easy to please back then, and wasn’t particularly aware of the lack of a big family network. I only met distant grandparents once or twice… they all died off before I was a teenager, and the news of their passing was somewhat indistinct and hard for me to visualize. Slowly learning of the family though the artifacts that have landed in my life, I deeply regret this; some of them were amazing people who had a lasting impact on their communities.

Now my parents are gone as well, and but for a recent delightful correspondence with my newly email-savvy 90-ish aunt, I have almost no ties to family history. Perhaps it’s the reminders of mortality that crop up now and then (or maybe just the Seasonal Affective Disorder that’s endemic in the Northwest), but this has recently started bothering me. It is weirdly disturbing being “the end of the line,” though it does make letting go of things via eBay much easier. It’s actually a relief when something leaves… one less thing to clutter the mental database, one less thing to have to deal with someday. Or bequest.

The timeline of life is one of cusps and subjective distortion. I played with this graphically the other day, using an online morphing tool to blend two images of my face… one a few weeks ago aboard Nomadness, the other in 1971 when I was in the Air Force (itself a surreal notion):

The image is weirdly oldyoung, which is exactly how I feel at the moment — tinkering with blinky gizmology for a Grand Boat Trek whilst muttering over the compounding manifestations of incipient oldfartdom. Memory of the space between those two images… my entire adult life… is anything but linear, and the morph is a good metaphor for the crazy tangle of overlaid passions and realities that have carried me somewhat randomly to this point.

There are linear clues, I suppose, but really, much of what makes up a life is the perception of phases delineated by epochs of love, place, travel, and work. And the relationship between those things and the calendar is rarely a 1:1 correspondence.

In my admittedly strange case, I look back at four years in a suburban house in Columbus (1979 to 1983). It seemed interminable at the time; I was a homeowner — a family man and employee for a while, then freelance writing full-time. Three books fell out of that era, including a Prentice-Hall textbook; so did a few dozen magazine articles and even a year of consulting writing for a corporate client in the industrial-control game. And yet, I remember it as a brief blip in my life, a strange interlude between a somewhat languid proto-geek youth and the quirky “career” of technomadics that followed.

In other words, while it was happening it seemed to drag, but in retrospect it appears fleeting.

The next four years encompassed something entirely different: 16,000 of the 17,000 miles I pedaled around the US on my computerized recumbent bicycle… the Winnebiko and Winnebiko II versions (complete with their construction, and a book about the adventure). This is kind of insane, when I think about it… those four years flew by in the youthful exuberance of romantic adventure, responsibility the furthest thing from my mind. But in retrospect, they appear huge, a disproportionately large percentage of my life.

The difference here lies in the anchor points. If I look at my lifeline as a long winding highway, Columbus was the 4-year space between two intersections; the technomadic adventure, though also 4 years, involved thousands of them. Trying to sense them as an 8-year continuous thread actually makes me chortle, so absurd it seems.

And it got crazier from there, by far… but you get the idea. The secret of life extension is the richness of change, yet if you have only change, you miss the sweet continuity of family. And that is something I regret.

Snowbound in the Lab

This maudlin poignancy probably has something to do with having been snowed in for a week, and with today’s difficult experience of helping Sky through the last day of Lily, her much-loved 15-year-old Corgi. Please read her beautiful tribute to the little friend who has been a huge part of her life… that last tearful nod to the vet was the hardest thing Sky has ever done.

And of course we’ve been talking much of life, critters, and change… while the woodstove creaks, the wind howls outside, the lab roof groans under a foot of wet snow, and the boat’s webcam shows a bouncing wintry harbor scene. But we eat and love well, here in our isolated little world, and visitors wander by now and again to brighten the moment. (photo by Sky Myers)

Despite everything, boat progress has been steady. All the waterworks components are in house and about to be mounted on their plywood substrate, the network design is continuing to stabilize, and — perhaps most significantly — I have cleared the clog of dormant clutter that was my electronics lab and set it up to be the “ship simulator” for this project. Packaging and fabrication will happen downstairs in the lab, which is now reasonably habitable thanks to recent insulation and other improvements; microprocessor tinkering and software design will occur upstairs (where it’s warm enough for delicate surface-mount soldering and hours of keytapping).

The building is 10 years old now, originally constructed with the idea of quickly banging out a couple of Microships. I am still trying to figure out what to do with Wordplay… last night, needing a stable low-impedance 12-volt power supply for the lab, I contemplated crawling into the hull to cannibalize the deep-cycle battery and its charger. That’s how it starts, and the realization was not without a few pangs.

The plan with this “simulator” setup is to provide a generous workspace around the console system, which includes the Shacktopus hub along with all the communication and audio gear. The dozen or so Arduino nodes, wirelessly linked by Xbee, will be cobbled together on the bench using Eagle and doubtless a few kluge boards, programmed using the Mac, linked to the hub, then deployed here and there with as many sensors as possible to create a realistic environment. The comm systems will involve coding as well, so I get the feeling I’ll be spending quite a bit of time developing (and writing about) this system.

Of course, what this is really all about, though somewhat hard to imagine at the moment for all the reasons above, is getting back Out There. I’ll close with this photo of us by my dear friend and piano teacher, Bonnie MacPhail:

Posted in Nomadness blog and tagged Camano Island, Family, history
← The Route through the CanalIntertwined Fronts, Stereo, and the Microship →