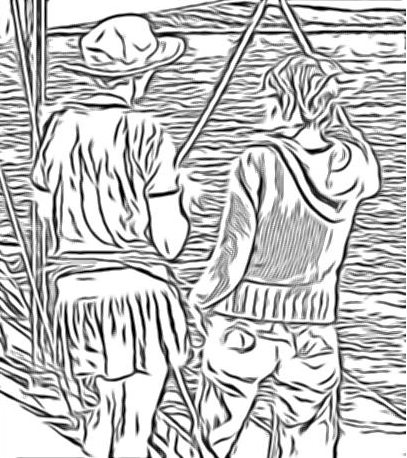 Cold, dark winter days are demotivating and I didn’t get it together to go see how the boat handles a foot of snow loading, but I am happy to report progress on three simultaneous fronts: the ship’s Shacktopus network, the Boat Hacking book, and an online store to conjure a nickel generator from the first two.

I have been writing in the exquisitely agile Scrivener environment that allows me to see the whole book project in parallel, at any level of granularity… yet encourages drilling in at any point to write (with a full-screen mode to hide the cluttered desktop, or a split-screen mode to deal with reference material). What is fun about this is the way the book has become a live development document that drives the ship system design. I theorized that this might work, but during the first few weeks of doing it in Apple’s Pages, I found the process cumbersome, sequential, and very layout-oriented. Scrivener has fixed that, providing a context for big-picture brainstorming with smooth transition into finished text at any point. If you are contemplating a book, you owe it to yourself to check this out; it was written by an author because it was sorely needed, and the price is completely sane ($40). If I didn’t already use a Mac, I’d probably get one just to run this and OmniFocus, which have quickly become indispensable tools around here.

Anyway, the book is now 10,671 words along and taking shape nicely, with all the chapters on virtual index cards pinned to a corkboard. After a few dozen pages of context-setting, there is a chapter called the “Node Catalogue” with one section for every Arduino or other widget hanging off the USB hierarchy. This was intended as a clear way to explain the system to readers, but I have been amazed to discover that it is an even clearer way to explain it to myself. The design has thus been stabilizing dramatically (complete with cruft-reduction and modular task definition, which is the only way to keep it real). I’ve already begun the first simple node (Sewage), as well as the initial process in the hub that scans all nodes to deliver queued messages and build a table of data points. This in turn has subscribers in the form of the Datawake archivist, security/watch software, and web server.

If things continue in this vein, I might actually have a book ready shortly after the system is buttoned up. That would be a first.

While all this has been going on, I have been working on the online store… and have started lining up dealerships, selected the shopping cart software, and planned the overall organization. It should go online in embryonic form sometime in the next couple of months, and I’m looking forward to it; at the age of 21, I cut my business teeth back in Louisville with a mail-order electronic parts business called Cybertronic Systems, and have missed it ever since. The plan, of course, is for this to provide another cash-flow generator to help justify a competent full-time home-base manager.

I haven’t started fabrication of the ship’s nerve center yet, but it is fairly well defined. A corkboard (the real kind this time) is on my lab wall with an actual-size console delineated with yarn and pins. Manila folder cut-outs show all the equipment front panels, and I can move them around with push pins. It’s crude, by CAD standards, but having a full-scale mockup has always been most useful to me at this stage, since I can feel it.

The console is 40″ wide and 15″ tall, and it opens fully for access: the enclosure rolls forward on embedded rubber wheels, the front panel hinges down, and the top panel flops forward onto the same plane. This exposes all the microprocessors, interface hardware, and other goodies, opening it up onto a single 40×45-inch surface that is workbench height at the boat’s original nav station.

As with BEHEMOTH and Microship before, I suspect the biggest single engineering problem will be radi0-frequency interference (RFI)… computers and radios really don’t like each other very much, and this system has dozens of each. This is a very good reason to start bringing subsystems online the moment they are installed, rather than waiting until all the packaging is done to invoke the smoke test and listen to the chorus of birdies from DC to daylight.

It seemed at first a bit of an extravagance, but I bought the only marine stereo I could find that met all the desired specifications… the Fusion MS-IP500.

This thing is amazing. The iPod docks inside a waterproof compartment, with its complete user interface brought out to the front panel and integrated with the stereo’s own controls. It accepts a black-box Sirius satellite tuner, has line level inputs (and outputs for all zones), uses a class-D amplifier that wastes much less power, and even has a CANbus interface for the zone remotes. With my iPod classic tucked inside, this thing has more hard drive space than my laptop (and sounds spectacular)!

Somebody finally got marine stereo right, and I look forward to getting rid of the existing CD widget with gratuitously blinky front panel, non-intuitive interface, and the Radio Shack speaker selector switch box whose guts are dangling into the power distribution bay (which is itself about to get a major makeover with Outback gear next month).

Of course, my choice of the Fusion was no accident, nor was my choosing this moment to fiddle with it. This is the audio amp for all sources on the boat, not just music… and it will mount next to the Edirol M-16DX mixer as well as the sparse-matrix audio crossbar that is a distant relative to the rather grand 32×32 Auxbar we built for the Microship. I still haven’t completely ruled that out, since it works so well, but I need a manual mixer for interactive tasks like podcasting and music, and a few channels of software-controlled configuration management are needed when we’re in minimal-power configuration. So a board of latching relays next to a serious studio mixer is a nice, er, mix.

Speaking of my earlier technomadic contraptions, I have two updates for you.

First, BEHEMOTH is on display in the Computer History Museum as part of their Innovation in the Valley exhibit, and is still entertaining crowds as always. The bike has been enjoying all the attention (even getting loaned to the Williamson Gallery for an exhibit on bicycle art a while back!), but the Microship is still lying at the center of a mountain of lab clutter. Her hull hasn’t felt the lappings of salt water since 2001, and this has been bothering me more and more.

It has been difficult to accept that after a decade of my life devoted to this project (along with all available resources), the planned 14,000-mile Clueless and Lark expedition will probably never happen. I have some rather serious back problems, not to mention other creakiness, and, ironically, an 18-ton steel ship is much more realistic for my future wanderings than an athletic little machine. But with all the focus on Nomadness, I wince every time I step around Wordplay… still poised for adventure in the Microship lab, awaiting her technomadic destiny.

It has thus become evident that she should probably find a new pilot, someone who is mediagenic, geeky, and insanely adventurous. I would expect to spend at least a full-time week or two with the skipper here in my lab, sharing all aspects of the design as well as the infrastructure it represents for an overlay of systems, and I’ll also stay available for brainstorming and consultation as the new project develops. The boat sails like a dream (some heavy-hitter marine architecture consultants were on the design team), and is the resultant of over a dozen man-years of focused engineering work. This is a powerful substrate for a high-profile expedition, and that really needs to happen.

She won’t be cheap compared to other boats of this scale, and she’s certainly not for everyone. But for the right person, she could represent a huge shortcut in time and money compared to the R&D; project that would be required to replicate this range of capabilities: pedal, electric, and sail propulsion; amphibian mode including folding akas and retractable landing gear; 480-watt solar integration; hydraulic controls; and much more.

I can help the new skipper brainstorm the “business model” of a Microship expedition to see if it might benefit from sponsorship, publishing deals, or other spin-offs. Of course, she can just be a high-tech nautical toy for one with deep pockets and a yen for engineering. But personally, I would prefer to see the boat achieve her originally intended purpose of an extended public journey through coastal and inland waterways, and for the right person there is a good probability of corporate and media support (given the continuity of my work over the past 25 years).

I am not mentioning any price tag because it depends on how much is included and the extent my own ongoing involvement, and there are some alternatives to outright purchase that involve more of a shared project. (If you’re just looking for a low-cost one-person trimaran, this isn’t it… you might want to consider the Hobie Adventure Island or the WindRider, both of which are excellent.)

I knew this winter was going to be hard; sometimes working on the boat from a distance is maddeningly abstract. The waterworks panel is still on the bench, awaiting one more trip to the ship to return with real numbers, and little scraps of paper remind me of stuff to take or pick up. The new electronics lab will be a great “ship simulator,” but in a way it adds yet another level of indirection: mechanical assembly down in the shop, electronics and software design upstairs, the boat impossibly far away.

Was this really just a few months ago?

I’m ready to get back on the water.