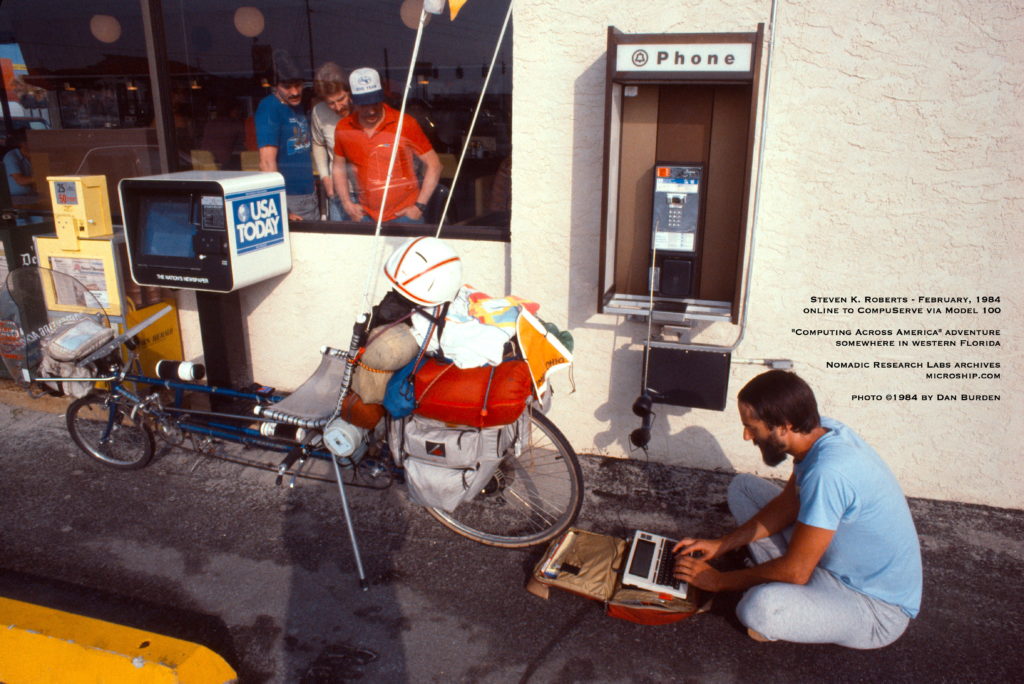 Written from the perspective of my first year on the road, this article in the annual Writer’s Yearbook (from Writer’s Digest) captures some of the excitement about new tools that we now take for granted. Not long before, I had been submitting manuscripts in the form of double-spaced sheaves of paper with 8×10 photos and a self-addressed stamped envelope. The writing world was changing.

There has always been a sense of freedom inherent in the writing life. Freelancing gives you license to be a generalist, you can deduct all sorts of interesting things on your Schedule C, and—despite that pervasive New York mystique—it really doesn’t matter where you live.

Unfortunately, things don’t always work out that way. I wrote full-time for four years in Columbus, Ohio—and between mortgage payments and the general inertia of daily existence, I was chained as securely to my desk as any 9-to-5 corporate drone. Travel? Right. Maybe when I’m 65.

But all that has changed.

I now live on a solar-power-equipped recumbent bicycle, and am writing this piece beside a Santa Fe swimming pool with a portable computer pattering away on the lounge chair before me. Since September of 1983, I have been, in the traditional view, homeless: I am plying my trade from the back roads and beaches of America. With more than 4,400 miles of an estimated 18,000 having passed under my wheels so far, I can report with considerable satisfaction that the nomadic writing life is viable.

However, freelancing involves much more than just putting words on paper. What about extensive business correspondence, filing, research, portfolio maintenance, telephone work, invoicing, and tape transcription—not to mention all the additional problems associated with large book projects? How can I manage this from a bicycle without dragging a trailer-borne office, replete with secretary, along with me?

The key lies in a computer technology that is finally delivering some of those long-promised liberating effects that we’ve been reading about for years. I write where—and when—I like, with no appreciable delays in communication with publishers.

Articles and book chapters begin their lives in a Hewlett-Packard 110 Portable computer, which can be powered from house current, its own batteries, or my bike’s 12-volt solar-energy system. From the next available telephone, the text is then transmitted into a file-storage area on the CompuServe network, where it rests until my assistant signs on to download it into yet another computer in Columbus. At this point, it is edited and printed conventionally, then sent to the publisher (although we often communicate electronically at this stage as well). Mail, money and other matters are handled through the Ohio office.

Since the only constraint placed on my movement is an occasional visit to a telephone, I can wander at will. This has had a profoundly liberating effect. Living on a high-tech bicycle yields endless story material, and the journey has become self-sustaining— in sharp contrast to the kind of travel that depends on a dwindling savings account. Tales that have emerged from the journey include an encounter with prison inmates in the Maryland woods; a sailing trip from Key West to Clearwater, Florida; an evening with the National Weather Service in Slidell, Louisiana; a waterbug-hunting trip in Pecos, New Mexico; and “people stories” of all descriptions.

Life has become high adventure, with daily cultural readjustments the norm. I have also moved into a rather interesting role: agent of future shock. One Midwest farmer, observing me typing cross-legged on the pavement beneath his town’s only pay phone, peered at the bike, spat tobacco juice, and asked in all seriousness if I was with NASA.

One of the most encouraging lessons of my “Computing Across America” venture is that the writing life can in fact be as unfettered as it sounds. Early word processors may have provided us with powerful text-manipulating tools, but they were even bulkier than the old-fashioned typewriters they replaced. The new breed of portables, aided by the robust communications, research, and file-storage resources available through information networks, can dramatically change the way writers do business.

Steven K. Roberts is a freelance writer based in Columbus, Ohio. But you’ll never find him at home. He pedals his best writing—like Computing Across America —out on the road.