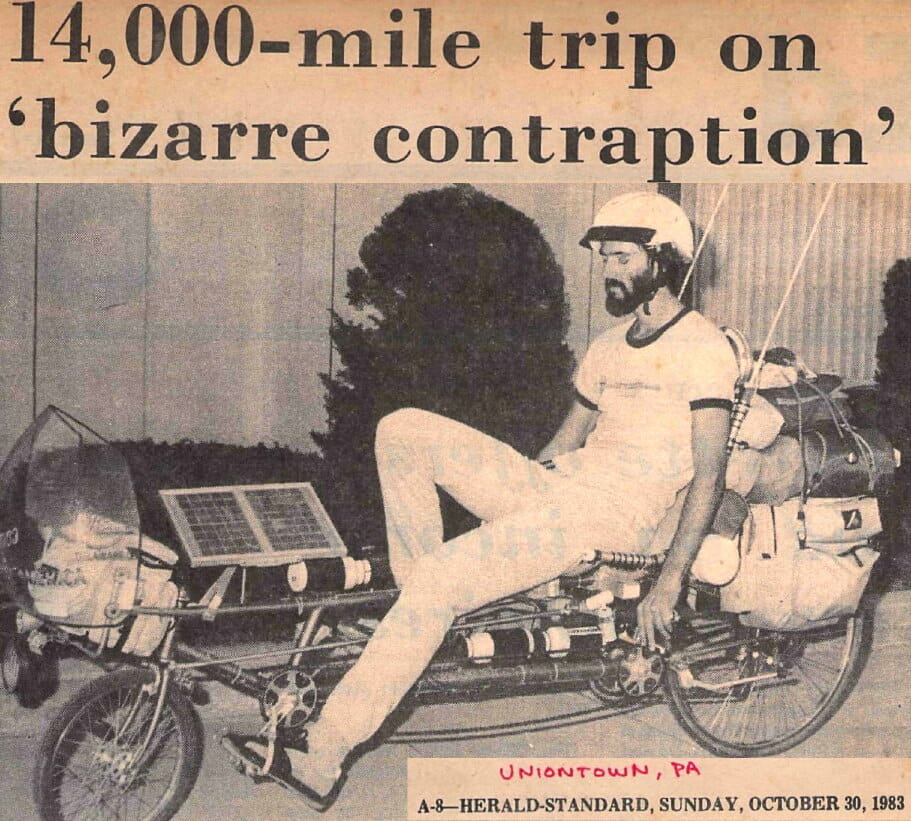 This was the first article written after my departure from Ohio in 1983 (not counting the shakedown cruise), and it brings back fond memories… they caught up with me at the mall in Uniontown, Pennsylvania, where the security guard had just ordered me to get my bike outside. A diminutive, feisty old woman hissed at him: “First Nastassja Kinski’s dog, now this?” (Apparently, they had kicked her out as well.) One thing led to another, and I ended up visiting the fascinating Pressley Ridge Wilderness School… and it’s a chapter in my book.

“I called myself a free-lance writer.” he said. “But there I was, as stuck as any employee, chained to a desk with a house and real estate and responsibility. It wasn’t right, somehow.”

Roberts is still a free-lance writer. But he has left behind his house in Columbus, Ohio, along with its responsibilities. And the only chain that binds is the one that reels in the miles on his bicycle — his companion in a 14,000 mile one-year loop around the United States.

Roberts paused in Uniontown this weekend to finish an article for Online Today, a high-tech magazine, and to talk about his cross-country trek.

“I always wanted to do something like this.” he said, “and I always knew I would do it. I just waited until the technology got to the point where I could.”

Technology figures heavily into the bike’s design. Roberts calls it a “bizarre contraption” — it is roughly eight feet long, with a 16-inch tire on the front and a standard 27-inch tire on the rear. The seat tips back so that the bike looks “like a lawn chair on wheels.” The handlebars fit under the seat.

Solar panels perched on the front charge the four-amp-hour battery that powers the lights, the CB radio and the security system, which uses a beeper to page Roberts if he leaves the bike unattended.

Roberts — who once owned a computer company and wrote three books about computer design — drew up the plans; Franklin Frames, a company in Columbus, built the bike. He started traveling about a month ago and has already racked up about 900 miles. On a good day in flat country he might ride 50 or 60 miles. He has totaled as much as 80 miles.

Roberts rides during the day, although he sometimes travels at night, turning on the lights that make the bike “look like a carnival.” He rides in rain and cold with the help of gloves and a Gore-Tex rain suit that sheds water without trapping perspiration. He watches the traffic behind him from a rear-view mirror attached to his helmet. And people, he said, observe him with some curiosity.

“I notice when I ride along and wave at people, they just stare at me like they can’t believe it,” Roberts said. “The bike does have a very disarming quality to them, though. To them, I’m sort of a harmless eccentric.”

The publishers he writes for take  him more seriously — seriously enough to almost guarantee him work for the duration of his trip. He carries a small word processor with him and writes when he breaks for the day. He has the October cover story in Online Today magazine, and also expects advances for two books he plans to write. “I’m working all the way,” he said.

He is also working his experiences into travelogue form, filing them into a computer network that enables people across the country to read about the trip. “It’s getting a kind of  following,” he said. “I’m even getting some fan mail through the system.”

The work sets Roberts’ trip apart, makes it more than a random jab at notoriety.

“There has always been this gap set up between work and play,” he said. “I think I’ve bridged that gap.

“Sure, it’s totally insane, but what the hell — it’s supposed to be.”

Roberts will set off today, traveling along Route 40 east, heading toward Washington, D.C. before he swings south and into another loop of his journey. He may take longer than a year to finish the trip if he finds an area he likes.

He has already put his house in Columbus up for sale.