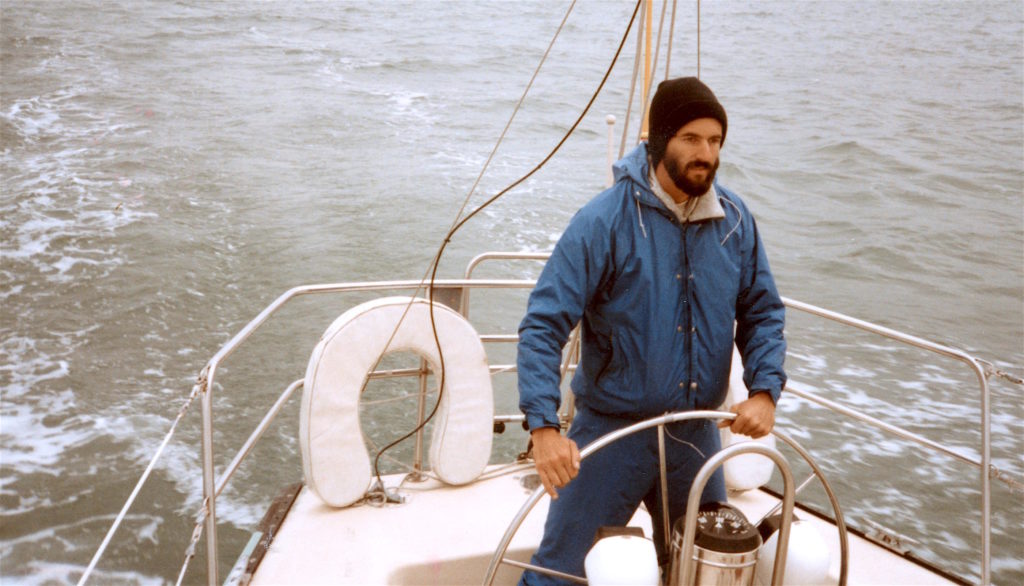 This actually took place in late January, 1984, and the story that became part of my monthly narrative in Online Today (below) ended up getting fleshed out into one of my favorite chapters in Computing Across America… included in the free sample available as a PDF. For the full version, with more detail and photos, please see either of those.

It’s not easy to leave paradise. I managed to put it off for two and a half weeks — long enough that it became something of a standing joke among my Key West friends.

“Found that boat ride yet?” some one would ask with a chuckle.

“Working on it,” I would lazily reply from my blanket on the beach.

The boat ride, you see, was the holdup. That long narrow stretch of U.S. Highway 1 from the mainland to Key West is justifiably infamous in the cycling community, and I was loathe to backtrack on it all the way to Miami.

So I stayed in paradise, living a fantasy, occasionally making halfhearted inquiries about the yachting and fishing traffic. “Any boats head out of here for Naples?” I might ask a random bartender.

“Not that I know of. Checked around the shrimp docks?”

And there the matter would rest for another couple of days. So what was the hurry? It was 85 degrees in mid-January, and the rest of the country was freezing.

But finally, unmistakably, the road started to beckon again. After a while even paradise gets old: I was “conched out,” as they say in the Conch Republic, and ready to move on.

Then, as fate would have it, a yacht race arrived in town from Ft. Lauderdale. A minor bit of deception got me into the Navy base where the roughly $23-million worth of wind-powered hardware was berthing. In less than 15 minutes on the docks, I met Bob Horst. He eyed the “Computing Across America” logo on my fairing and, with a twinkle in his eye, started asking well-informed questions.

He mentioned that he owns not only an Apple Lisa but a J/36 racing yacht known as the Awesome! He offered me a lift to Clearwater, and with his keen sailor’s eye, appraised the bike, speculating about where on the boat it might fit.

“How about here?” I asked, pointing at an open area adjacent to the well-instrumented helm.

He looked at me critically. “Ever sailed before?”

“You don’t want anything in the way back here.” He gestured to the winches. “It can get pretty busy.”

“Howzabout along the rail, up there on the foredeck?”

“Two problems with that. Your bike will get drenched in saltwater, and it will be in the way of the jib. I think the stern’s our only hope.”

I looked, aghast, at the stern. The only way an 8-foot recumbent was going to fit there was on the outside of the rail, lashed precariously to the ladder. My heart sank, and full of misgivings, I finished my beer and pedaled off in search of plastic sheeting, packing tape, and WD-40.

I showed up at the dock the next morning, already imagining the scuba diving operation that would be required to rescue my barnacle- encrusted bike from the Gulf floor. But all fears dissolved: We ended up disassembling the machine and squeezing it down the hatch, through the cabin, and into the forward sail locker.

And so we set sail, motoring out into Key West harbor, avoiding the shoals while hoisting the canvas. The storm jib was raised in anticipation of heavy weather, as I struggled with the simple task of tying up the mainsail at the second reef point. “What kind of knot you want here?” I hollered above the engine.

Buckled into a safety harness, clad in every available layer of cold-weather gear, one foot on the rail, numb hands gripping the wheel, eyes flicking over the instruments, I struggled to hold the course. My fear of the whole mess tipping over gradually subsided. The violent sea began to feel natural, then exhilarating. And the magic began:

The phosphorescent red and green glow of the water breaking over the bow. The lonesome intermittent light of a shrimper, miles off to port. The moon, 3 days past full, now and again obscured by swift clouds. The taste of salt in my beard. The orange glow of the instruments, a half-dozen displays reporting the observations of various computers and sensors. The snapping of the sail, a five-story triangle aglow in the moonlight. A wraithlike bird — or something — zipping overhead so quickly that it was gone before I finished raising my head. My watch ending, and ending, and ending, while I tried to call out above the roar of the elements for my relief.

And then the ludicrous attempt to use the head in the violently pitching bow… and then sleep, curiously easy.

Too soon perhaps, though dearly welcome, came the Clearwater harbor. Past lonesome moaning buoys, we motored into the dark channel at midnight, blasting the air horn long-short to rouse the sleeping bridge keeper. The trip was over, and there was suddenly highway ahead.

In Key West, I had politely declined an offer of a van ride to Ft. Meyers: Traveling the roads in a motorized vehicle would betray the journey. But this, somehow, was not even slightly out of context. It was a fitting conclusion to my stay in paradise.

The universe, by the way, rendered one small contribution to the voyage. As we drew near Clearwater on that flawless second night, someone switched on the radio. Christopher Cross was singing, “…the canvas can do miracles, just you wait and see… Fantasy gets the best of me, when I’m sailing…”