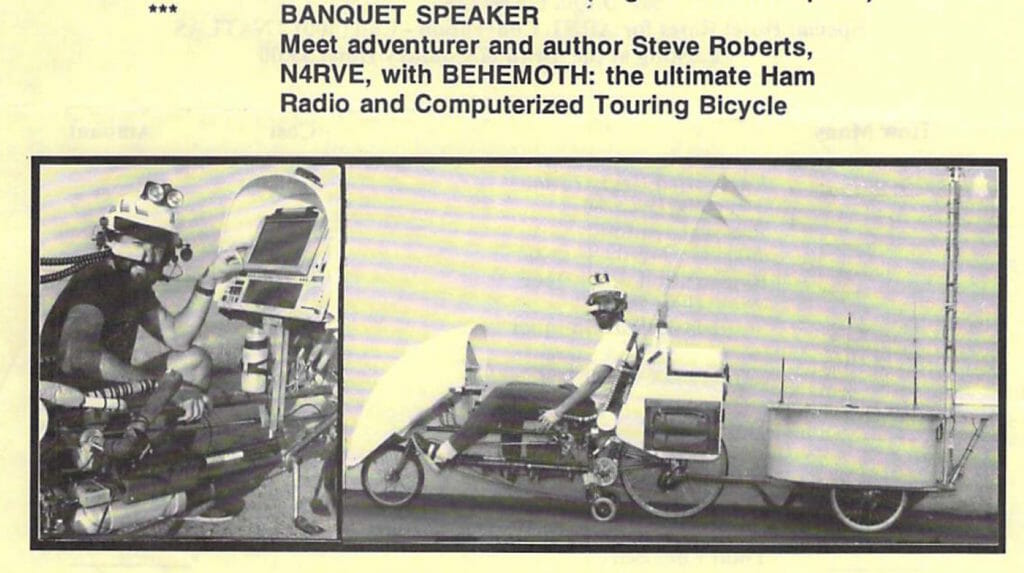 The ultimate road warrior, roving researcher and high-tech bicyclist Steve Roberts, N4RVE, of Nomadic Research Labs will tell us about the recumbent bicycle he built, the Big Electronic Human Energized Machine… Only Too Heavy “BEHEMOTH.” Steve’s solar-powered recumbent bicycle weighs 580lbs and is outfitted with commercial, amateur, cellular, and satellite communication equipment, solar power, on-board computers, speech synthesis and recognition gear, InterNet access, GPS navigation, and icebox/rider cooling system, hydraulic landing gear and a “brain interface unit” helmet and more. The “BEHEMOTH” will be on display in the Mission Foyer during the convention. Steve started out in 1983 building “WINNEBIKO,” and began his trek around the country, peddling and computing. After 10,000 miles, Steve wrote his first book “Computing Across America” and revised the bike into “WINNEBIKO II” which looked like an aircraft cockpit and was featured in 73 Magazine. 6,000 miles later Steve built “BEHEMOTH,” easily the most spectacular electronic vehicle since NASA’s Lunar Lander! Steve, a Ham off and on since he was 13 years old, is the Author of five books and hundreds of articles. He moved to San Diego in 1993 where he is working at UCSD on the new project “MICROSHIP,” the world’s first Computerized Trimaran. He has long been interested in computers and has extensive experience in integrating complex systems with a life of freedom and adventure.