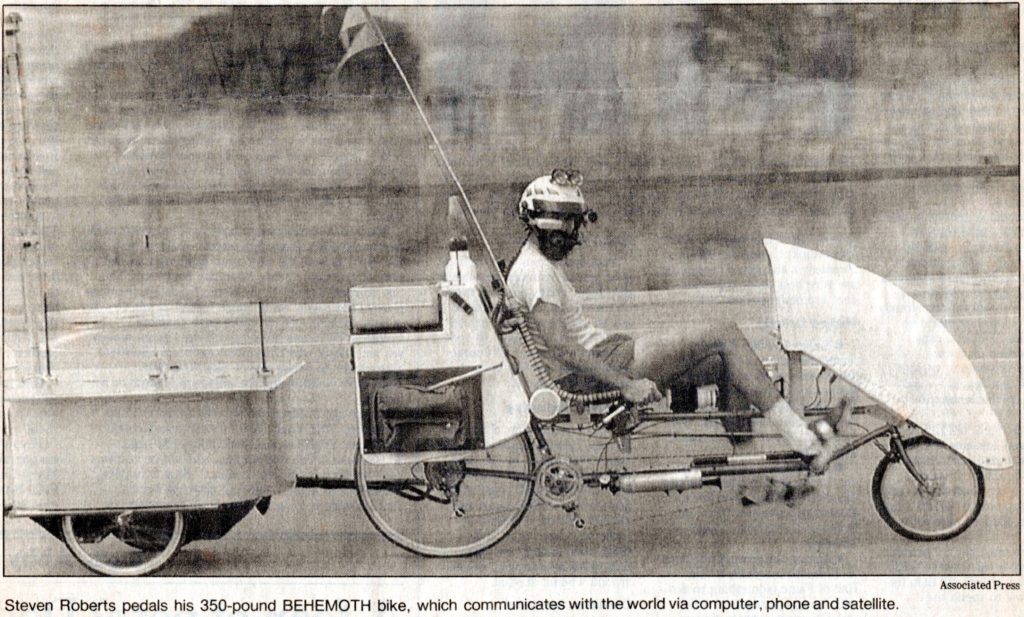 This story was written two years before I landed in San Diego to begin the Microship trimaran project… teaching at UCSD. At this point, I was on the road after 3 years of BEHEMOTH development in Silicon Valley, beginning a speaking tour with a mobile lab and trying to figure out what I was going to do next.

MOUNTAIN VIEW — Steven Roberts lives in ephemeral “Dataspace” when he’s on his bicycle built for too much computing power, at least for most ordinary human beings.

But the high-tech nomad who has pedaled his computer-burdened BEHEMOTH more than 16,000 miles doesn’t claim to be ordinary. He barely admits to being human.

“The bike is becoming a showpiece of future technology with radical human interfaces” — that’s Roberts — “dynamic multiprocessor system architectures, and experimental communications links hinting at what may lie ahead for society at large,” he writes in a report on his “nomadness” and his machine.

“What does this all imply?” he asks.

Or, for those who don’t speak techno-babble, what does it all mean?

Translation: Roberts exercises brain and body on his 350-pound recumbent BEHEMOTH — Big Electronic Human Energized Machine, Only Too Heavy — that communicates with the world via computer, cellular phone and satellite.

Top speed: 100 words per minute on the computer and so fast downhill that Roberts has six separate braking systems to slow the 8-foot-long BEHEMOTH and 4-foot-long trailer loaded with equipment.

Uphill, the 105-speed BEHEMOTH, trailer and RUMP — Rear Unit of Many Purposes — struggles along at just over 1 mph and needs training wheels to stay upright. Roberts’ normal flat land speed is 12 to 14 mph, “depending on my attitude and what I had for breakfast.”

“What keeps me rolling personally is this whole symbiosis idea,” says Roberts, who spent the past two years updating his high-tech machine to prepare for another cross-country journey. “There’s me, the machine, the technology, the computer industry.

“It all comes together.”

So far, about 150 computer companies have embraced Roberts’ rolling vision, donating $1 million in equipment for BEHEMOTH.

But the question remains: How useful is a slow, heavy bike with a computer?

Roberts can write in shorthand while he pedals by pressing combinations of 10 buttons on the grips of his handlebars. A computer translates the shorthand into text on a screen in front of him.

The computer can then contact an advanced satellite navigation system to determine Roberts’ location and speed, and flash on the computer monitor — it’s where the handlebars would be on an ordinary bike — a map showing the road ahead.

The system can also open and send electronic mail, dial telephone numbers — the mike and earphones are in Roberts’ helmet — and dispatch and receive faxes.

Most of this is accomplished with three main computers, including a Macintosh and mixed and matched innards of others, and by using voice commands or an ultrasonic beam built into his biking helmet, which also has a cooling system and audio sound for music.

“Some of this is through my own invention,” Roberts says. “But most of this is the technical wizardry that’s out there.”

Roberts plans in October to return to his Nomadic Research Labs office at Sun Microsystems Inc. in Mountain View. In January he says he’ll leave again for parts unknown — San Diego is on his tentative itinerary — perhaps never to return.

“One of these days I’ll get burned out, but right now I just want to keep pushing the technology,” says Roberts, 38. “If you think too much about where you’re going, you lose respect for where you are.”

Evolution of a mutant

Moving down the highway, Roberts and his BEHEMOTH look like a mutant version of man and machine. “Are you from NASA?” is a common question.

No, he’s originally from Louisville, Ky. But after a stint as an engineer in Columbus, Ohio, he threw off the shackles of suburbia in 1983 and made a list of the passions he would pursue: writing, adventure, computer design, ham radio, bicycling, romance, learning, networking, publishing.

Then he hopped on his first, relatively low-tech recumbent bike dubbed Winnebiko and with a Radio Shack laptop began to seek out Dataspace — “a multilayered place that is every place, yet no place at all.”

Roberts thinks he has found Dataspace with BEHEMOTH, a solar- and human-powered machine that seems to have a limitless computer reach.

The BEHEMOTH’S gee-whiz tricks are too numerous to list, which is why one of its talents is a security system that can issue verbal warnings, call 911, track a thief or zap a crook with a 60,000 volt stun-gun charge.

“Do not touch or you will be vaporized by a laser beam!” the BEHEMOTH is programmed to say before getting tough.

Roberts has worked on his invention in rent-free space at Sun Microsystems. In return, he’s a paid consultant, testing products and suggesting improvements. He’s also an author of numerous articles, the book Computing Across America and a quarterly journal, Nomadness, for desk-bound types who like to follow his adventures.