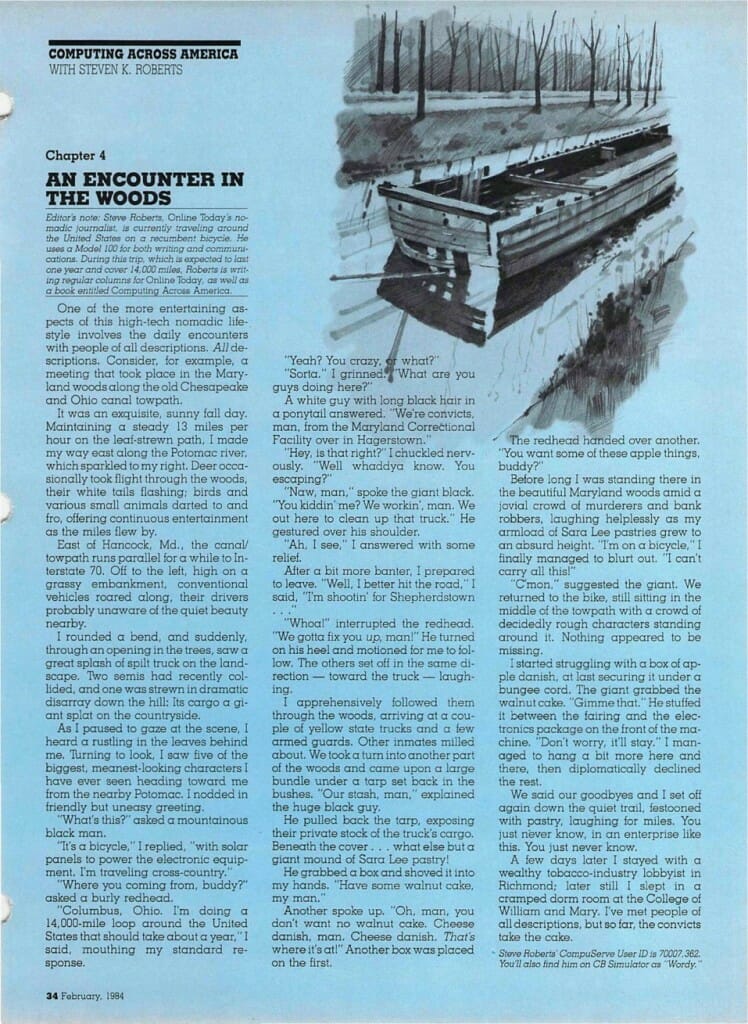 This event on the Chesapeake and Ohio Towpath in Maryland was the first of the truly bizarre encounters of my bicycle adventure… bordering on the terrifying, rife with absurdity, and yielding a crazy tale that entertained audiences for years. It became a full chapter in the Computing Across America book (and is in the PDF free sample file), but this was the first published version… the language has been cleaned WAY up for this family magazine!

One of the more entertaining aspects of this high-tech nomadic lifestyle involves the daily encounters with people of all descriptions. All descriptions. Consider, for example, a meeting that took place in the Maryland woods along the old Chesapeake and Ohio canal towpath.

It was an exquisite, sunny fall day. Maintaining a steady 13 miles per hour on the leaf-strewn path, I made my way east along the Potomac river, which sparkled to my right. Deer occasionally took flight through the woods, their white tails flashing; birds and various small animals darted to and fro, offering continuous entertainment as the miles flew by.

East of Hancock, Md., the canal/towpath runs parallel for a while to Interstate 70. Off to the left, high on a grassy embankment, conventional vehicles roared along, their drivers probably unaware of the quiet beauty nearby.

I rounded a bend, and suddenly, through an opening in the trees, saw a great splash of spilt truck on the landscape. Two semis had recently collided, and one was strewn in dramatic disarray down the hill: its cargo a giant splat on the countryside.

As I paused to gaze at the scene, I heard a rustling in the leaves behind me. Turning to look, I saw five of the biggest, meanest-looking characters I have ever seen heading toward me from the nearby Potomac. I nodded in friendly but uneasy greeting.

“It’s a bicycle,” I replied, “with solar panels to power the electronic equipment. I’m traveling cross-country.”

“Where you coming from, buddy?” asked a burly redhead.

“Columbus, Ohio. I’m doing a 14,000-mile loop around the United States that should take about a year,” I said, mouthing my standard response.

“Sorta.” I grinned “What are you guys doing here?”

A white guy with long black hair in a ponytail answered. “We’re convicts, man, from the Maryland Correctional Facility over in Hagerstown.”

“Hey, is that right?” I chuckled nervously. “Well whaddya know. You escaping?”

“Naw, man,” spoke the giant black guy. “You kiddin’ me? We workin’, man. We out here to clean up that truck.” He gestured over his shoulder.

“Ah, I see,” I answered with some relief.

After a bit more banter, I prepared to leave. “Well, I better hit the road,” I said, “I’m shootin’ for Shepherdstown…”

“Whoa!” interrupted the redhead. “We gotta fix you up, man!” He turned on his heel and motioned for me to follow. The others set off in the same direction — toward the truck — laughing.

I apprehensively followed them through the woods, arriving at a couple of yellow state trucks and a few armed guards. Other inmates milled about. We took a turn into another part of the woods and came upon a large bundle under a tarp set back in the bushes. “Our stash, man,” explained the huge black guy.

He pulled back the tarp, exposing their private stock of the truck’s cargo. Beneath the cover . . . what else but a giant mound of Sara Lee pastry! He grabbed a box and shoved it into my hands. “Have some walnut cake, my man.”

Another spoke up. “Oh, man, you don’t want no walnut cake. Cheese danish, man. Cheese danish. That’s where it’s at!” Another box was placed on the first.

The redhead handed over another. “You want some of these apple things, buddy?”

Before long I was standing there in the beautiful Maryland woods amid a jovial crowd of murderers and bank robbers, laughing helplessly as my armload of Sara Lee pastries grew to an absurd height. “I’m on a bicycle,” I finally managed to blurt out. “I can’t carry all this!”

“C’mon,” suggested the giant. We returned to the bike, still sitting in the middle of the towpath with a crowd of decidedly rough characters standing around it. Nothing appeared to be missing.

I started struggling with a box of apple danish, at last securing it under a bungee cord. The giant grabbed the walnut cake. “Gimme that.” He stuffed it between the fairing and the electronics package on the front of the machine. “Don’t worry, it’ll stay.” I managed to hang a bit more here and there, then diplomatically declined the rest.

A few days later I stayed with a wealthy tobacco-industry lobbyist in Richmond; later still I slept in a cramped dorm room at the College of William and Mary. I’ve met people of all descriptions, but so far, the convicts take the cake.

The Towpath runs 184 miles from Cumberland, Maryland to Georgetown (Washington DC). It is a magical place, and very much the way to pass through the mountains if you are on a bicycle. There is an excellent Yahoo Group where you can find current information.

Back in 1983, someone gave me a Towpath guide (Hahn) that now appears to be out of print, but this one is well-liked (clicking the cover image takes you to the book’s page on Amazon):

By the way, I pitched this tale to the Sara Lee corporation way back when, thinking it would make an awesome commercial.  “Nobody doesn’t like Sara Lee!”  They enjoyed it, but were a little wary of venturing into the politically incorrect zone, I think…