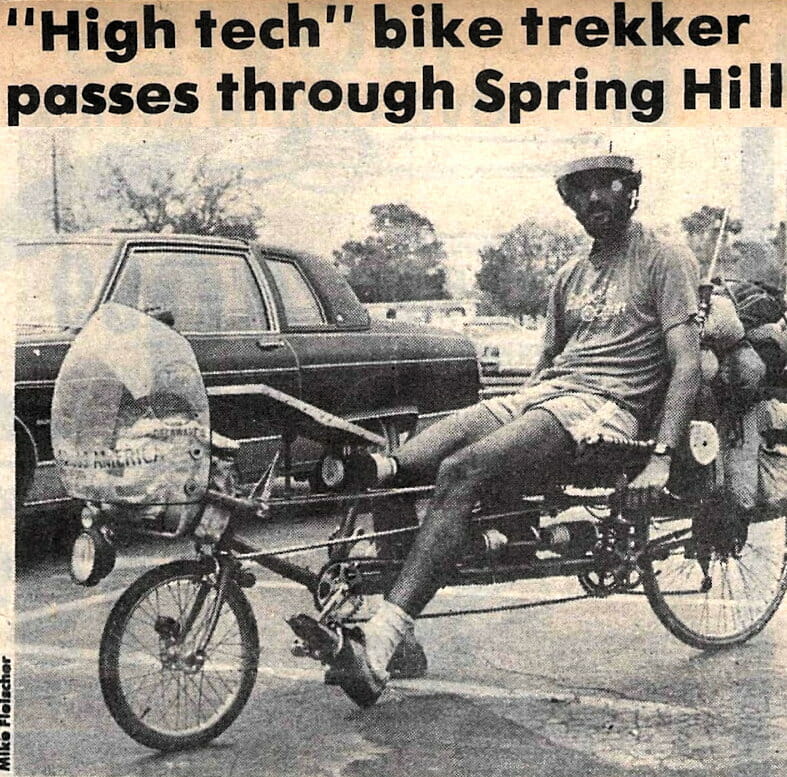 This was a fun encounter – I was pedaling up the dreaded Highway 19 after sailing with the bike from Key West to Clearwater. Suddenly, just south of Weeki Wachee, a fellow standing on the side of the highway began waving his arms and calling, “Stop! Stop! My boy called and said I had to come out and see this modified bike!” One thing led to another, and I ended up staying the night at his house… where the other guest was a Dutch round-the-world cyclist at the other end of the gear-weight spectrum. It made for a good chapter in the book.

Last week, the NEWS chronicled the adventures of Tom Rijven, a young Hollander who has spent the last 2½ years on a cycling odyssey around the world.

No sooner did that story appear then who should come riding up U.S. 19 but Steven K. Roberts, a writer from Columbus, Ohio, who is “Computing Across America” on what he calls a “high tech bicycle odyssey.”

But where Rijven is cycling around the world for his own pleasure, Roberts is doing it to see if he can maintain a writing business – he does books and articles on computers as well as developing computer software – while cycling around the United States.

And where Rijven has boiled his needs down to absolute basics, Roberts’ “Winn-a-bike-o” is a veritable office on two wheels as well as a vehicle and a shelter transport.

“The key to maintaining the writing business on the road,” he says, “has three key components – a portable computer (in this case, a Radio Shack Model 100), the CompuServe Network which enables me to transmit data from any phone anywhere, and an executive assistant (Kacy), who (in computer terms) is my interface with the rest of the world.”

Roberts’ bike is a unique vehicle in and of itself. It is what is called a “recumbent” bicycle, which means that the operator sits far more horizontally than vertically – what Roberts feels is a “more natural position” for power and also what he feels enables him to carry a larger load. His rig, he said, weighs about 135 pounds. Rijven’s weighs only about 45.

“What the recumbent bicycle does is give me the space for a serious human-powered travelling machine,” he said.

And what a machine it is. In addition to its computer, Roberts’ bicycle has solar panels to recharge batteries which run everything from the computer to headlights to a CB radio and a regular AM/FM radio, a cassette tape recorder, and a strobe light for visibility at night. He carries a dome tent, air mattress, sleeping bag, food, a fluorescent light for his tent, maps, books, and cooking equipment, including a stove.

The bike also has two sets of brakes and 18 speeds forward, biased toward the low range.

Now 31, Roberts was born in Erie, Pa. and adopted while a baby by a family in Louisville, Ky.

After graduating from high school, he “had a brief fling with engineering school,” then dropped out to start his own engineering firm. He worked at it for six years, churning out custom industrial control systems utilizing (and often building) hardware, developing software, and learning a lot about microprocessors.

But he left that because “I had ruined a good hobby by turning it into a business.”

By then he was doing technical articles and began thinking seriously about turning that aspect of his business into a profession. In order to ease the transition from engineer to writer, he took a job as a software engineer. “That lasted six months and then I took the plunge,” he said.

Since that time he had done three books and dozens of magazine articles.

About a year ago, he “tired of the three bedroom ranch in suburbia” so he did the next logical thing, he began planning a bicycle odyssey. “I had made sporadic atempts in the past, thinking at one time of a trailer pulled by a 10-speed bike,” he said. “But in developing that concept, I tore a knee ligament.”

Finding a “van too small” but a “bike big enough,” he then decided a motor home was just the ticket. It wasn’t. Selling it, he went to work on this “Winn-a-bike-o” concept, refining it to the point where he was able to leave on his journey last fall.

His first step was to go from Columbus to Key West via Washington. From Key West, where he laid over to write for a while “and to soak up some of Hemingway’s spirit,” he caught a ride on a racing sailboat headed for Clearwater. From there, it was up U.S. 19 to Gainesville where he’ll lay over about a month, refining the mechanical aspects of his bicycle and adding a couple of disc drive units to his computer.

Then it’s off to California, up the West Coast to the Canadian Rockies, down the Continental Divide to Colorado, up to the Great Lakes, over to eastern Canada, south into New England, and then to Europe. How long will it take? “I haven’t any idea or any fixed schedule,” he said.

Steve Roberts is seeing the country on his own terms. And he’s proving in the process that you can run a thriving free-lance writing business and that you can take a lot of the comforts of home with you when you go touring the world on a bicycle.