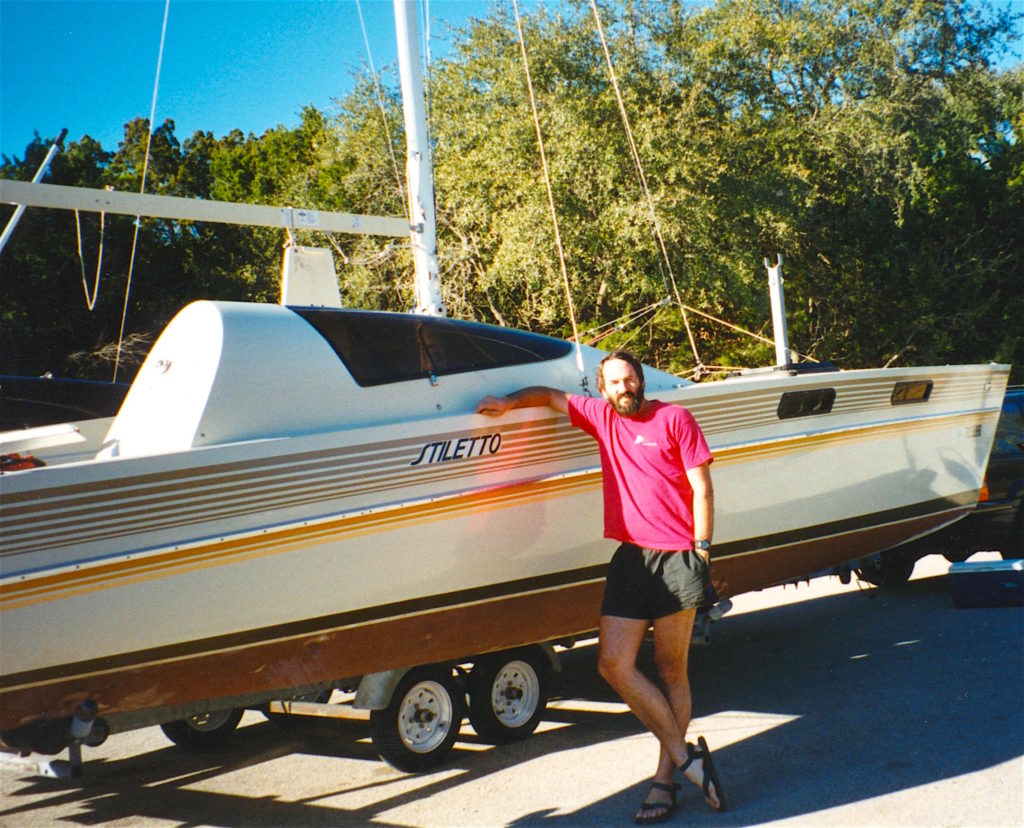 I just spent the weekend making a brief airborne jaunt to San Antonio, Texas to visit Charlie Mayer and go sailing on Canyon Lake aboard his Stiletto 27. This issue of the Microship Status Report is devoted to my first observations about the boat, thoughts on a few bizarre but essential mechanical hacks, and the decision that now confronts us…

We’ll be putting lots of pix on the Web server as soon as we get our scanner and video frame grabber, but let me take a shot at describing this to you. It may be the floating substrate that we slide under all this technology we’re so busy developing.

The Stiletto 27SE I saw in Texas is a 27′ catamaran, 14′ wide when on water, 8′ wide when trailered. It accomplishes this mode change via telescoping aluminum crossbeams held in place by eight robust tapered stainless-steel pins (one of my concerns is wear or corrosion around these after frequent cycling in a salt-water environment, though everyone says it’s a reliable system). The hulls are about 33″ wide over most of their length, and have cockpits with 4-bar retractible smoked plexiglas canopies reminiscent of fighter aircraft. Inside, there are VERY long bunks (13′) forward, room for a control console, and generous space aft for a galley in one hull and a lab/comm area in the other. Each hull has an additional access hatch forward and a pair of rectangular non-opening windows. The mast is about 40′ high, with an inventory of four sails including a reacher/runner whose tack can be swept along a bridle between the bows. Forward of the mast is an 8×8′ tramp; aft is an 8×10′ hard deck fixed to the crossbeams (9.5′ apart). When compressed, this nomex-cored deck nestles atop the hulls.

The boat performs well — zipping along briskly in gentle breezes (I seem to recall hearing 12 knots in a 10 knot wind, but I didn’t take the Traxar GPS on this trip). We only sailed on a lake and it was calm except for one exhilarating hour, so I can’t report on performance in heavy conditions… but it feels good with a safe bit of weather helm and fairly painless sail changes. There’s one reef point in the main, and no roller furling (yet). At anchor, the boat is reported to ride gently with minimal windage, since very little surface is presented to the wind. And since the anchor is deployed from the bridle, the boat can be steered back and forth by adjusting the bridle back and forth (already set up to accommodate the reacher).

In short, this is a fast cat, trailerable, big enough to accommodate our equipment and basic human needs, yet not yacht-scale. Now let’s talk about the major hacks that would be necessary to make it work as the Microship substrate…

There is, by definition, no boat out there that is ready to accept our electronic systems and magically become the Microship. We have too many strange requirements. The following comments are not intended as a complete catalog of mechanical projects, but instead address the major issues that MUST be dealt with if this is to work.

We need some sort of dinghy on the ship, and would like playboats as well for exercise and exploration. An excellent solution is a pair of kayaks (seaworthy, fast, light, and fun), but where to stow them on a sleek 27′ cat? After pondering this problem, I like the idea of fold-out stainless steel davits that hinge at the crossbeams, lay across the hull decks, and curve gracefully to match the decks of a pair of Current Designs rotomolded Solstice kayaks, one on each side (we’re trading the Libras back to the factory for the new singles). The interesting twist here is that the boats would be supported in stiff slings, linked to the mothership via blocks with about 6-part purchase. To deploy a kayak, simply load the hatches as necessary, step into it from the adjacent hull, uncleat the line, lower yourself into the water, and paddle away. To return, glide into the slings, haul up, cleat off, and step out. Since these would be in the way under most docking situations, the davits fold back onto the wingdeck and the kayak(s) stow onboard or under the boat between the hulls (the basement).

This is not at all defined yet, but is a critical and inflexible requirement. Basically, the Microship will only work for open-ended technomadics if there is a way to take it on the road without having to import a tow vehicle and special trailer, and that translates into the need for a built-in trailer (trucks we can rent). Currently, the Stiletto trailer looks like a normal boat trailer with slide-out arms to accommodate the mode change; we’re going to need landing gear that deploy from the crossbeams, swing under the hulls for additional cradling support, and include adequate suspension. There also has to be a structure that serves as a tongue and hitch, but goes away when we’re on water. In addition, the boat has to come out of the water at 14′ beam and then slide into an 8′ road width… Charlie had the elegant idea of simply jacking up one side, slipping a little wheeled carriage under it, doing the compression, then removing the carriage. We discussed the self-trailering issue at length, and it seems possible; I’m hoping a UCSD student engineering team (Ames 156B next quarter) can take this on.

Somewhat related to the foregoing is the mast deployment system. Normally this is part of the trailer — a gin pole is erected and used to winch the mast up and down. Here, we’ll need a pole or triangulated frame that can be folded vertically at the forward crossbeam and guyed, allowing the mast to be winched down (constrained loosely by the shrouds), until it comes to rest in a pair of rollers on the radar arch at the stern. At this point, the mast has to swing up off its step, rest on or near the winch, and roll forward until the CG is within that of the boat. This not only will allow us to raise and lower the mast when mode-changing between land and sea, but also when approaching a bridge that’s lower than 40′ off the water! Since we’re planning on some river and ICW travel, this is essential. 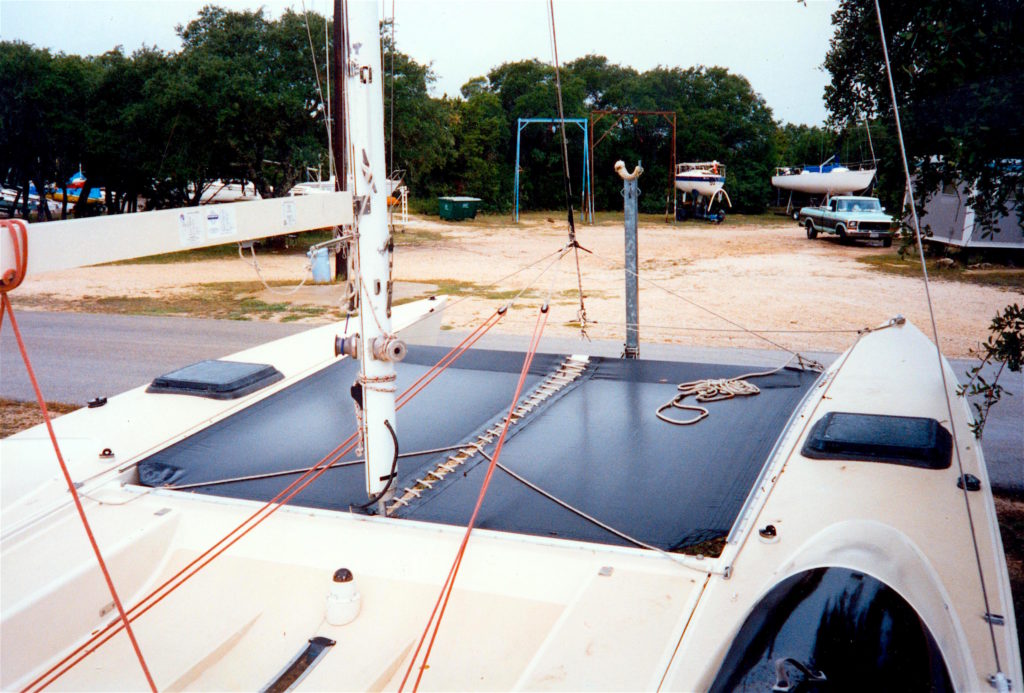 Another major issue involves the 720-watt folding solar array. This is about 80 square feet of surface area, and there are only two possible places to put it when deployed: atop the tramp at deck level, or over the rigid deck as a cabin roof. In the former case, which is simplest, the 24 modules (30 watts each, 20×24″) are accordioned into a stack that is mounted athwartships just forward of the tramp. To deploy, we simply unfold the whole thing and lay it across the tramp, cinching it down along the sides to prevent problems with wind and water. (It is slightly frustrating that the 4-by-6 module array ends up with no exposed solar face when folded in this way, but I’m sure that’s a soluble problem.) The other idea is to perform a similar unfolding maneuver, but have rollers at the ends of all the hinges that carry the modules along an elevated track to form a convertible cabin roof. This can have zip-on fabric sides that extend over the cockpits, and otherwise be a useful space, but we would have to move jib tracks, change the centerboard to pivot (a good idea anyway), and reroute a few lines. To be truly comfortable, we might also want to raise the boom a bit, but the height is not bad as is and doing so involves a performance hit. I should add that there is currently no good place for Faun and me to comfortably share a berth, given the width of the hulls — in mild conditions we’ll want to tent over the tramp or do something similar with the main deck. So this could fit right in, as long as it doesn’t complicate sail handling overmuch…

Finally, one of the Truly Major Issues here involves our actual working and living space. We have two hulls in the Stiletto, one for each of us, and they are not exactly palatial unless viewed beside the Fulmar. We had hoped to embed recumbent bicycles into the hulls as our primary seating area, auxiliary power generation system, and deployable land transport — though I still like this idea in principle, it badly impacts access to the berth areas. Abandoning that for now, the image I have is a rotating, sliding seat, allowing easy crawl-through access to the berth, comfortable forward-looking piloting with full helm control and console use, and backward-facing use of utility work areas (a lab/comm workstation in one hull and galley in the other). The bunks fold up to provide access to head, gear stowage, tankage, batteries, and so on; the bows are available as sail lockers and additional provisioning. The nice thing about this is that I can keep the console areas clean, limited to the Macs, navigation, and system monitor displays — moving the bulk of our control systems, power management, comm gear, and the like to the lab behind my seat where it won’t be so intrusive. There’s actually a moderate desk space there, giving me a small work area and chart table that can open to expose the systems for maintenance. 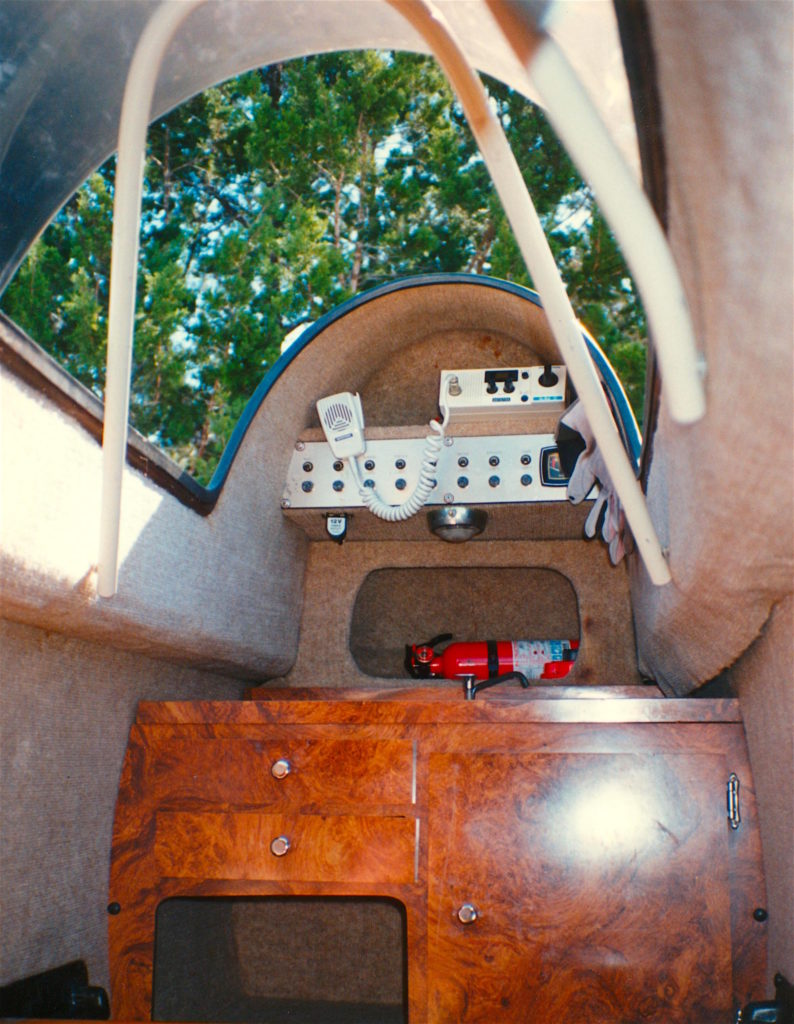 As you can see, this possible Microship substrate would require some interesting mechanical engineering, but it is large enough to do the job without turning into a yacht. One of the reasons it’s so appealing is that I have found no other multihull that provides trailerability, adequate working/living space, good performance, and a high-tech “feel” at anywhere near this price (just under $15,000). The F/27 is a lovely machine, but even used ones cost $60,000 or more and, as Faun pointed out, they carry the cultural connotations of a BMW. Used trimarans abound in our price range, such as the venerable Searunner 31, but they cannot be made small enough to trailer (and we simply can’t relax that spec — not only do we have to do the development work in a land-based lab, but open-ended wandering requires occasional portages). Cheap monohulls are all over the place, but they don’t have enough deck for solar area and I don’t find them too interesting anyway. In short, we may at last be looking at a reasonable solution that does not involve a lengthy foray into boatbuilding or a radical departure from our basic design goals.

I look forward to any comments you may have… I want to make this decision soon, while the opportunity exists (although Stilettos do appear frequently in the classified ads in Multihulls Magazine, this one is in excellent shape, has rarely seen saltwater, and I have a good rapport with the owner).

Meanwhile, we press on — things are heating up with the project teams and overload is a way of life. And thanks go out to Adobe for the donation of PageMaker 5.0, which just arrived yesterday!