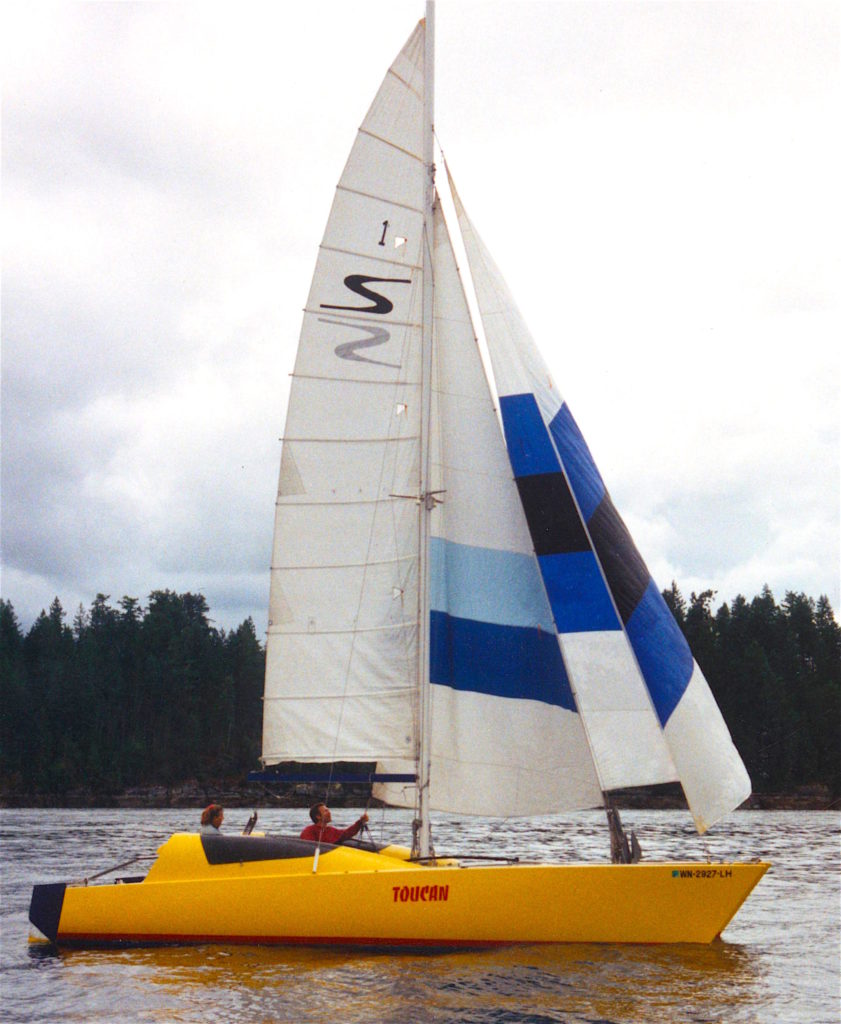 In all my years of system engineering and designing strange contraptions, I have never encountered such a plethora of trade-offs as I am finding in the selection of a boat. Weight, internal space, seaworthiness, appearance, solar surface, comfort, trailerability, hackability, speed… all these and more conflict in ways that make the old gain-bandwidth and freedom-security trade-offs appear trivial by comparison. After posting about the Texas trip to see a Stiletto 27, my amazing mailing list yielded immediate feedback…

In our last episode (Issue #81), I had just returned from San Antonio where I spent an enjoyable day aboard Charlie Mayer’s Stiletto 27. It seemed like a pretty good choice, given all that we’re trying to accomplish, and I proceeded to the next step… soliciting second opinions. They varied all over the map, as opinions are wont to do, but the general consensus is that the Stiletto is more of a fair-weather, fast, lightweight boat unsuited to heavy loads and offshore sailing. A sampling of comments follows…

Anyone who lived for years on a bicycle ought to be able to squeeze himself into a Stiletto 27. The boat is seaworthy enough that you can use it for coastal cruising. I’d be concerned about offshore work because of the excess weight she’ll be carrying. It’s small and shallow enough that you can take it most anywhere. There are some streams too narrow or too shallow for it, but not many. Your kayaks will let you explore those areas.

Just as important as having a boat small enough for small water is having one big enough for big water. The Stiletto will handle anything you’re likely to encounter on the ICW or the coast of the Gulf of Mexico. You’re better qualified than I to say how it will handle conditions on the Pacific Coast, San Francisco Bay, or Puget Sound.

Greg Sawyer nearly lost his life when his S27 broke up just outside of SF Bay 10 years ago. Greg’s crew was not so lucky.

I believe Peter Wormword developed the S27 to be just a big beachcat, and never really designed (or built) for extended cruising. This becomes more critical when one adds all the weight you are considering.

I don’t think they are safe to sail offshore. For one thing, they never seem to finish the Ft. Lauderdale to Key West because of breakages or just not being able to handle the weather. When the weather gets rough they have to run for shelter. Based on that, if I was on one I wouldn’t want to be more than 10 miles from land.

I raced against a Stiletto 27 in 15 to 18 knots on the Great Peconic Bay on Long Island. The Stiletto capsized and had to be towed to the beach by a pleasure boater. After they pumped the hulls out and the ten of us re righted her on the beach, she limped home…. I was just visiting the area and I don’t think the skipper was very experienced…

I don’t have any direct experience with the Stiletto, although I know what they look like and can understand why it’s attractive — it does have the “look” you’re after.

Charles Kanter, in Cruising On More Than One Hull, chastises the Stiletto Marketeers for putting too much emphasis on speed and not enough on other superb qualities, praises the sailing performance highly, urges the addition of encapsulated flotation compartments, then concludes:

“Are there faster boats? Sure there are. Are there more weatherly boats? Sure there are. But none of those ‘miracle’ boats instantly telescoped onto a specially designed trailer and ramp launched. None easily sailed in and out of an ordinary boat slip. Few were as handsome or of such superb quality and most important of all, none ever made it with the public. That is a lesson for speedophiles.”

And so, we have a demonstration of another aspect of the boat world: opinions about any given design cover a very wide range, and the only way to chart the right course through the morass is by careful averaging and synthesis of all input, considered in the light of one’s own needs…

So where to from here? Well, today Faun and I went to see a MacGregor 36 catamaran — a massive truck of a boat (with two hulls, three crossbeams, and tramps) that can take serious offshore conditions in stride. Construction quality was unexceptional, however, and this particular one has suffered from long exposure to aqua regia (saltwater) and hard living. It is trailerable, though the process is reputed to take a couple of days and is more along the lines of “annual hauling” than “lake hopping.” The general consensus on this boat seems to be that it is hard to handle in precision situations, tricky to beach since the rudders don’t kick up, and extremely heavy… but it is very hackable, will carry a heavy load, and can take all the abuse the sea cares to throw at it. (Sort of the opposite of a Stiletto 27, which is both good news and bad news!) Standing in the boatyard in National City with my camcorder, I had fantasies of welding flanges on the three massive crossbeams and allowing the 2-ton monster to fold gracefully for transition to land mode… 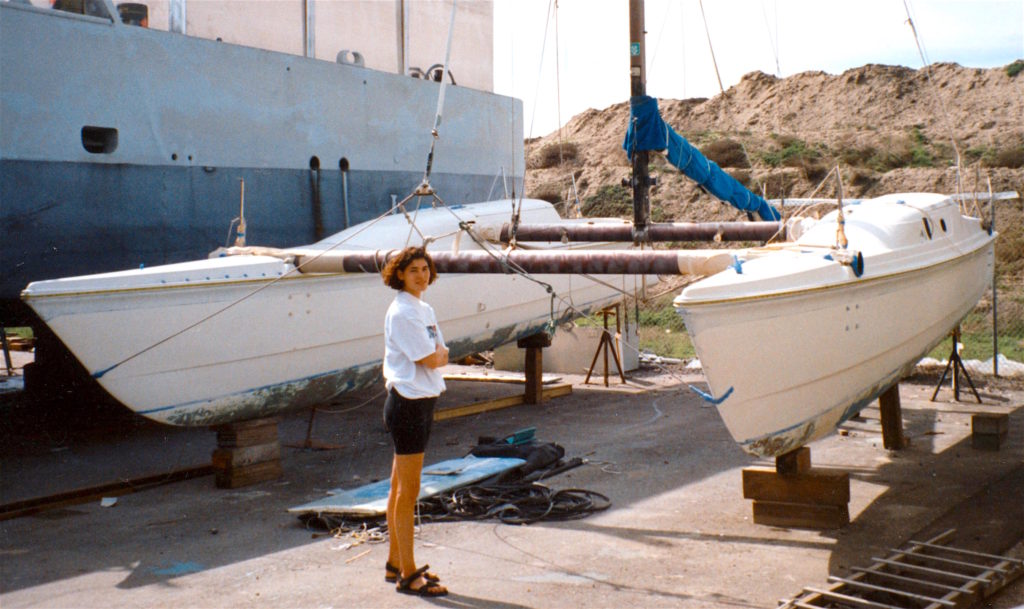 Continuing research turned up the Seawind 24, which sounds very intriguing and much more realistic — information is enroute from Boston where one is for sale. This has a 16′ beam compared to the Stiletto’s 14, a bit more interior room, and excellent construction quality. I’ll keep you posted… time is tight, since we want to have a boat on hand by the start of next quarter to allow the beginning of key mechanical projects.

Meanwhile, our student team is progressing well on the four parallel projects — hub, manpack, pressure, and turret. The pressure guys have greatly simplified the design and figured out how to make it survive processor failure. Information on TNC-RNET interfacing has arrived from PacComm, and we’ll try to have 9600-baud packet running soon. I’ve sketched a reasonable layout of hardware for the Hub enclosure, and am about to steal a couple of New Micros I/O boards from BEHEMOTH. The manpack folk have written their port-expansion code, and are about to begin packaging. The turret is zipping around under low-level software control, and we’re hoping to get the color camera from Sharp soon to package next to the low-light monochrome. The video transmitter for the manpack is expected in a few days.

The garage sale is going well, with unused equipment gradually turning into ship-parts budget, and Faun is going crazy with HTML, PageMaker, our new Microtek scanner, and Adobe PhotoShop. Sunday we gleefully escaped all of this for an afternoon sail on Michael Burkhardt’s Catalina 27, bringing us within a few dozen yards of Dennis Conner’s A-Cup thoroughbred zipping along under full sail out in the open ocean. 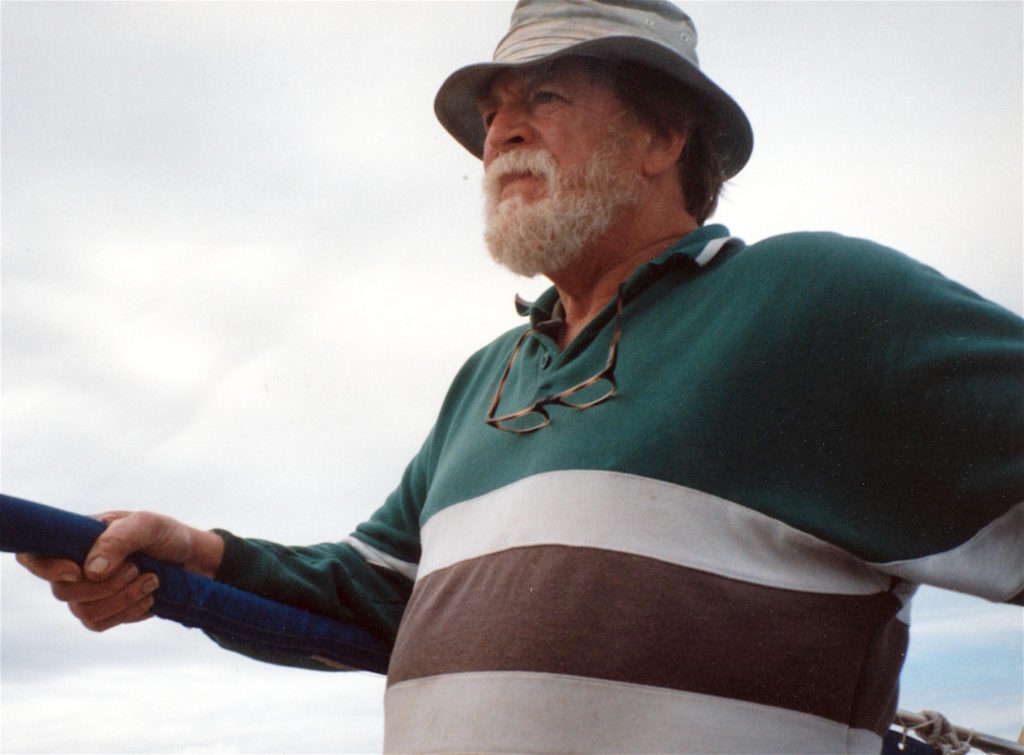 Finally, there’s a story about this project in the March issue of Mobile Office, and some other media is forthcoming… stay tuned…

Cheers from the lab!