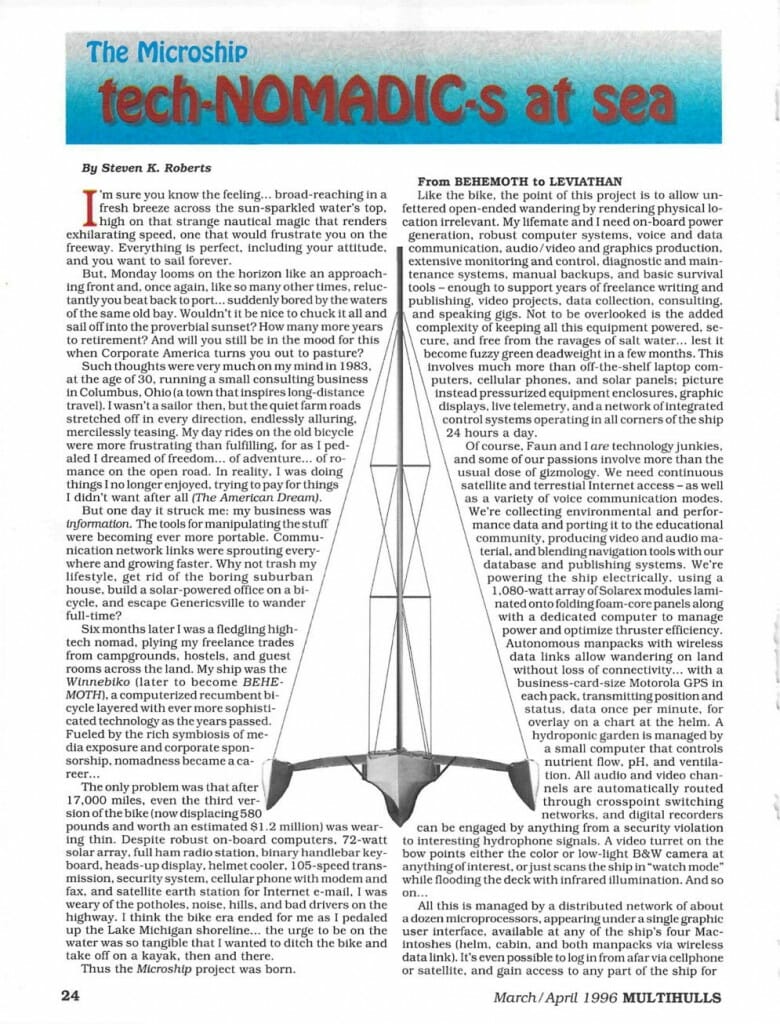 An essential part of the armchair sailing library during the Microship project was Multihulls Magazine, and on rare occasions I found my way into its pages. This article was from my brief (2-year) tenure as the land-based “skipper” of Hogfish, a Farrier-folding tri built by John Walton and Mike Michie before they founded Corsair Marine.

If the cover of this issue turns up, I’ll add it… all I have in the portfolio is the article below.

I’m sure you know the feeling… broad-reaching in a fresh breeze across the sun-sparkled water’s top, high on that strange nautical magic that renders exhilarating speed, one that would frustrate you on the freeway. Everything is perfect, including your attitude, and you want to sail forever.

But, Monday looms on the horizon like an approaching front and, once again, like so many other times, reluctantly you beat back to port… suddenly bored by the waters of the same old bay. Wouldn’t it be nice to chuck it all and sail off into the proverbial sunset? How many more years to retirement? And will you still be in the mood for this when Corporate America turns you out to pasture?

Such thoughts were very much on my mind in 1983 at the age of 30, running a small consulting business in Columbus, Ohio (a town that inspires long-distance travel). I wasn’t a sailor then, but the quiet farm roads stretched off in every direction, endlessly alluring, mercilessly teasing. My day rides on the old bicycle were more frustrating than fulfilling, for as I pedaled I dreamed of freedom… of adventure… of romance on the open road. In reality, I was doing things I no longer enjoyed, trying to pay for things I didn’t want after all (The American Dream).

But one day it struck me: my business was information. The tools for manipulating the stuff were becoming ever more portable. Communication network links were sprouting everywhere and growing faster. Why not trash my lifestyle, get rid of the boring suburban house, build a solar-powered office on a bicycle, and escape Genericsville to wander full-time?

Six months later I was a fledgling high-tech nomad, plying my freelance trades from campgrounds, hostels, and guest rooms across the land. My ship was the Winnebiko (later to become BEHEMOTH), a computerized recumbent bicycle layered with ever more sophisticated technology as the years passed Fueled by the rich symbiosis of media exposure and corporate sponsorship, nomadness became a career…

The only problem was that after 17,000 miles, even the third version of the bike (now displacing 580 pounds and worth an estimated $1.2 million) was wearing thin. Despite robust on-board computers, 72-watt solar array, full ham radio station, binary handlebar keyboard, heads-up display, helmet cooler, 105-spced transmission, security system, cellular phone with modem and fax, and satellite earth station for Internet e-mail, I was weary of the potholes, noise, hills, and bad drivers on the highway. I think the bike era ended for me as I pedaled up the Lake Michigan shoreline… the urge to be on the water was so tangible that I wanted to ditch the bike and take off on a kayak, then and there.

Thus the Microship project was born.

From BEHEMOTH to LEVIATHAN

Like the bike, the point of this project is to allow unfettered open-ended wandering by rendering physical location irrelevant. My lifemate and I need on-board power generation, robust computer systems, voice and data communication, audio/video and graphics production, extensive monitoring and control, diagnostic and maintenance systems, manual backups, and basic survival tools – enough to support years of freelance writing and publishing, video projects, data collection, consulting, and speaking gigs. Not to be overlooked is the added complexity of keeping all this equipment powered, secure, and free from the ravages of salt water… lest it become fuzzy green deadweight in a few months. This involves much more than off-the-shelf laptop computers, cellular phones, and solar panels; picture instead pressurized equipment enclosures, graphic displays, live telemetry, and a network of integrated control systems operating in all corners of the ship 24 hours a day.

Of course, Faun and I are technology junkies, and some of our passions involve more than the usual dose of gizmology. We need continuous satellite and terrestrial Internet access – as well as a variety of voice communication modes. We’re collecting environmental and performance data and porting it to the educational community, producing video and audio material, and blending navigation tools with our database and publishing systems. We’re powering the ship electrically, using a 1,080-watt array of Solarex modules laminated onto folding foam-core panels along with a dedicated computer to manage power and optimize thruster efficiency. Autonomous manpacks with wireless data links allow wandering on land without loss of connectivity… with a business-card-size Motorola GPS in each pack, transmitting position and status, data once per minute, for overlay on a chart at the helm. A hydroponic garden is managed by a small computer that controls nutrient flow, pH, and ventilation. All audio and video channels are automatically routed through crosspoint switching networks, and digital recorders can be engaged by anything from a security violation to interesting hydrophone signals. A video turret on the bow points either the color or low-light B&W camera at anything of interest, or just scans the ship in “watch mode” while flooding the deck with infrared illumination. And so on…

All this is managed by a distributed network of about a dozen microprocessors, appearing under a single graphic user interface, available at any of the ship’s four Macintoshes (helm, cabin, and both manpacks via wireless data link). It’s even possible to log in from afar via cellphone or satellite, and gain access to any part of the ship for performance analysis, security check, or system upgrades.

Ah yes, I almost forgot… under all this is a rather unusual multihull!

The project has evolved quite a bit from its modest beginnings as a road fantasy. I leapt headlong into sea kayaking, conceived a catamaran of linked kayaks and then a folding amphibian recumbent pedal-tri, upgraded the center hull to a sleek custom 30-footer with detachable double kayak amas, then tossed that plan after getting an education in hydrodynamics from marine architects (kayaks make lousy amas). Impatient for adventure, I purchased a Fulmar 19 micro-trimaran, borrowed another for Faun only 2 months after we met, and took off with her on a rollicking 250-mile jaunt through Puget Sound and the San Juans – with a windy all-nighter, up a freighter lane in the fog, as our first leg!

The young relationship survived that trial-by-fire (water?) and we pressed on, slowly arriving at the conclusion that full-time adventure requires a boat of live-aboard scale (despite the glory in using inappropriate tools). On a bicycle tour, you can park and step off anytime you need to eat or sleep… but not so on a boat.

We put the Fulmar up for sale and launched on a quest for the perfect multihull for our needs – a task constrained by a freelancer’s budget and the need to accommodate extensive customizing. After long discussions with many notable designers in the field, we homed in on a folding tri in the 30-foot range, since trailerability is essential. The only problem, of course, is that the price tag on such boats has the decimal point one digit too far to the left… we actually began to contemplate building from scratch…

In a supreme stroke of luck, however, we stumbled across the boat shown in the photo. I was about to politely hang up the phone after Mike Leneman quoted me a price on an unfinished F-31, but gave him a quick rundown on the project just to be polite. “Wait!” he cried. “I have your boat right here!”

Originally (and, I hope, whimsically) named Hogfish. she was built in 1983 by John Walton and Mike Michie before the start of Corsair Marine. The boat has hardly ever been sailed, and has spent most of the last decade sitting in dry storage. The original carbon wing mast has become the billboard for Multihull Marine in Marina del Rey, and we’re probably going with a deck-stepped fractional sloop rig similar to the F-31. We’ve been in communication with Gino Morrelli and John Marples about the overall integration of lab and other accommodations into this surprisingly spacious aft-cabin craft. (Construction is S-glass/epoxy over Klegecell core, with carbon-fiber crossbeams.)

At this writing, we’re working on a weight study and a CAD model of the general layout. Obviously, there’s a long way to go – deployable Current Designs Storm kayaks that can be catamaraned into a dinghy, hard dodger to increase cockpit security and utility, aft berth, integral lab and control console below, helm system, hydroponic modules, tankage, folding solar arrays, thruster, sensor systems, antenna and radome mounting… but that’s the joy of a project like this! We’ve spent the past two years working with UCSD engineering student teams on the control network, and are now in transition to our next lab site.

We maintain an active Web site on the Internet (https://microship.com), and my e-mail address is wordy@microship.com (NOTE: both corrected from the article). We’re actively seeking experienced builders, equipment sponsors, clever ideas, and any other contributions from the multihull community. Through our on- and off-line publications, we will share the designs of our technomadic tools in return…