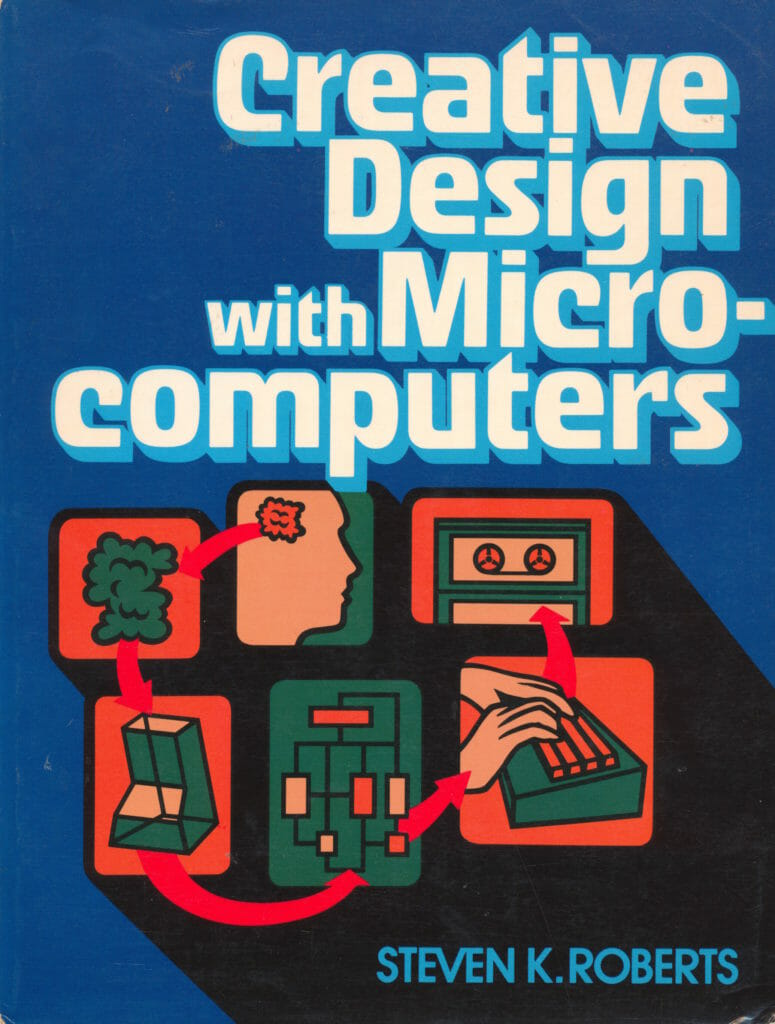 This was my magnum opus from the pre-technomadic epoch… a wide-ranging textbook about industrial control system design. Foolishly, I originally named it Industrial Design with Microcomputers, not knowing there was an entire unrelated field called “Industrial Design”; this later softcover edition came with a title change that still didn’t quite capture the content, but was at least more inviting. I believe this review was the first that was written to address the new edition, though previous reviews were also quite positive. The timing was interesting… this was the month that I took off from Ohio on the computerized bicycle, also covered in the same issue.

At a time bookstores are stocking shelf after shelf of introductory books to the subject of microcomputing, it’s refreshing to find a serious volume on something other than elementary applications. Steven K. Roberts’ book Creative Design with Microcomputers, is just such a work, dealing with microcomputers applied to a wide variety of applications outside the home or small-business office.

Since such applications are far less visible than the highly touted and advertised home and office uses, we often forget how important microcomputers are for controlling and automating things like manufacturing processes and machinery — applications that often push microcomputers and system designers to their limits. Such applications traditionally have been in the domain of specialists. Now, Mr. Roberts’ book comes along as an excellent reminder of those uses, as well as a delightful explanation of the hows, whys, and wherefores of industrial-process control and system design.

Drawing on his extensive experience with real systems, Roberts has skillfully approached a difficult and often baffling subject. His craftsmanship as a writer and a designer are evident in an admirably constructed presentation of subjects as diverse as hardware interfacing, artificial intelligence, software design, and others.

Perhaps the most remarkable thing is that this book is readable. One doesn’t need an engineering degree to understand the material. Yet it’s not over-simplified. With logical progression through subjects, extensive illustrations, and thorough explanations of terms, Roberts leads the reader through the complex world of system design, following a clear, understandable, enjoyable, and even philosophical path.

Of course, the subject does limit the readership somewhat. A book of this type is not aimed at the novice, so the first-time computer hobbyist or small-business operator isn’t likely to need it. However, intermediate and advanced computerists or those with specific interests in industrial processes and system development will find the book packed with information. The discussions of software tools like operating systems and software tactics such as dealing with data are worthwhile reading for anyone, provided the reader has some familiarity with the fundamentals of microcomputing.

Creative Design with Microcomputers promises to be a valuable addition to reference libraries for industrial engineers, system designers, programmers, and virtually all “serious” computer users.

The hardcover edition, titled Industrial Design with Microcomputers, with a cover price of $28.95, may be a bit expensive for some people, though this reviewer considers it worth the price for anyone seriously interested in the subject. It is produced to higher quality standards than most computing books released these days, and it’s by a major publishing house.

For those who are cost conscious, however, the retitled softcover edition from Prentice-Hall should be on the market this month. The new title better reflects the contents — and it carries a considerably lower price, making the information more easily affordable.