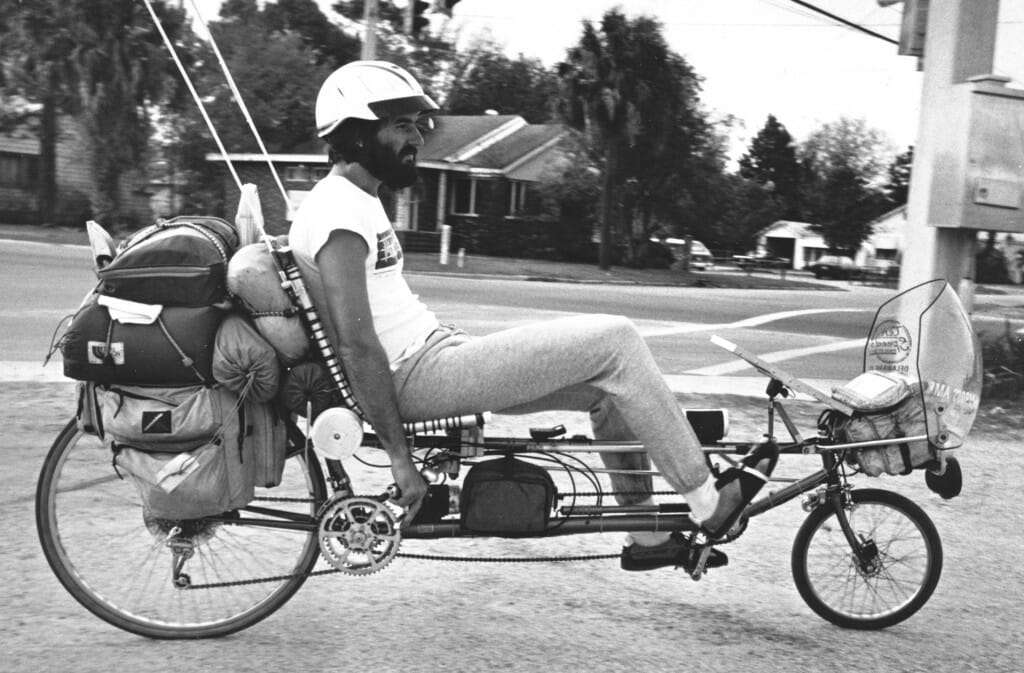 This was a hugely pivotal article in my unfolding adventure. First, the author unwittingly named the whole escapade, and second, this was published just before launch. That meant that almost every CompuServe subscriber had a heads-up that there was a guy on a computerized recumbent bicycle taking off around the country, posting tales online (paleo-blogging) and looking for places to stay. Almost immediately, I began receiving invitations… over the 10,000 miles that I was allied with CompuServe, there were countless connections that made life easier… thanks to this article and my monthly column that followed.

As the first printed piece about my trip, it was also the way I chose to let my parents know that their crazy son was selling his house in suburbia, giving up the illusion of security, and… WHAT?  A bicycle?  My mother called immediately after her copy arrived in the mail. “What’s the matter, Steve? You going to be a bum all your life?”

At the time this article was written, I had not yet named the bike (nor even seen it… initial planning happened in parallel with framebuilding). The photo above is the Winnebiko a few months later in Florida…

Just as the public is getting fairly blase about the “electronic cottage,” a new technological marvel has wheeled onto the scene that’s sure to raise a few eyebrows: the “electronic bicycle.” Ah, come on now — get serious.

Thirty-year-old Steven K. Roberts — inventor, author, and computerist extraordinaire — is very serious about his planned cross-country technological journey that should garner a gawk or two from more traditional travelers. Roberts is building and equipping a recumbent bicycle with two microcomputers and other assorted pieces of hardware that will make him, literally, both a tourist and an office on human-powered wheels.

A free-lance writer with three books and numerous articles to his credit, Roberts is negotiating with several publishers who want a book about his trip. His writing won’t be limited to his on-the-road adventures, however. He plans to keep up his other free-lance commitments while traveling, including other books, magazine articles and marketing material for corporate clients.

Why the unique attempt to combine work and play?

“The whole trip offers an opportunity to test the viability of the information society,” Roberts explains. “I want to see if I can maintain a heavily interactive, information-oriented professional practice involving a lot of clients, with an absolute minimum amount of paper — and complete freedom from the confines of an office. I’ll exist in a totally asynchronous fashion.”

A certifiable genius and self-taught engineer and software designer, Roberts’ conversation alternates between hardcore engineering-ese (“From the standpoint of optimizing the efficiency of the interface, it’s important to have a good impedence match between the body and the bicycle.”) and an appealing free-spirit boyishness (“The trip sounds like a hell of a lot of fun that will combine all sorts of motives — adventure, meeting people, doing something bizarre, and having interesting material to write about.”)

His interest in computers, he says, is rooted in a childhood fascination with electronics. After graduating from high school at the precocious age of 16, he had a “brief flirtation” with engineering school before leaving to spend a year on the road hitchhiking, biking and hopping freights. “Just playing the harmonica, riding the rails — it was great.”

But when he decided to return to his home town of Louisville and look for a job, he discovered corporate America didn’t think much of his wanderlust and voracious appetite for self-education. “There was a world of knowledge I wanted to know, but I had decided there were more efficient ways than college to get it,” Roberts explains. “The line I kept hearing was, ‘Sorry, son, your lack of a degree is inconsistent with our standards of professionalism.’ “

By 1973, he had developed what was then an unusual habit: an avid interest in computers. To support it, he started his own parts business, Cybertronics, which supplied integrated circuits to hobbyists. The proceeds were used to build his first computer, a project that “totally seduced” him, he says. Dubbed BEHEMOTH for “Badly Engineered Heap of Electrical, Mechanical, Optical, and Thermal Hardware,” the machine, an 8008-based computer with an external stack and other TTL enhancements, was designed for practical as well as esoteric reasons. “I got tired of building separate machines for everything I wanted to do,” Roberts explains. “I needed the generality of a computer for both speech and music synthesis, which were my passions at the time.” [Lots of details of that system are here]

At this point, Roberts — one of the very few people in the country building home computers — was discovered by a Louisville television station when he and BEHEMOTH performed a Christmas duet. (Since BEHEMOTH lacked fingers and an interest in historical instruments, Roberts graciously agreed to play the baroque recorder while the computer hummed away on the synthesizer.) Suddenly, the very corporate types who had rejected him because he lacked a degree were calling with job offers.

One of them was a very tasty freelance offer from the Honeywell Corp. to write the environmental control software for a college campus’ energy management system. “I made a lot of mistakes,” he recalls, “but it was a good way to learn how to do a system design.” It was also the break he needed to make it — at age 21 — as a highly-paid consultant designing custom industrial control systems for the likes of Corning Glass and other big companies. The next few years were busy and profitable ones. He went out of the parts business and for a while owned Louisville’s only computer store. An admitted “information junkie,” Roberts’ self-education grew through trade journals and data sheets. The decision to write about what he had learned along the way was a natural one, and in 1977, he began to submit articles to hobby and trade magazines.

He discovered he enjoyed writing for a number of reasons — recognition, freedom, “conjuring something from thin air,” — and decided to work into it as a full-time profession. By this point, he was tired of the consulting business and proceeded to have a mid-life career crisis a dozen or so years early. “I was sick of the engineering business by then,” he recalls. “I had ruined my hobby, and I wasn’t tinkering any more. All of a sudden I was just doing it as a business, and it was tragic. I got very depressed about it because building BEHEMOTH had been such a passion.

“I realized that the feeling had gone away completely and that computers were just tools — cantankerous beasts that had to be beaten into shape for a customer by a deadline. The whole business,” Roberts said sadly, “had lost all its charm.”

But the appeal of writing hadn’t, and Roberts proceeded — after a brief stint as a full-time employee with a Columbus, Ohio, firm — to make it a full-time career. The free-lance writing life, which includes regular technical writing assignments from corporations, has been a profitable, if sometimes uncertain one. “The corporate stuff provides steady income but no fame and glory,” Roberts sighs. “The books and magazine projects offer lots of fame and glory but uncertain amounts of money. Doing both keeps the balance and pays the bills.”

His bike trip, tentatively scheduled for late fall, will not, he reassures clients, interfere with his business. He will use the CompuServe network for communication and, of course, BEHEMOTH will be “alive” with an autoanswer modem — under the control of his manager. Roberts will take equipment to download files from pay phones to the waiting BEHEMOTH (which, by the way, is now BEHEMOTH 3 — a Multibus-based MICROMAX System 1000 built especially for him around a Monolithic Systems MSC 8009 card.) A Walkman-style radio will keep him company, and a mouthpiece attached to his helmet will enable him to dictate as he rides; he’ll transcribe tapes as time permits onto his word processor.

Two computers — one to monitor time, speed, cadence and distance via liquid crystal display read-outs — and the other a word processor, will be part of his mobile office. He’s tentatively planning to purchase the very small, very light, portable Model 100 by Radio Shack as his second computer. Obviously, equipment weight is a big factor. “There are so many power devices on this thing,” he admits, “that it could take a lot of batteries – and batteries are heavy. So I plan to use one central battery with three ways to recharge it — a generator, a solar collector and a switching power supply that can be plugged in when I stop for the night.”

To keep current on the technologies he writes about, he’ll make extensive use of on-line information retrieval systems, college libraries and various conferences around the country. Along the way, he’ll take time to visit friends and family. His sojourn is not a race, and — although it’s a first — it’s not a publicity stunt. It’s an adventure, plain and simple — one that Roberts hopes will combine the best of two worlds.

“I have one central conflict that has plagued me all my life, and that’s freedom versus security. This whole trip,” he says with satisfaction, “seems like the optimum tradeoff between the two.”

Steve will be visiting CompuServe subscribers all over the country for book and article material (as well as companionship).