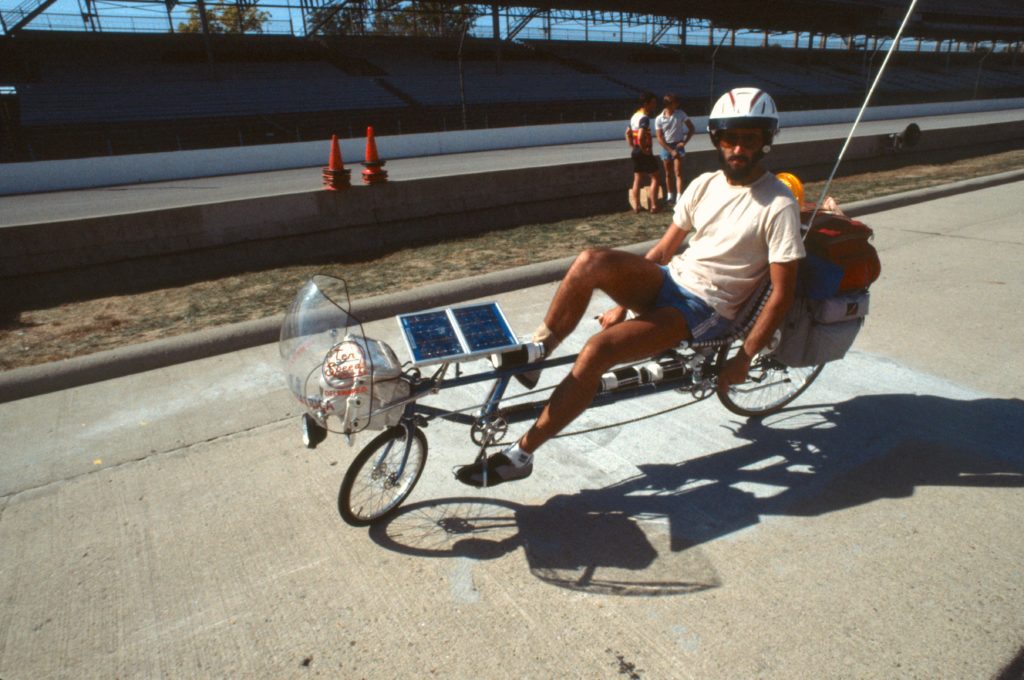 This was written in early October 1983, during the 762-mile shakedown cruise that began the adventure aboard the Winnebiko. I was still feeling my way and getting to know the tools, and this is #2 in a monthly column that ran for over a year and a half (this was the origin of the Computing Across America book name, though the content there was much more substantial than these 1-page magazine columns).

Photo above is by Jon Goell, taken on the Indianapolis 500 Speedway during my participation in the International Human Powered Vehicle Association races.

There is no conversational door-opener more potent than cruising into town on a bizarre recumbent bicycle equipped with solar panels, extracting a Model 100 computer from the luggage rack, and hooking up to a pay phone via the acoustic coupler.

“You with NASA?” asked a farmer in eastern Indiana, climbing out of his dusty pickup truck after a morning’s harvest. “How d’ya steer that thing? What’s that yer typin’ on?”

I have become an agent of future shock.

That’s a rather entertaining role to play if you happen, like me, to be a flagrant extrovert. Starting a conversation involves nothing more than gilding up on the bike and waiting for the inevitable questions. Or perhaps pulling the Model 100 out of the briefcase in a restaurant and tapping on the keyboard until food arrives.

This trip seems to have captured the imagination of the public. The curiosity and acceptance I’ve received have been quite a boon. After a 55-mile death march into a brutal headwind, I arrived in Bloomington, Ind., exhausted and hungry. I stopped in a little restaurant called the Runcible Spoon, and within moments I found myself in animated conversation with a scuba diving instructor from Indiana University.

He handed me a key to his apartment and told me where to find towels and a modular phone jack. As the evening progressed, I garnered more and more invitations until the question of where to stay became not one of circumstance but of choice.

Of course, it is the technology that triggers the initial interest — this outlandish blue machine whirring through the streets of Bloomington with lights ablaze (including a xenon strobe atop the antenna) is a sight curious enough to stop passersby in their tracks. Add to this the fact that on a bicycle I am non-threatening. Perhaps a harmless eccentric, but certainly trustworthy. The same technology appended to a motorcycle would net little more than suspicion.

But the real fascination with this escapade stems, I suspect, not so much from the magic of the technology — everyone has at least heard of micros, tiny cassette recorders, solar panels, and so on. Instead, it is the fact that someone has actually woven all this into his lifestyle. My “Winnebiko” is not a trade show exhibit or a deliberate attempt to celebrate future technology; it is a functional office-on-a-bicycle, and it works.

It works very well. One of my original fears about the trip has been thus far unfounded: The equipment is holding up perfectly.

My legs still work reasonably well, and the bike has suffered only a flat tire and broken kickstand to date.

The Model 100 is a fine little machine, and has so far stood up to spilled candle wax, extended vibration, and heat.

CompuServe unfailingly responds with that familiar “Host Name” prompt no matter what burg I happen to be dialing from — although it would be nice if every town had a node so that long distance charges could be held to a reasonable level.

Together, CompuServe and the Model 100 are indispensable. Besides being used as business tools, they act as a notepad, an address book, a mailbox, a calculator, a scheduler, and more. Today, the machine reminded me to send a thank-you note to the family I stayed with in Indianapolis. A file in my CompuServe work area holds the names and addresses of hundreds of people who have invited me to visit, and the issuing of a simple command will tell me who and where they are.

In short, this works, and that is the message that is being implicitly communicated to most of the people I meet. One lady I chatted with the other day observed, “Gosh, I had no idea this was possible. Last I heard, you had to be a math wizard or something…”

Steve Roberts is currently living on his bicycle and is checking into the system daily. He appears on CB (as Wordy) when he’s in a node city, and is publishing a more current account of his adventures in a CompuServe database (GO CAA for details). If you would like to contact Steve Roberts, his CompuServe User ID is 70007,362.