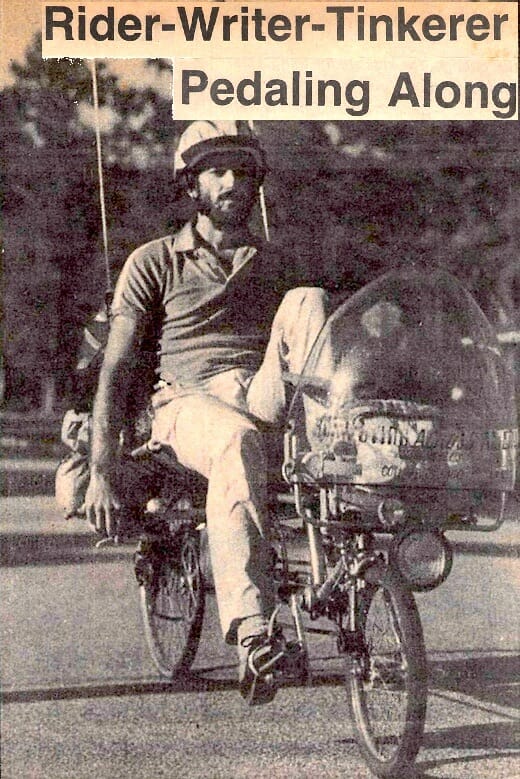 I was starting to get into the groove at this point, and was in Savannah on Thanksgiving Day to visit an old friend from Louisville. This turned into a fun book chapter (including a crazy trip over the tall Savannah River bridge in driving rain and high wind, and the tale of my recent discovery of my biological parents). A police officer saw this story, and lay in wait for me enroute south: He walked toward me, studying me inscrutably through silvered sunglasses. He stopped with his hands on his hips and looked me over, one finger tapping unconsciously on the butt of his service revolver. “Maaan…” he said in the kind of lazy, vaguely stoned voice you might expect of a jazz singer, “You be cruisin’, aintcha?”

Steve Roberts is a writer and a rider who is pedaling around the United States on a homemade bicycle.

And, while he’s riding, the 31-year-old Roberts is writing magazine articles on a small word processor and transmitting them back to his assistant in Ohio. His assistant then sends the stories to magazines such as Popular Science and Today.

The self-described “hi-tech generalist” is in Savannah this weekend on the southern leg of his bicycle trip. He leaves tomorrow for Brunswick. Roberts left Columbus, Ohio, Sept. 28 on a “one-year bicycle odyssey around the U.S.” But his mode of transportation is no ordinary two-wheeler. Roberts, who is a freelance writer, designed and built the bicycle he is riding.

The unusual looking vehicle is about 8 feet long and low to the ground. A front windshield is lettered with “Computing Across America.” Solar panels, which power the headlight, are behind the windshield.

Roberts is an engineer, of sorts, who turned to writing full-time about four years ago. And what could provide better writing material than a trip around America?

He said he has had “a lot of crazy encounters” since he started his trek around the country.

While pedaling through Maryland, Roberts came across a band of convicts cleaning up a truck accident. A truck loaded with pastries had gone over the side of a hill and the sweets were everywhere.

He said the convicts were extremely curious about his bicycle and his supplies. The first question they asked was, “Do you have a gun?” They soon discovered that Roberts’ only weapon was a computer.

But the story ended on a happy note. The convicts loaded Roberts’ bike with sweets of all kinds before he went on his way.

Roberts has spent many nights in college towns, where he has found students to be curious and hospitable. The college kids gather around his bike and the conversation gravitates toward his accommodations for the night. More often than not, he is invited to spend the night in a dorm or apartment.

From Brunswick Roberts will travel to Florida and then out West. He is timing his trip so he’ll be going north in the spring. It’s not easy to pedal through snowdrifts.

While in Savannah, Roberts is staying with Tom Rouse and his family. Roberts and Rouse are old friends from the days when they both lived in Louisville, Ky.