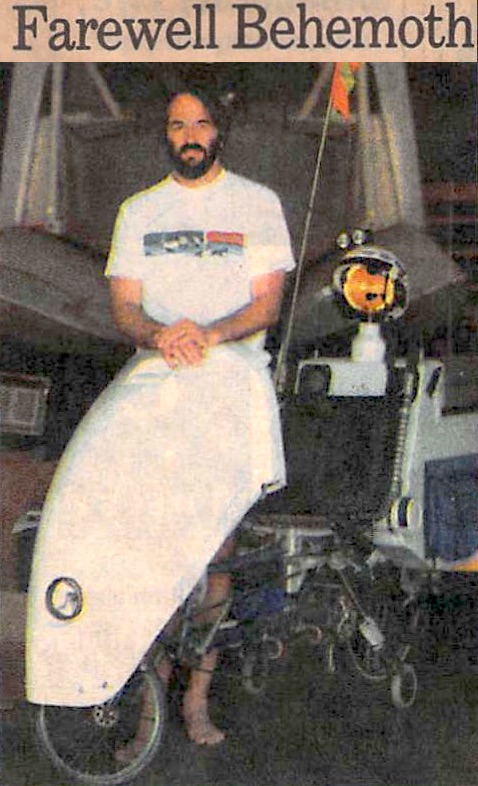 King of the Information Highway

Photo above: “Steve Roberts and his talking, computer-equipped bicycle have traveled thousands of miles together.”

Steven Roberts is an analytical man who knew better than to become too attached.

He and his friend, whom he calls Behemoth, had traveled thousands of miles together. If Behemoth did not save Roberts’ life, he certainly sustained it. But Roberts always knew this day would come — the day to say goodbye.

Very soon, Behemoth, a 580-pound recumbent bicycle that Roberts packed with the computer power of a space ship, will be history.

This isn’t simply about a man and his bicycle. For while Roberts, 43, is simply a man, Behemoth is not simply a bicycle.

Behemoth is 12 feet long, carries a Mac and two IBM compatibles. Its equipment includes a cellular phone, a fax, a satellite transmitter and receiver, a ham radio, solar panels for power, a handlebar keyboard and a mouse Roberts can manipulate with his head as he rides. Behemoth also talks, with a heavy computer synthesizer accent, but it’s talking nonetheless.

It was a glorious machine in its prime, which is not what Behemoth is in now. Instead, like an aging elephant, Behemoth has returned to Silicon Valley to die where it was born. It sits in a Santa Clara warehouse surrounded by Roberts’ new loves: Faun Skyles, a 25-year-old human, and Microship, a 30-foot trimaran hull that Roberts and Skyles plan to pack with computers and launch in early 1998.

“I have very warm feelings for Behemoth,” Roberts says. “But there comes a point when you say, “OK, I’ve done it.'”

Such is the peril of high-tech relationships. The bonds between people and machines are inevitably broken by the incredible pace of innovation. Silicon Valley is not a place for permanence, nostalgia or sentiment. Sure, Roberts has feelings for Behemoth, which in its current and two earlier forms carried him around the country for more than a decade.

“That changed my life,” Roberts said glancing at the idle bike.

But that was then.

In 1983, Behemoth was just the thing. That’s when its prototype, the Winnebiko, carried Roberts away from the Midwest and his drab suburban existence.

Roberts spent the next dozen years pedaling, using the Internet to make new friends and keep in touch with the world. He camped and stayed with those he met on the Net. He lived on freelance writing, paid speaking engagements and computer consulting work.

He built and perfected Behemoth with the help of high-tech sponsors who donated gizmos and volunteers who donated time. He wrote a book.

And then one day, pedaling through Wisconsin along Lake Michigan, it struck him. Behemoth was through. It was time for the next thing. An innovation. A boat.

So, for two years, most recently in the Santa Clara warehouse, Roberts and Skyles have been assembling the Microship. They are outfitting it with four computers, video cameras to beam pictures to the Web, a satellite navigational system and a solar-driven power plant.

They have a ways to go, but one day they will sail. At best, the old Behemoth will tour Silicon Valley as an oddity at brown bag lunches. It is a fate Behemoth does not relish. This we know, because Behemoth said so.

“Big, stupid boat,” Behemoth croaked in its synthesized voice recently. “Steve. Steve, are you ever going to ride me again?”

Roberts had no answer. He simply kept about his work.