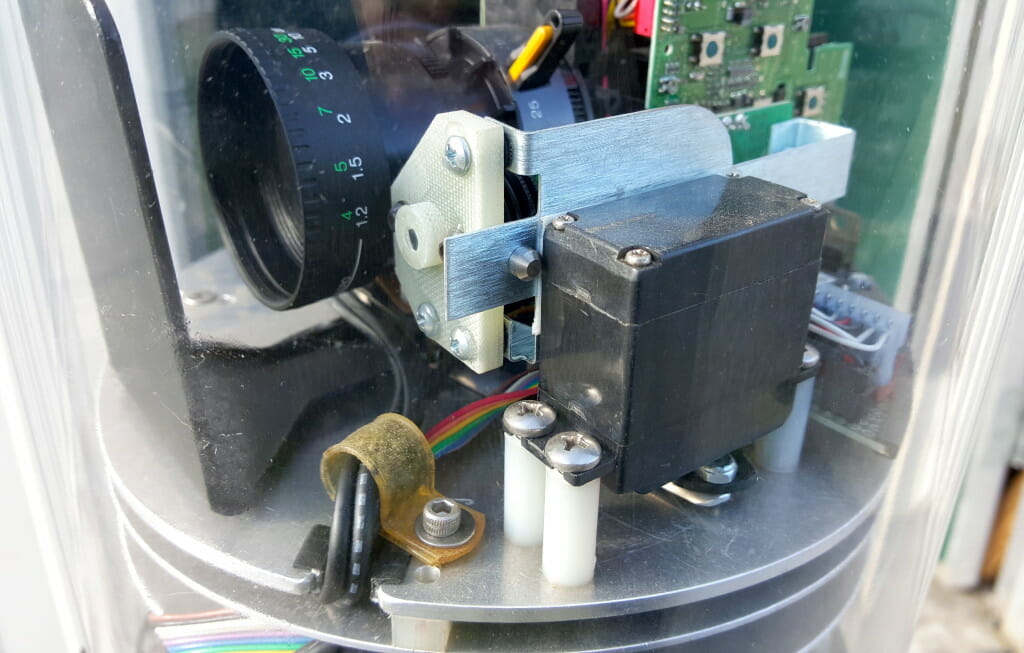 With every passing hour our solar system comes forty-three thousand miles closer to globular cluster M13 in the constellation Hercules, and still there are some misfits who continue to insist that there is no such thing as progress.

Ahhhh, these are the moments I live for. The *real* goal of all this, of course, has more to do with cuddling with my sweetie on the foredeck in the evocative glow of a tropical sunset than whooping it up solo at 3 AM when an embedded control system passes its first primitive interface tests, but hey… we take what we can get. Most recently, we’ve knocked another major item off the list.

The video turret has grown significantly since UCSD engineering students did the initial fabrication and motion control. I kept the original PWM software, but rebuilt the interface hardware and everything on the platform. This turned into a much larger project than I realized, as is routine for anything electronic.

The first change was the physical installation of the new zoomable autofocus color camera head (with Canon optics) from George Martin. This required milling out a hole in the platform, some minor hacks to the camera to allow mounting, fabrication of an NTSC combiner board, cabling for external zoom and autofocus override, and installation of a servo-controlled shutter to protect the CCD from direct sunlight. In our last installment (#106, missing from the archive), most of this was physically in place but no control electronics yet existed to run it.

Well, now it works. I whipped up a little perfboard assembly that carries a pair of L293D H-bridge chips, linked to a newly added port on the node board via ribbon cable that parallels the camera cables through the turret spiral. This port (B) takes care of powering on the servo (from the 6.5V generated down on the processor board for the camera), sending it the two flavors of pulse trains required for open and close position, selecting between auto and manual focus modes, driving the camera’s focus motor each way, driving the zoom motor each way, and power controlling a small diode laser that is aimed, just for amusement, in the same direction as the color camera. New circuitry also handles camera power switching.

I extracted what I could from the documentation and did some real schematic capture to document the crazy thing — which turned into two very dense sheets in DesignWorks. (This software has become an essential tool for defining the control systems.)

As with every project, this contained countless lessons and challenges. The L293D driver chips, for example, are very easy to use but not quite as lovely as they look — source and sink output saturation voltages range from 1.2 to 1.8 volts, meaning that the part induces a horrendous voltage drop that translates into marginal operation of some loads and a lot of heat dissipation. They shoulda used FETs, and had I read the spec sheet closely I probably would have built my own drivers. It will be interesting to see the effects of driver operation on the upcoming thermal stress test, in which an on-board temperature sensor attached to a 68HC11 analog input will record time-stamped temperatures (along with a separate log of ambient at the Hub) while the turret sits static, scanning at low and high speeds, and running the color camera with all the trimmings.

I did make one happy discovery — for about a year, I’ve been meaning to try a pair of Linear Technologies LTC485 CMOS line drivers/receivers in place of the stock 75176’s that suck about as much power as the rest of the processor board put together. They work fine.

A not-so-happy discovery is an optical problem. While writing the fine focus software today that allows manual override of the camera’s autofocus by sending little pulses to the motor within a “finefocus” loop, I noticed real difficulty in getting any kind of clear image when zoomed in on an object far away. Turns out the acrylic cylinder itself is screwing up the image, though the effect is not noticeable when the lens is wide-angle. <sigh>

The net effect, however, is wonderful, and the video turret is done but for a few minor tweaks, thermal tests, and pressurization. Turning on the color camera from the Hub delivers a pulse train to the servo, pulling the black shutter aside. The camera springs to life and the lens barrel rotates nervously as autofocus kicks in. Remote commands can point the camera in any angle of azimuth, and the 8:1 zoom is software controllable… and to top it off, clicking the laser on the HyperCard control panel puts a red spot in the middle of the scene (hey, we gotta have SOME toys on this contraption… all the rest is so… um… serious, you know?). 😉

Anyway, I’m now writing the documentation for this, which will become one of the new NRL technical monographs (full schematics, FORTH code, mechanical details, and theory of operation). This and the “Grand Central Station” audio/video/serial crossbar system are the first two publications in that series.

Ken Glaeser, who journeyed from Wisconsin to spend three weeks helping on the project, is back at school now, but earned our gratitude by leaving a legacy of progress on many fronts. He built the servo-controlled vane in the turret, finished up the underwater camera but for a rare NPT-to-barb stainless fitting for the cable tubing, built a hydrophone preamp, helped think through the kayakamaran and thruster mounting systems, participated in 8mm VCR interface hacking, opened an access port for the battery junction box under the cockpit, and mounted the first REAL hardware on the ship… the batteries.

This is less trivial than it sounds. We used Faun’s employee discount at West Marine to acquire a quartet of Trojan T-105 golf cart batteries, each 217 amp-hours at 6 volts. These, combined in series, comprise the 24V primary bank that runs the thrusters directly and feeds DC-DC converters for everything else, including a dedicated 12V deep-cycle battery that will present a local low-impedance source for the electronics.

The problem, of course, is that four T-105s amount to approximately 250 pounds… and that’s something you don’t want thrashing about inside a boat when the going gets rough. Accordingly, we took the packaging issue seriously, beginning with a couple of vented Blue Sea Systems mounting boxes with recessed 1/4-20 bosses in their bottom corners. Ken went on a quest for aluminum, at last turning up a cache of 3/16″ plate from a local rem center. He conjured four stringers on the milling machine, bolted them to the boxes with flatheads, and then screwed those down to a plywood thwart thoughtfully left in the boat under the cockpit (the old mounting platform for an ill-advised inboard jetski-style engine). The fit was perfect, and there are 12 robust stainless wood screws for each pair of batteries. Next step is to frame a matching cutout in the cockpit floor for access, raising the surrounding floor to match the level of the new lid and preventing leakage problems by leaving the old floor intact, along with its wimpy scuppers.

This is a big step, and we’re getting close to mounting the Minn-Kota thrusters — electrically steerable mounts for which have just arrived along with the support poles and a care package of related hardware. Power management is the next major electronics project…

Finally, as is becoming customary in these tales, we have a collection of updates and notes…

First, I’m delighted to announce that the first of the four Macintosh PowerBooks is now in-house — a 540 straight from the lab bench of one of Apple’s laptop wizards. All the units will be repackaged without the original plastic, so board sets and bench systems are perfect for this application. This one is going to work right away as the HyperCard and FORTH development machine.

Thanks also go to GeoQuery — they just donated the latest version of their awesome mapping software for the Macintosh. This is unique among mapping systems in that it is designed to seamlessly link geographic info with user databases, allowing such niceties as overlays of contacts and other resources onto local maps or, presumably, nautical charts. I used an earlier version along with TouchBase on BEHEMOTH, and am looking forward to putting it to use on the ship.

We had a fascinating tour of Coherent, the laser company, complete with the odd experience of witnessing 50 femtosecond pulses. These are wee chunks of light consisting of just a few cycles, or whatever waves are made of, and the sensation is a spooky one of being suddenly aware of the gross macro world of our perceptions. We’re now discussing a laser system for the boat that will allow projection of a dynamic “wireframe” sponsor-logo display — vastly cooler than old-fashioned decals and better even than the slide show of scans that I ran on the bike during filmings. We’ll see!

Our host at Coherent, Norm Goldblatt, resurfaced from our first contact many years ago when Maggie and I joined him for a daysail on the Bay. He’s now involved with the Tech Museum of Innovation in San Jose, and we went downtown for the groundbreaking ceremony for their new building. Too early to say, but something will probably happen here…

Thanks go to the father-son Fariss team, who arrived a couple of weeks ago and installed rev. 2 of the lab HF antenna. This one is an 80 meter zeppelin, center fed, close to the roof, and tied to the automatic tuner via a short piece of ladderline. The tuner seems happy matching all bands, though I haven’t had the time to do much poking around for a subjective test. They’ll be back in a few days to run ladder down the wall and mount the tuner where it can be reached (it’s currently drywall-screwed to the inside of the roof).

One of the endless joys of Silicon Valley is the Foothill Flea Market, and the one on June 8 yielded more stainless 10-32 fasteners than I’ll use in a lifetime, a Tektronix scope cart for my 2465 that looked tres geek on Ken’s Yakima kayak/bike rack, and — the real score — a $3 box containing about 2 cubic feet of miscellaneous pneumatic components. If I use only one of the hundreds of fittings, valves, and fluidic gates I will have saved money.

Finally, we’re nudging ever closer to the rigging project. Jim Antrim, a multihull designer of Antrim 30 fame, visited the lab yesterday and spent a few hours brainstorming, examining the boat, and taking measurements. He was most concerned about the robustness of the fixtures holding the crossbeam tension members, declaring them the parts most likely to fail (not including the rudder assembly, which needs a bit of help as well). Also, I had a long conversation with John Marples about the design of the centerboard trunk, and am on the verge of contracting Ron Moore to build both that and the mast step support structure. There’s a very real probability of test sails by the end of summer…

With that, it’s back to work! As always, we’re happy to receive suggestions, donations, or chunks of on-site hands-on time… the lab is a playful place when a lot of us are in hack-mode. (And even when we’re not…)