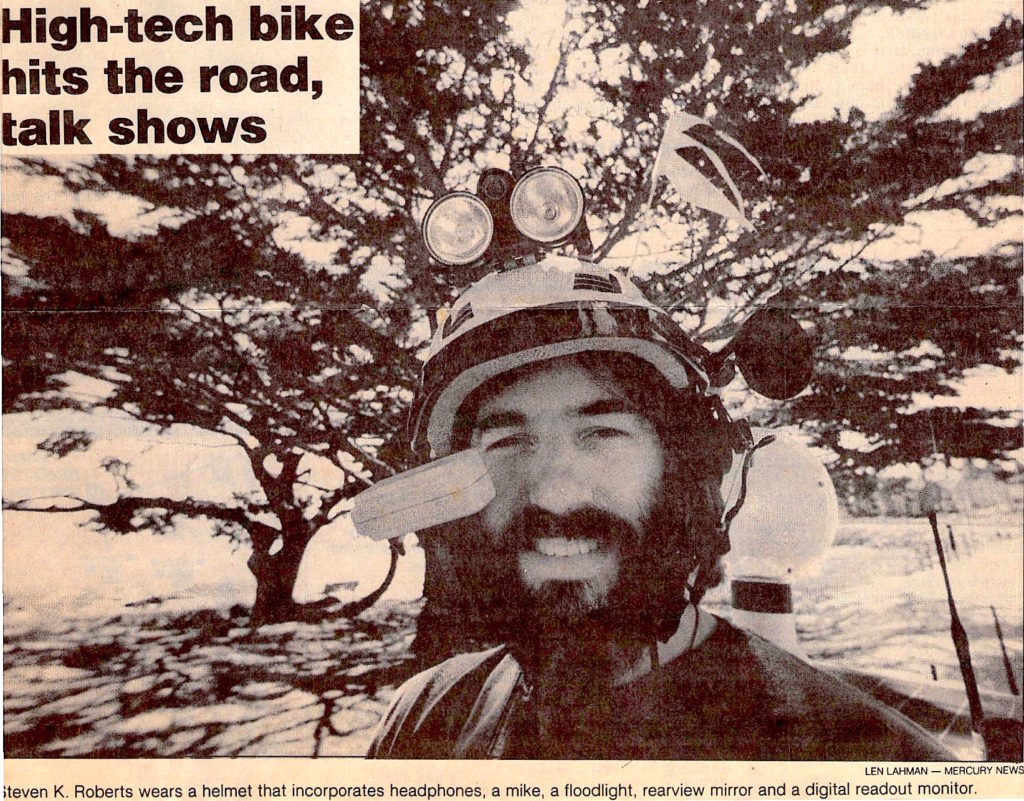 At the cusp between the BEHEMOTH bicycle era and the beginning of the Microship project, this very well-written article appeared in Silicon Valley. I was just winding down a long mothership trek around the US, hauling the bike to speaking gigs and schmoozing for lab space to build the Microship, and the author did an excellent job of capturing the essence of the adventure as well as the implications of the mobile technology.

Cyclist pedals his vision of end to commuting

Some things you should know about Steven K. Roberts:

He calls his bicycle BEHEMOTH, and like other bikes it has a light, a horn and many gears. It also is 13 feet long, weighs 580 pounds fully loaded, carries three computers — a Macintosh and two DOS systems — a cellular phone with modem and fax capability, an answering machine, CD stereo system, a ham radio, solar panels for power, and a satellite receiver that allows him to send and receive electronic mail anywhere and tracks his exact longitude and latitude. It has a security system, which will page him and dial 911 on the cellular if someone tries to move the bike without logging on.

“It can say, ‘Hello. I’m a bicycle. I’m being stolen,’ ” said Roberts, 40, who added that no one has ever tried to steal his BEHEMOTH, a recumbent bicycle, the low-to-the-ground sort that the rider reclines on. “I don’t know what a cop would with that information.”

Roberts’ guiding principle is freedom, not as in freedom of religion or freedom of speech, but as in absolute, what-you-learned-about-in-philosophy-class freedom. He thinks a lot. He’s pedaled more miles than most people drive in a year. He does not live anywhere. He does not work anywhere. He falls in love, via electronic mail. And he sees a world where commuting will be obsolete, a vision for which he deserves some sort of medal.

It is hard to say whether Roberts is a man ahead of his time, or whether his time is ever even coming. But it is also hard to find anyone these days who is living exactly as he or she wants to, and in that regard, Roberts comes mighty close.

He relies on the kindness of strangers — well, not strangers exactly, but people he has encountered on electronic networks — and the benevolence of 150 corporate sponsors who have given him gizmos, work space and ideas that he’s molded into the priceless BEHEMOTH (Big Electronic Human Energized Machine, Only Too Heavy).

Roberts was in Monterey last week to give a speech (MBARI). It’s how he makes his living, along with writing books and articles and occasional high-tech consulting.

He is something of a celebrity in Silicon Valley, where he completed the last year of work on BEHEMOTH in a lab at Sun Microsystems Inc. in Mountain View. He is also a well-known member of the subculture that carries on transcontinental and international conversations and relationships via electronic computer networks. He has even become known among the more pedestrian who have seen his story in the Wall Street Journal, the New York Times, Time, Newsweek and, of course, People; or heard it on National Public Radio, CBS and, of course, “Donahue.”

There is no question he knows people, or knows of them. From his electronic encounters, Roberts has built a Couch Circuit Management System that contains the names of 4,500 people who have offered a place to stay or other help. So, if he’s in Toledo or Tucumcari, Tallahassee or Tulsa, he simply calls up a local map grid, finds the icon that indicates a willing host, clicks on it, and up comes the file detailing just what was offered when.

It has worked for 17,000 miles since 1983 when he chucked his house, his job designing industrial control systems and his life in the suburbs of Columbus, Ohio, and hit the road in search of fun and to prove a point. “It should be possible to be where you want to be,” said Roberts, who writes while he pedals, with the aid of a series of shorthand keys on his handlebars, a head mouse, and a small eye-level screen he can watch out of one eye. “An awful lot of people who are sitting in single-occupancy vehicles are just driving to work to sit at a computer, which doesn’t make much sense.”

Maybe not. But it would seem Roberts’ life isn’t for everyone. People who are uncomfortable staying with strangers, for instance, or those who like neat schedules or people who need people, for that matter. But what do I know? Roberts said he’s never lonely.

“No, it’s wonderful living on the net,” he said with genuine enthusiasm. “I have a very strong community there. What it feels like is wandering around my neighborhood and dropping in on my friends.”

He said he’s even fallen in love with the woman next door, electronically speaking. “You just get to know somebody so well,” he said. “What you end up doing is having a rendezvous somewhere.”

Interesting. Do tell about the time that happened.

Roberts said he can’t imagine a world without electronic mail anymore than he can imagine returning to his life in Ohio. But he is making some concessions.

He hasn’t been on a long ride with BEHEMOTH in nearly two years. Instead, he’s hauling the bike around in a trailer pulled by a pickup, making speeches and appearing at bicycle shows and technology expositions. In fact, his life with the BEHEMOTH is coming to an end.

“I’ve gotten burned out on asphalt,” he said. “After 17,000 miles, the road is no longer interesting. I’m tired of being in a noisy, dirty environment.”

Which is why he is building a high-tech kayak.

The author of this story, Mike Cassidy, left the SJ Mercury News in 2014.