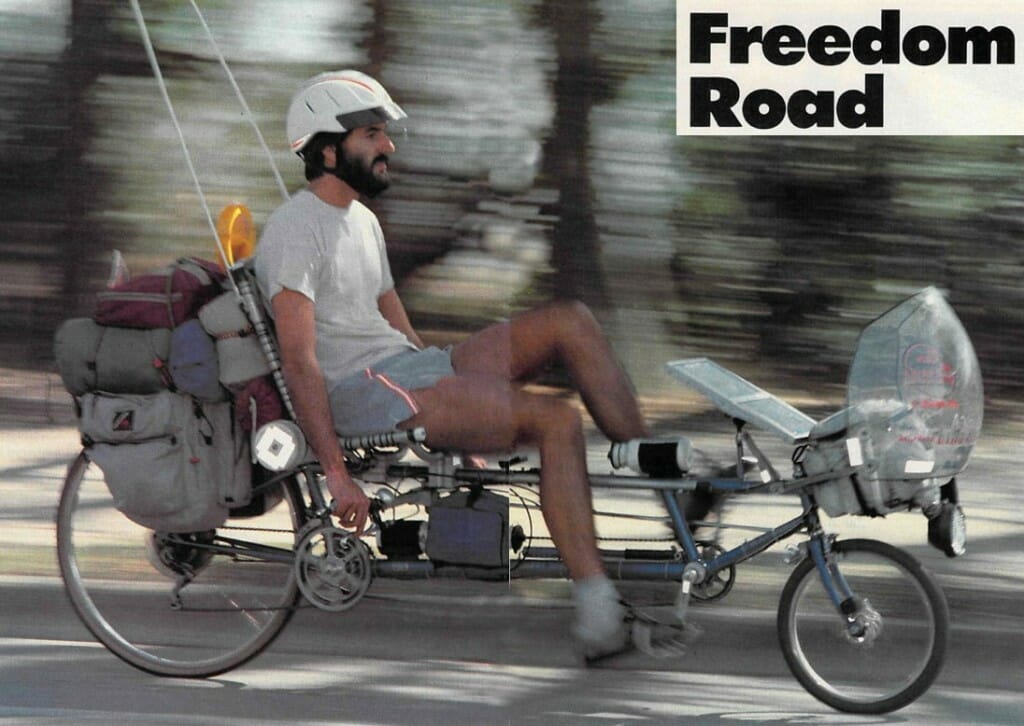 The author of this story, Carole Gerber, also wrote the first article about my adventures… breaking the story in an Online Today piece called “Computing Across America.” A few thousand miles down the road, she got in touch again via CompuServe. Family Computing evolved over the years from this platform-agnostic publication featuring games and learning, eventually morphing into Home Office Computing. The photograph was by Katherine Peden, whom I met in Clearwater after sailing from Key West on the Awesome. It shows the Winnebiko in its early form, circa January 1984, about 3,300 miles along. 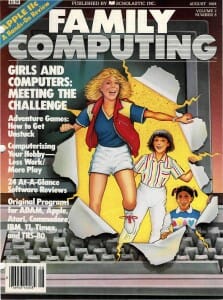 I’m writing this at the Hostel in the Woods of Brunswick, Georgia. I’m sitting by a lake in the late November sun; the word processor on my lap is plugged into a solar power system.

That, perhaps, is an indication of the kind of technology that accompanies me on this 16,000-mile journey. My three-bedroom ranch in suburban Columbus. Ohio, is gone— replaced by a 135-pound package that I have fondly dubbed the ‘Winnebiko.’ It is a home, office, and human-powered recreational vehicle.

This is a segment of the on-line account of freelance writer Steven K. Roberts’ planned 16,000-to-20,000-mile high-tech bicycle trip that will take him on a clockwise loop around America. Several months and some 5,000 miles after this entry in his electronic diary, Roberts’ affection for his decidedly peculiar-looking method of transportation remains undimmed. “The Winnebiko isn’t a trade-show exhibit or a celebration of future technology,” he says. “It’s a functional office on a bicycle, and it works.”

Two computers—one on the bike that monitors time, speed, and distance via liquid crystal readouts, and a Radio Shack Model 100—are part of his mobile office. So are two solar panels, which Roberts mounted on the sides of the bike. The solar panels capture sunlight to power the 12-volt battery that operates the Model 100, as well as the bike’s lights, security system, and radio gear. The battery is housed in an aluminum box along with a CB radio, a circuit to control the battery’s charge, and the vibration-sensitive security system that triggers Roberts’ pocket beeper if anyone tries to make off with the Winnebiko.

More than a Vacation

Roberts uses a modem to “upload,” or send over phone wires, what he writes at night on his Model 100 to CompuServe’s mainframe computer. His manager, Kacy Branstetter, then “downloads,” or receives, the files to her computer with the same numbers and passwords Roberts has used to store the information on CompuServe. In effect, he’s given her a key, via a password, to his otherwise locked files. Roberts sends all letters, articles, and book chapters via CompuServe, so Kacy can call them up to her computer screen to edit and mail at her leisure.

Roberts also uses CompuServe to chat with some of its 100,000 subscribers, to leave electronic-mail messages, and to file regular online accounts of his travels, which can be read by typing GO CAA (for “Computing Across America”) at the appropriate CompuServe prompt. He also maintains a “hospitality file.” where on-line friends can leave invitations for him to visit. So far, about 400 people have offered him a place to stay, and he’s taken many of them up on it.

By spring, Roberts had pedaled (at a rate of about 70 miles a day) and word processed his way through placid country towns and bustling cities in Ohio, Indiana, Kentucky, North Carolina, Virginia, Georgia, Florida, Alabama, and Mississippi. Keeping to the backroads, and occasionally canal towpaths, Roberts sees a countryside that most travelers miss. The scenery, he reports, is gorgeous. From the seat of a bike he savors sights that, viewed from car windows, would pass as blurred images.

It’s the people, though, who keep him from becoming lonely on his solitary journey. “Daily encounters range from the bizarre to the sublime,” he chuckles. In addition to on-line friends he finally meets in person, Roberts has met scores of college students, senior citizens, farmers, tourists, a tattoo artist, and a prison work crew. Aside from nights spent in his tent, Roberts has stayed in homes, hostels, boats, dormitories, a school for delinquent boys, and an occasional hotel. He has cooked over campfires, been invited to dinner by curious strangers, and—ever mindful of expenses—eaten at dozens and dozens of greasy spoons. Adventure, he says, awaits him at every turn.

Most people Roberts encounters are friendly. From a group of Indiana University coeds came the yell, “Look at that awesome bike!” Many people are flabbergasted. “Is this a solar heater or some kind of tool kit?” asked a science teacher in Miami as she checked out the Winnebiko’s paraphernalia. Some people are hostile. An unfriendly hotel clerk in Florida, nervously eyeing the empty parking lot, told him all rooms were booked. “You gotta be out of your mind,” yelled a driver in Martinsville, Indiana. And more than a couple of spectators are sure they have it all figured out. “You’re with NASA, aren’t you?” yelled an Indiana farmer as his pickup rattled by.

Roberts’ journey isn’t all fun, of course. Pumping a bike all day—even one as well-designed as his custom-built recumbent model— is hard work. Early on, Roberts discovered a bad knee that clicks with every stroke of his leg. Still, despite headwinds and tailwinds, rainstorms, and being nearly run off the road by careless drivers, he says he is enjoying the trip immensely.

Although he had originally planned to loop the country in one year, a much-needed rest of several weeks in the Florida sun slowed Roberts’ progress. “It really doesn’t matter how long it takes, because I don’t want to reduce this experience to a series of stops along the way.” he says. “Instead, I want to savor it all. The real point of this trip is the freedom technology has granted me to break away from my desk and make my home on the road.”

Parts of this article are based on an online interview, conducted over CompuServe’s network, between Carole Houze Gerber in Columbus. Ohio, and Steve Roberts in Gainesville, Florida.