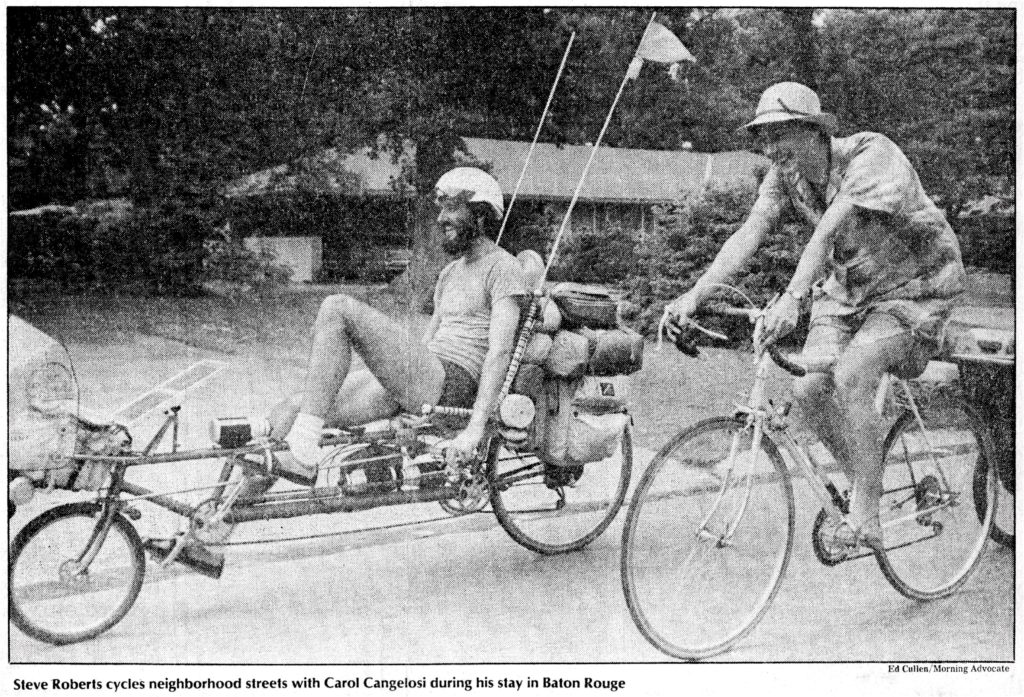 I have always loved this article in the media binder… mostly because of that delightful photo above (or larger below). I was staying in the home of a Baton Rouge mayoral candidate, and one day I went for a ride with his wife and kids (in the trailer just out of frame). I find the image absolutely endearing (and the article below is excellent, more substantial by far than most that were written during this phase of the journey).

Steve Roberts remembers sitting on the sidewalk “unloading” his computer into the only public telephone in Christiansburg, Ohio.

A farmer walked up, eyed Roberts’ hookup and asked, “You from NASA?”

“That sort of set the tone for the trip,” the 31-year-old Roberts said. “I’m an agent of future shock.”

Roberts left Columbus, Ohio, in the fall of last year. Most of what he owned was strapped to a bicycle. A short-lived marriage had ended three years before, and Roberts was making a living as a freelance writer. He sold his house, paid his debts and embarked on a journey he told himself would end when it ended.

“I told myself, ‘I’m a freelance writer, but I’m not going anywhere.’ It was really hand to mouth. I felt absolutely trapped. One grim, gray, typical Columbus day, I said, ‘I’m not going to spend another winter in Columbus.'”

Roberts, who dropped out of college in his freshman year, is a self-taught computer software designer. Much of Roberts’ freelance writing is on computers. As computer hardware became more compact and personal computer networks grew, it occurred to Roberts he could make his living on the road as easily as he could behind a desk.

Roberts would show home computer users and businessmen he could pack an office on a bicycle. He had ideas for two books and a market in computer magazines and bicycle magazines for stories about life on the road.

Roberts designed the bicycle he rides. The 6’4″ Roberts pedals the bicycle in a reclining position, steering and braking with controls under the bicycle’s seat. Fully loaded, the bicycle weighs 160 pounds and is equipped with solar panels that power computer, CB radio, yacht horn and theft alarm. Add to the load a dome tent, sleeping bag, mattress, stove, food, clothing and a flute.

Roberts’ travels are followed by the 100,000 home computer owners who make up a national network called CompuServe. It’s not uncommon for Roberts to check into the network to find offers of lodging and food waiting for him in the next city. Roberts plugs into CompuServe by attaching a cable to telephone jacks or, in the case of public telephones, attaching rubber cups to the telephones’ handsets. A fee is charged for use of the network.

He didn’t set out to be a rolling media event, Roberts said, but it’s working out that way. Roberts guessed he’s been interviewed at least 40 times over the last eight months.

“I didn’t realize how much good it was going to do me,” he said. “It makes it much easier to meet people.”

Roberts hopes the exposure will help attract a publisher for the non-technical book he wants to write. “I hope this will convince them I’m doing their work for them,” Roberts said.

Roberts already has an impressive publications list, mostly technical stories on computers and a college text. Roberts’ next book will probably be one called Breaking the Chains: The Complete Guide to Doing Business Anywhere. Then, he wants to try his hand at a book along the lines of Blue Highways called Computing Across America: A High-Tech Bicycle Odyssey.

Once a day, Roberts checks in with Kacy Branstetter in Roberts’ office in Columbus. For a percentage of Roberts’ income, “Kacy edits, keeps track of the money, creditors, deadlines, printing, keeps up my portfolio, sends me money, keeps up with photographs and artwork. It’s helpful to have a business address.”

If Roberts isn’t completely free of office trappings, he’s free enough to do consulting work from a tent at $50 an hour.

“It’s not my favorite kind of writing, there’s no byline, but when I need money it’s nice to be able to just sit down and start the clock.”

Roberts sometimes works as an “information broker” on the road. Plugging into a telephone’s jack wherever he’s staying, Roberts can do search work (research) for doctors and lawyers by looking through computerized data banks.

“They’re like the world’s largest morgue (newspaper library),” he said.

One of Roberts’ customers was a U.S. importer of kerosene space heaters made in Japan. The importer wanted market information on England and Scotland. Roberts, using his knowledge of data banks, was able to provide the importer with details on supply, demand, available warehousing and weather conditions.

Roberts guessed he’ll be on the road at least another year, maybe two.

“It doesn’t matter. I’ve got no home to return to. When I get sick of being on the road, I’ll stop. Or I’ll find someplace I want to stay.”

Oh, for home computer enthusiasts who haven’t been tracking Roberts’ high-tech travels and want to look him up. His “handle” on the CompuServe network is “Wordy.”