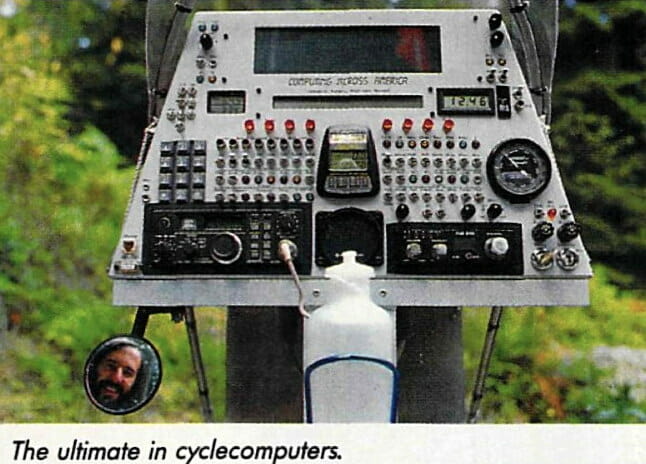 It was fun to see how the “mainstream” cycling community reacted to my machines… for folks cognizant of every ounce, the gizmological excesses of Winnebiko II and BEHEMOTH (which Bicycling covered in more detail 3 years later) must have seemed absurd. The press was generally kind, though; it was good PR for bicycle touring, and certainly pushed a lot of buttons that are fairly universal among those who take off on a tour and just want to keep going and going…

by Nelson Peña
Bicycling Magazine
May, 1988

In 1983, Steve Roberts was working as a freelance writer and computer consultant, living in a 3-bedroom house in Columbus, Ohio. He was 30 years old with a fairly comfortable lifestyle, but he felt there was something missing.

Wanting to combine his passion for travel, communication and gadgetry, he sold his house, paid his debts, and embarked on a chartless journey around the United States aboard a computerized recumbent bicycle.

Since then, he’s covered 12,000 miles. But most impressive is that he’s continued to work while pedaling. Using a coded computer keyboard built into his bike’s handlebar, he’s freelanced numerous articles and even written a book (Computing Across America).

“It’s awfully easy to ride and write at the same time,” says Roberts who sells stories to computer and science magazines, even USA Today. “I’m not looking down at the screen very often. In fact, it’s become quite automatic. It doesn’t slow me down, but I find I don’t do it in traffic or when climbing a big hill.”

Actually, Roberts’s 8-foot, 36-speed recumbent is even more amazing than what he does on it. The custom bike features a ham radio, CB, miniature television, electronic compass, digital short-wave radio, and 2 cassette players (one for music and one for dictation). It also has 5 solar-powered computer systems that not only handle word processing but also a voice synthesized security setup. Whenever anyone gets too close to the unattended bike, it beeps and says, “Please don’t touch me.”

In addition, Roberts can check his mail while en route via the GEnie computer network. (His mailing address is “Wordy,” and he welcomes messages.) He also maintains a hospitality data base of approximately 2,000 people across the country who’ve offered him lodging.

Recently, during a year-long break from his travels, Roberts met a woman named Maggie Victor who, despite having no prior touring experience, has since become his riding companion. “About 3 weeks into our relationship,” he explains, “I said, ‘How would you like to go for a bicycle ride?’ and she said okay. So I said, ‘Fine, quit your job, sell your car, trash your lifestyle, buy a recumbent, and let’s get out of here.’ We’ve been riding ever since.”