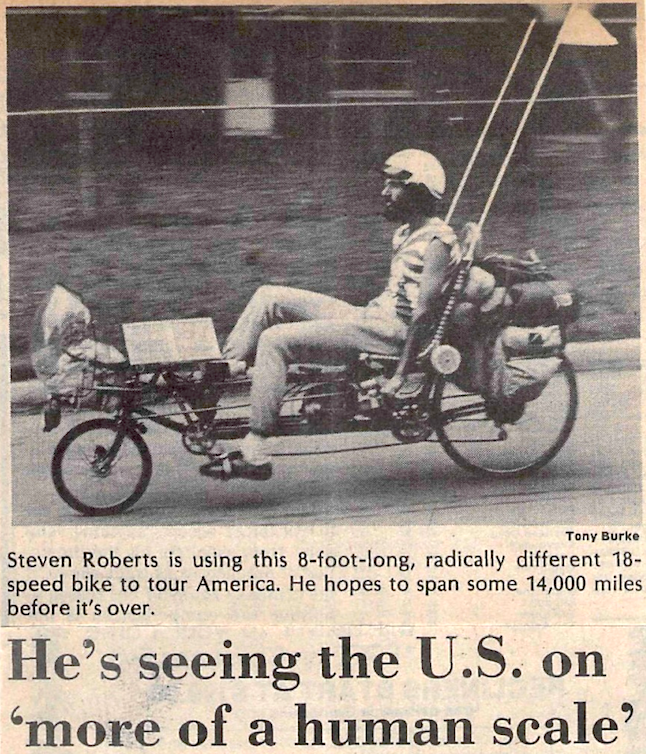 During this first long southbound leg of the journey, enroute to the Keys, I stopped in Gainesville to meet part of my newly discovered biological family (I was adopted, and found my birth parents a year or so earlier). I ended up staying around town for a week or so, then returning a few weeks later after my sojourn to Key West. It’s a long and tangled story of love and loss… better told in the Computing Across America book and its 2014 expanded edition.

Anyway, while in town I did a bit of local media, beginning with this article in the paper. You can also see the full issue in Google’s archives.

When Steven Roberts decided he’d had enough of his “three-bedroom ranch house in suburbia,” he chucked it all for a life on the road. And when the 31-year-old freelance writer wheeled out of Columbus, Ohio, on Sept. 28, he was driving an 8-foot-long, 18-speed, custom-built, recumbent designed bicycle with a few necessities to aid him in his proposed tour along the perimeter of the United States.

Roberts is now in Gainesville, 2,400 miles into a trip he estimates will eventually cover 14,000 miles — “give or take 5,000 miles,” depending on where he meanders.

“I felt chained to my desk,” Roberts said. “I’ve always wanted to travel. Traveling this way puts the country on more of a human scale. If I took a motorcycle, nobody would talk to me. If I chose a car, I’d just be another one of the crowd.”

So anxious was Roberts to get on with it, he didn’t even wait for the final sale of his house.

“I didn’t have a lot of money saved, so I knew I’d have to work while I was doing this,” he said. To make ends meet, Roberts continues his freelance writing, while he works on a book about his travels.

Roberts began the trip with a 750-mile loop between Columbus and Indianapolis — in time to catch the annual human powered vehicle races in Indiana — but more so to get his legs in shape and work out the mechanical bugs in his machine.

Roberts quickly dropped 10 pounds from his lean, 6-foot-4-inch frame, but eats between 4,000 to 5,000 calories a day to maintain his weight.

To see him on the road, you would know he was riding a bike, but that’s where the similarity ends.

“I’ve seen drivers have some close calls,” he said. “I look pretty bizarre, and they start watching me instead of the road.”

The “bizarre” look stems from the reclining design of the bicycle. It has a standard 27-inch rear drive wheel, 16-inch front wheel on the 8-foot-long frame which gives it the appearance of being sleek and closer to the ground than other bicycles. The pedals are in front of — rather than below — the rider. “This gives the rider more drive power because he can use his back to push against the seat. With ordinary bicycles, your power is limited by gravity,” he explained.

The machine’s steering is also radically different from anything commonly seen on Gainesville’s bikeways. The handlebars, gear selectors and brake controls are below the seat, something Roberts says is far more comfortable than conventional steering because the arms stay below the heart. “That also alleviates the numbness in the hands caused by pressure on the ulna nerves.” With the canvas chair seat, Roberts escapes the backache common to riders with conventional bicycle seats.

The machine owes its design and concept to Roberts. Franklin Frames of Columbus, built it out of standard chrome alloy tubing. Fully, loaded, it weighs 135 pounds. The cost: a mere $5,000.

Some of the extras include solar panels which recharge the nickle-cadmium battery that powers the bike’s lights, emergency citizens band radio, security alarm and his portable word processor computer. Also included are a small windshield/fairing, an odometer, a speedometer and some tools.

“I had it up to 44 miles per hour going down a mountain,” he said, adding that he went up the same mountain at about 2 mph. “I average 70 to 80 miles a day, and I stop for a week somewhere at least once a month.”

Finding shelter has been no problem for Roberts. “Sometimes I stay at a hostel or campground. In college towns it’s not too hard to meet people who give me places to stay.” Roberts was looking for some bike parts in Pedalers, a local bike shop, when owner Mike Cochrane offered him a place.

“Every few days, I’m involved in somebody else’s life,” he said.

“I was nervous about going through certain areas, but I haven’t experienced problems with anybody,” he said. “The people have shown a nice ambiance wherever I’ve gone.”

Roberts makes other stayover arrangements by contacting people in destinations ahead of him via his computer and the CompuServe network.

CompuServe, he explained, is a network of home computer owners who pay a user fee to get into a nationwide computer-communication system. Roberts calls it his link to the rest of mankind, and he uses it for everything from his work to his play.

“I have an agent in Columbus,” he says. I can type something up on the word processor, patch into the CompuServe system on the phone and send stories, send and receive messages, or hold actual conversations.

“I’m getting more done out here than I was back in my office, if you can believe that. There’s fewer distractions.” Roberts writes monthly articles for a computer-oriented magazine, and does pieces for several other technical magazines, including Mechanix Illustrated, Popular Science and Technology Review.

He is also the author of three books, a fact made more meaningful considering that Roberts dropped out of college after two quarters and never went back.

His lack of a degree has been no stumbling block to Roberts. “I feel that engineering schools do more harm than good, especially for creative people like myself,” he said. “If you have a passion for something, you can learn it quite effectively.”

At the age of 21, when Roberts found he couldn’t get a job in engineering without the degree, he formed his own company, “Cybertronics.”

“I sold computers and related stuff back before everyone was into it.” He describes his company as a “moderately successful” business.

He opted to become a writer in 1979 because it’s something he has always done well.

“Writing is a license to become a generalist,” he said. “It’s the perfect career for someone who can’t decide what to focus on. My product is my advertising. I like it from a personal and a business standpoint.”

Besides seeing America’s scenery the way that few people ever get to see it, Roberts becomes part of the environment he passes through. Those tales will eventually become part of his book, Computing Across America.

Roberts told how he happened upon a truck wreck in Maryland and discovered he was among a group of work release prisoners sent to assist in the salvage and cleanup.

“They wondered what my bicycle was, asked if I had a gun, and after I explained my story to them they led me down to where they had stashed some of the cargo. They lifted this tarp and there were all these boxes of Sarah Lee pastries. There I was, standing in the woods with all of these convicts, while they debate the relative merits of which particular pastry is best. So they loaded me up with pastries and I went on my way.”

“I try to stay off of main roads, the traffic is scary sometimes, and interstates are totally out of the question.

“I’m in no hurry, this is not a speed trip,” he says. “I can’t say ‘I’ve got to be in San Francisco by such and such a date,’ because then the segments along the way become only a means to that goal. It doesn’t matter when or if I get to a certain place. I have no specific goals as to time or distance. I’m where I’m going right now. These are very loosely defined goals and I don’t measure success by it.”

Roberts plans a similar venture in Europe after the American tour is completed.

“Right before I left, I had some fear of the unknown, the human dangers, but I’ve never even been slightly tempted to turn back. If I abort my trip, I’ll have to find a place to live. I have no hearth to return to. It’s all part of the adventure.”