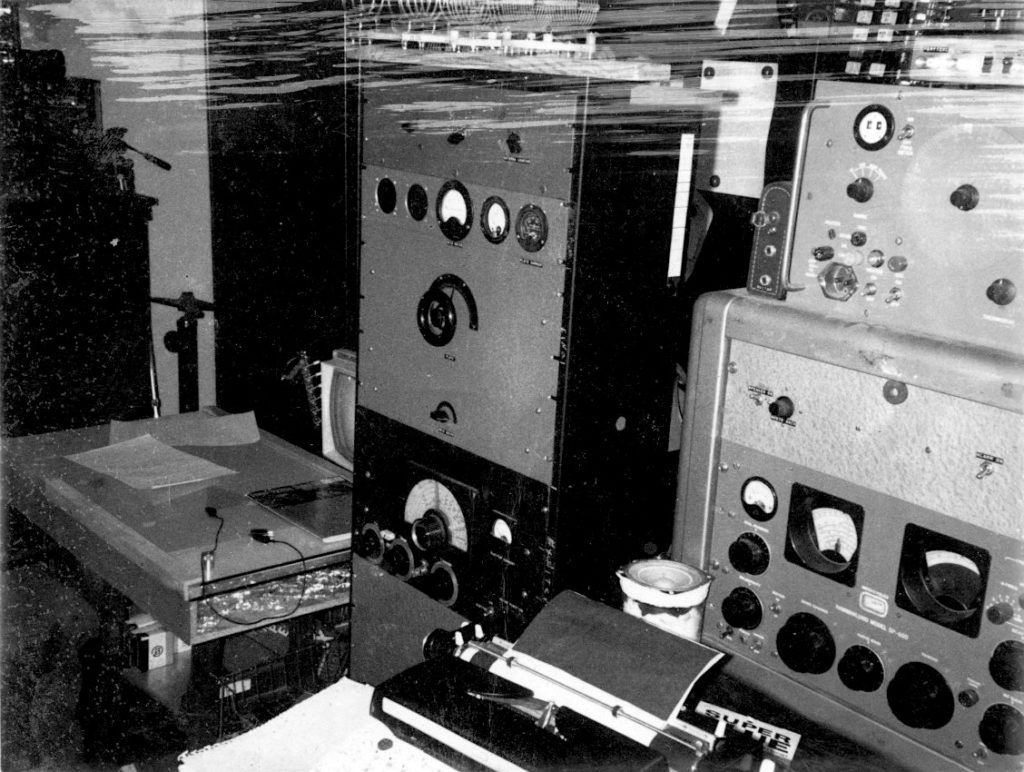 Looking at these ancient photos now, I can see why I often got “written up” after room inspections. My bed, not shown here, was a crawl-in cave behind the workbench, and I had a cat living with me. The tall equipment rack was a homebrew HF transmitter with a pair of Eimac 100TH tubes in push-pull, and you can see my beloved Hammarlund SP-600 shortwave receiver to the right… along with Tektronix 531 scope, other test equipment, reel-to-reel tape deck, my shiny new $395 HP-35 calculator, and a typewriter that caused way more trouble than all the rest put together. There is also a homemade light table for doing Bishop Graphics printed circuit board artwork… I was designing a “scan synthesizer” to generate arbitrary waveforms, along with other projects. The tool board kept bench clutter under control, and over on the far wall in front of the small-parts cabinets are a Spectra-Physics 155 HeNe laser and a Hagstrom electric guitar.

Good times, sorta… I was 19, full of crazy ambitions, and not exactly fitting in as an enlisted airman (my job was flight-line maintenance on F-111 avionics systems, then later test equipment repair in the Precision Measurement Equipment Lab). I was always getting nastygrams to clean up this mess, for some reason.

Here was the bench in July, 1972 – the black-and-white photos are from a few months later:

The posting date is approximate, but this was late 1972. Click the photo below to embiggen and poke around…

When I bought that 6-foot cabinet from a surplus place in Boise, I dragged it back to the dorm room and then painted it black before building in the big ham radio transmitter. It later became the enclosure for my homebrew 8008 system, following me around until I found a gorgeous sloping-panel home for my rack equipment. Here I was perched atop it, for some reason, contemplating the absurdity of my existence in early 1972:

A year earlier, in late 1971, I was at Keesler AFB in Biloxi, going to tech school, about 7 months between Basic and my posting in Idaho pictured above. The photo below was my dorm room there, again featuring the wonderful Hammarlund SP-600 that I still miss nearly a half-century later: