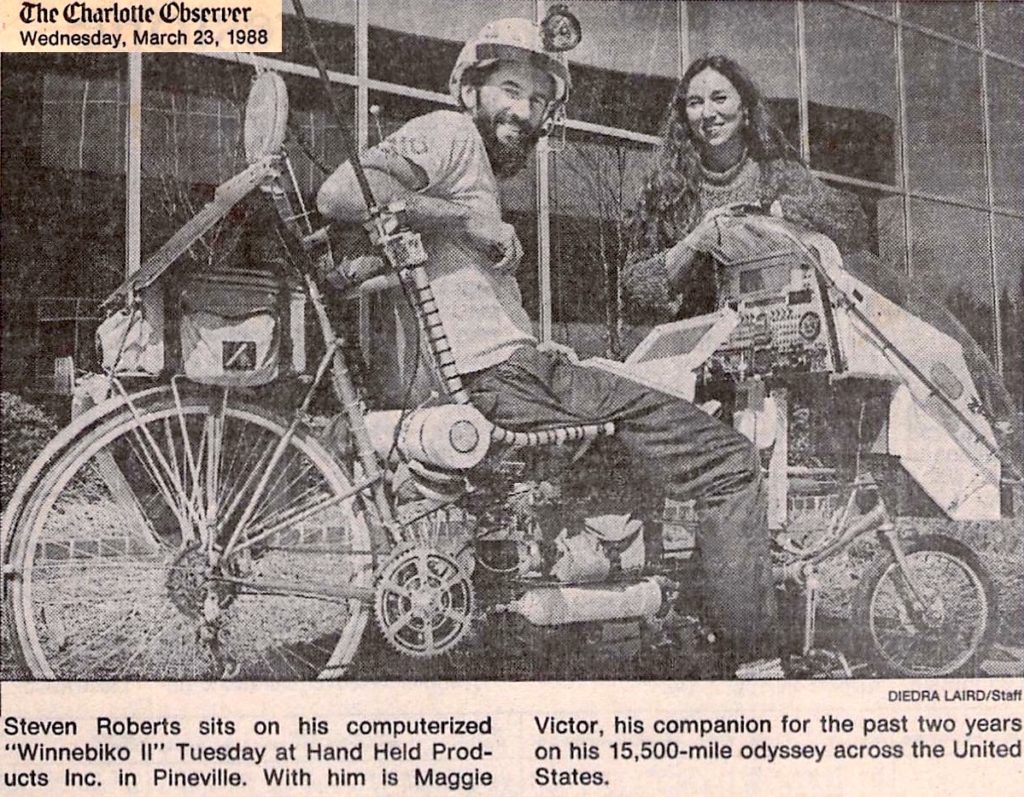 This visit to Hand Held Products was the beginning of a consulting relationship that segued into an interesting friendship. It was one of the rare instances of “technology transfer” from the bike project (packet radio), and it was fun to make a small contribution to new product development. I had a piece in the same paper 3.5 years earlier.

Roberts’s 275-pound “electronic cottage” has two wheels. That’s where the similarity with an average bicycle ends.

The keyboard for Roberts’s computers are located in the bike’s handlebars, enabling him to write and bike at the same time. But the keyboard doesn’t have letters. Rather, Roberts has memorized a computer language that converts characters into a code which the computer understands.

“It’s nice to discuss the bike with people who understand its technical aspects,” Roberts says. “Ninety percent of the questions I usually get show a level one understanding.”

The bike and the road have been Roberts’s home and office since 1983, when he asked himself, “Why am I stuck in Columbus, Ohio?” Until then, he earned a living by mixing freelance writing with computer consulting.

His 15,500-mile odyssey is in its fifth year with no end in sight, says Maggie Victor, Roberts’s companion for the past two years.

“We are able to take our business and home with us wherever we are,” says Victor.

To pay expenses, Roberts sells his book, Computing Across America, and a bimonthly journal, The Journal of High Treknowledgy. He stays in touch with other computer users through the GEnie computer network and does some consulting.

To maintain editorial integrity, Roberts refuses corporate sponsorships, including Philip Morris Inc., which wanted Roberts to bike around South America. Roberts says his strong antismoking views nixed that idea. [Note: I accepted in-kind sponsorships of products and the like, just not cash.]

About 60 computer-related companies have given Roberts equipment to use on the bike, which he continually updates to add capabilities.

“I have a bad habit of turning hobbies into businesses and ruining the hobbies,” he says. “I’m trying to keep this as pure as possible,” he says.

Roberts will display his bike at Horizon Books at Carmel Commons Shopping Center from 1 p.m. to 4 p.m. Saturday.