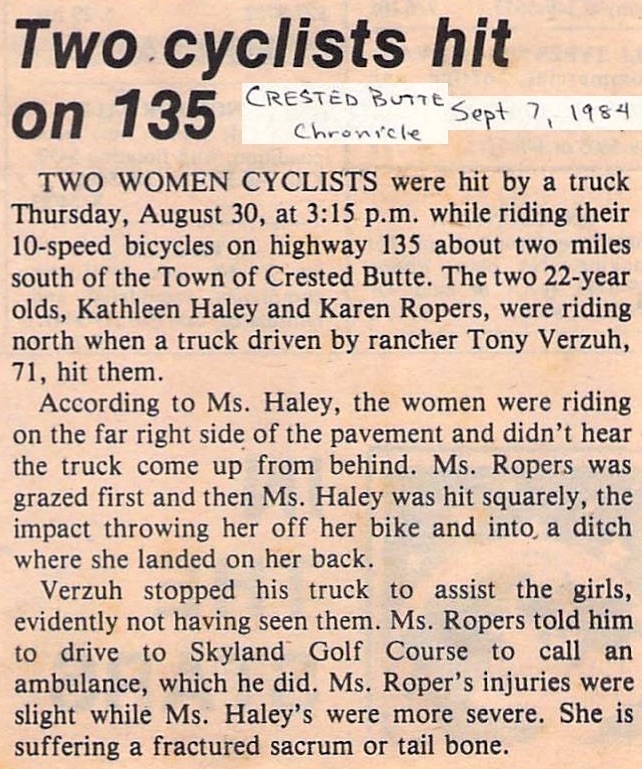 Crested Butte is so safe that we have to find ways to put our lives in peril in order to make them worth living.

Gunnison, Colorado. Through one of those successions of chance encounters that characterizes the couch circuit, I ended up at a party with three beautiful 21-year-old students of Western State College. Our host was “Dr. Dan,” a skier and medic with a house in the woods, hot tub, hummingbird feeders, satellite TV, thick glasses, and two chronically adorable kids.

Spaghetti and spirited conversation. Naked lounging in the burbling Jacuzzi under breath and steam floating ghostly in the moonlight. The video — Young Frankenstein; the music — various pops. Tracy slapped a tambourine in time with Pat Benatar while Karen and Kathleen danced in the rustic living room, energetic and alive, generating sharp pangs with every leggy twist.

“Hey, why don’t you blow off work tomorrow and ride to Crested Butte with me?” I asked the ladies, only half-joking. An easy thirty-mile ride lay ahead, a 1,200-foot climb up a long valley to the mountain-bike capital of the world, a place with a reputation cozy and playful, friendly and intelligent. From there I would either wrestle the bike like a madman over one of the brutal jeep trails to Aspen or take the long way around through Carbondale. But sitting there with my eyes on the flawless dancing flesh of my friends, Crested Butte itself was far from my thoughts.

“Oh, that’s a great idea!” Kathleen was enthusiastic, immediately suggesting places to stay and urging Karen to come with us. And by the evening’s end, I had a riding date for the next day.

We set out in the early afternoon, laughing and teasing in the crisp Colorado sunshine. The contrast was eyecatching: the high-tech nomad bristling with esoteric gizmology, the two beautiful un-helmeted women on sleek ten-speeds. We looked like a motorhome flanked by MG Midgets.

North we went with a feeling of holiday, waving at passers-by as if we were pedalers on parade. Well-muscled tan smooth legs. Short loose shorts. Bright young faces. Ahhh…

We cruised through the scenic valley, flirting and joking.

“Hey, are we going to be in your book?” asked Kathleen, the very image of healthy femininity beside me.

“Well, that depends on what happens, honey.” I winked at her in mock lechery.

She groaned. “What, riding up to the Butte with you isn’t enough?”

Karen pulled alongside, hair flying loose in the breeze. ” ‘It depends on what happens’? Is that what he said? What do you suppose he means?”

Kathleen shrugged. “Beats me.” They both grinned mysteriously and sprinted ahead, soon disappearing from view. With their unloaded bikes and cycling-tuned legs they had no trouble leaving me behind.

I crested a hill and saw them rounding a bend far ahead; I rounded the bend and saw them cresting another hill, over a mile away.

Riding with me to Crested Butte, eh? Hmph. I plodded along on my bikeasaurus, running 9 mph into a headwind, growing miffed. The whole point of this affair had been social — the sweet delight of riding beautiful roads with beautiful women, a sweaty precursor to a night so intriguing that I dared not burden it with expectations.

But this was not what I had in mind. At the top of the next hill, I hoped to find them waiting, giggling in the bushes and leaping out to startle me. But there was only the road, a hint of approaching rain, and the slowly nearing Butte.

They were gone. Hmph.

But then I saw a knot of cars, someone directing traffic, a guy running across the street… and then the frail tangle of a spilt bicycle, and then another… and Karen standing hugging herself as if freezing and a man bending over Kathleen.

With a pounding heart I dismounted, fumbled with the kickstand, and stood in emotional shock surveying the scene.

Kathleen lay moaning, crying, terrified. “Don’t let me be paralyzed, please don’t let me be paralyzed… oh God it hurts… will somebody please do something? Oh God… Where are they, why aren’t they here yet?” Her eyes darted about in fear; she lay immobile at an odd angle in the ditch, a single drop of blood standing on her thigh. Her leg was lacerated in a series of shallow painful cuts, but it was the way she was lying that tore into my gut.

Only her eyes and mouth were moving.

I turned to Karen and held her a moment, both of us trembling hard. “A truck,” she began in a high, shaking voice. “He hit me first, I think. She went flying…” She stifled a sob.

We heard sirens and the ambulance arrived, with Kathleen absurdly moaning, “Oh no, I can’t afford an ambulance!” She lay there, a broken flower, pain radiating in palpable waves while I stood guilty and sick.

The old rancher who hit them walked over, a grizzled man of uncertain step, wearing glasses unlike any I’ve ever seen. Thick round convex lenses were set into the middle of standard optics, revealing the absurd truth that this driver on a busy narrow bike route was almost blind. He kept asking irrelevancies, trying to be helpful but only succeeding in angering me. I avoided him.

With Kathleen’s cries in the background, someone said: “Say, that’s quite a rig you got there. What are the solar panels for?”

The rage struck without warning, almost blinding me. The gawker stepped back in sudden fright — I don’t think I hit him, though the urge was strong. “I really don’t feel like answering all the fucking questions right now, if you don’t mind!” (Damned civil of me, under the circumstances.)

Meanwhile, medics were closing a split aluminum stretcher under Kathleen, careful with every move. Her neck was in a cervical collar; an oxygen mask made her cries sound weak and hollow. “Am I paralyzed?” The EMTs were smooth and professional, living as they do in a ski area: on the count of three they lifted her onto the gurney, and then into the ambulance. Karen joined her as I stood helplessly, the bikes at my feet, the cops asking questions.

Then lightning streaked the sky and the rain began, just as the ambulance raced off toward Gunnison with its siren issuing a mournful Doppler wail. I stood listening to thunder and Kathleen’s vital signs coming over the police radio, holding her sunglasses and staring numbly at the Brooks leather saddle: torn, spattered, accusing, a broken remnant of my friend.

I climbed onto my bike and rode the remaining three miles to Crested Butte, my flashers on, daring the goddamn drivers to come too close, angry at them all, almost hoping for an encounter with the rancher. I made a quick pass through town in the gloom, then stopped at Bicycles Etcetera to break the tragic story.

“Well, don’t feel too sorry for him,” someone else noted. “He tried to
shoot down a hot-air balloon last year because it frightened his cows.”

I was still deeply shaken by the accident. “I don’t care if he’s a sweet old man or a certifiable loony. The guy can’t see — his skid marks began
almost a hundred feet after the point of impact! What’s someone like that doing with a driver’s license?”

The lady shook her head. “They’ll probably take it away from him. I don’t know what he’ll do — he lives alone.”

“That’s like taking away someone’s masculinity,” He gazed sadly out at the rain. “Poor Kathleen. You know, we really need to start pushing for that bike path again.”

“You need one. I’ve been riding all over the country, and I’ve never been on a road with as many cyclists. And it’s narrow, busy, and traveled by at least one blind old geezer with slow reflexes.”

“I’m sure Kathleen will be glad to hear that.”

It was in this dark mood that I set out to explore Crested Butte. Thanks
to the rancher, my place to stay was void, and I felt like an outsider, a bearer of bad news, an unwelcome vagrant somehow responsible for the whole problem. I half-heartedly did the show-and-tell a few times, then settled in.

At last they let me talk to her. I stood at the pay phone, biting my lip between words, almost afraid to ask.

“Kathleen? How are you?”

The voice was weak, dulled by painkillers. “It hurts. I broke my sacrum.”

I breathed a long sigh of relief.

“Karen’s arm is messed up, but she’s OK too. Where are our bikes?”

“At the Mount Crested Butte police station. And I have your sunglasses.”

“Oh. Good…” She seemed to be drifting off.

“You didn’t have to get so damn dramatic about it.”

“Dramatic about what? What are you talking about?”

“I know you wanted to get in the book, but there are easier ways.” She laughed.

I paused for effect. “You made it.”