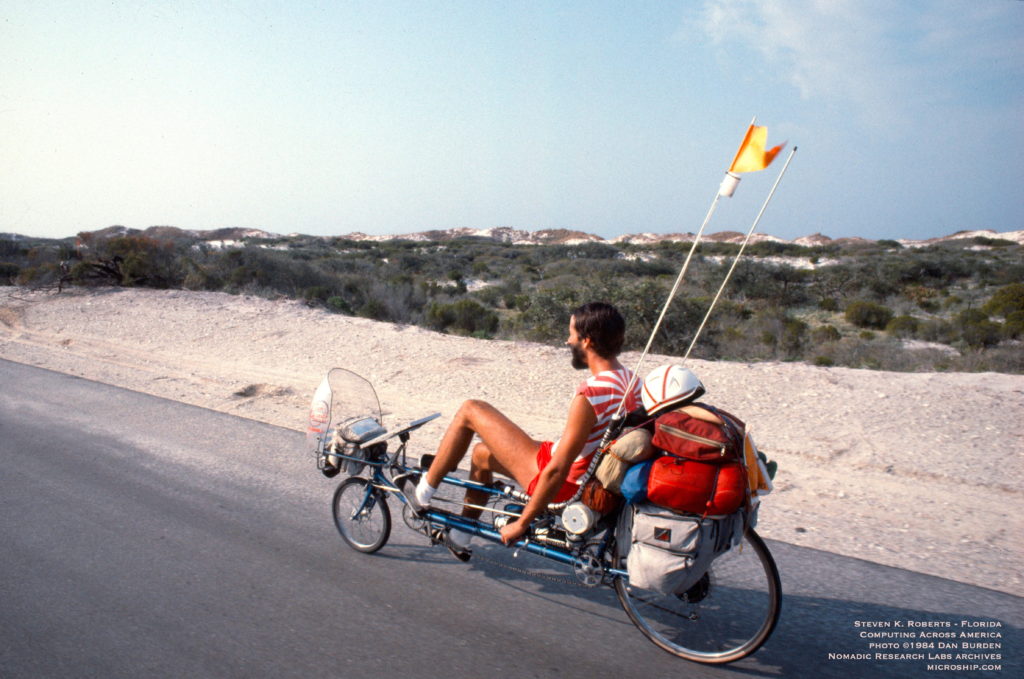 I am looking for a hardcopy of this to scan; in the meantime, I’m taking the liberty of copying the text from the CSM archives. The article really catches the tech details (and feel) of this phase of the adventure, approximately 1 year along. The photo above was not in the piece, and was taken by Dan Burden in Florida a few months earlier.

Space-age nomad:
he hitched up a computer and took to the road

When people like Alvin Toffler began lecturing on the liberating effects of the new information age, Steven K. Roberts listened. For three years this lanky, dark-haired, gregarious computer writer from Columbus, Ohio, dreamed of cutting the chains from his desk and striking out across country.

A year ago his dream became a reality. Last September, Mr. Roberts hit the road on a custom-built recumbent bicycle (dubbed ”Winnebiko”) loaded down with a potpourri of solar-powered electronic gadgetry, in addition to the basic necessities. It is a journey he expects to last two years and take him through most parts of the United States.

What makes Mr. Roberts’s cross-country odyssey different from other bicycle treks is that he is working full time as he goes, using the latest in computer technology. As he travels America’s roads reclined on his unusual vehicle, he turns out a steady stream of articles for computer and bicycle magazines. And he recently signed a contract to write a book on his experiences, to be titled ”Computing Across America.”

His ”word processor” is a tiny, four-pound, battery-powered computer. He has worked in his tent at campgrounds, in country diners, in the homes of friends made along the way, and even on the deck of a sailing yacht during a ride in Florida.

The computer, in conjunction with the telephone and CompuServe, a national computer network, allows him to keep in touch. Hooking it into the nearest telephone, Roberts can exchange electronic mail and send his prose back to his ”base station” in Ohio, where it is edited, printed, and submitted to publishers. With the computer, he can also access a large amount of information, including news and reference material, and maintain his own electronic ”filing cabinets,” areas on the system where he can store large amounts of information.

CompuServe is more than just a source of communication, however. It is also one of Roberts’s publishers. A diary of his experiences is available to CompuServe subscribers, and he writes a column for the system’s monthly magazine. In addition, its users form a built-in network of friends who can provide hospitality for the wandering writer. People from all parts of the country who follow his exploits on CompuServe have invited him to stop by when he pedals into their vicinity.

In one of these on-line articles, Roberts tries to explain the purpose behind his journey: ”For years, we’ve all been hearing about the information society — computers in every home, the world wired with data communications networks, information on any subject only a few keystrokes away. This is exciting, of course, but those long-promised liberating effects of the technology have been long in coming. … ‘Freeing our minds for loftier pursuits,’ indeed. Most people who work with computers find them every bit as restrictive and demanding as traditional assembly lines.”

He did determine, however, that the technology had advanced to the point where it could free at least some people (for instance, writers) from the constraints of geography, and he decided to prove it.

So far, things have gone better than Roberts dreamed possible. In an interview via CompuServe, Roberts reports that he can’t think of any major drawbacks to his current life style (although he does admit his parents worry that he is suffering from prolonged adolescence).

Generally, the self-styled ”high-tech nomad” bicycles a week or so at a time, laying over in various places ”as whim and relationships dictate.” He abides by no timetable or schedule, with the sole exception of his writing deadlines. Despite the inconveniences and added logistical problems, he says his productivity is higher than when he was working out of a suburban ranch house in Ohio. ”More material, less sense of stagnation and futility, more positively reinforcing emotional feedback, more ego gratification, more fun in the process of writing itself,” he types on the screen.

Much of his new material has come from the encounters along the way. ”I meet more people in an average month now than I did in four years in central Ohio.” The novelty of his enterprise has attracted the attention of local news media in many of the cities where he has stopped; that helped open a number of doors and made it easy to meet people.

One of his more unusual vignettes has a West Virginia setting – the site of a roadside wreck. When he stopped, five burly prison inmates assigned to clean up the debris surrounded him. He was alarmed at first, but soon found they were just curious about his strange bicycle. After he explained its workings, the cleanup crew treated him to some of the pastries it had carefully scavenged from one of the wrecked vans.

Although Roberts’s life on the road is very unstructured, it took a lot of preparing and organizing to make his new way of life possible. His bicycle was custom made. He had to design solar panels for electric power. (Actually, the computer does not use much power, compared with his other gadgets, which include bicycle lights, security system, CB radio, and a Walkman stereo tape player.)

Most important, he had to organize his affairs in such a way that he was free to wander. This meant finding someone to operate his base station back in Ohio. ”This was very hard. I had sought such people before and had been disillusioned. But I got lucky,” he says.

Kacy Branstetter is Roberts’s computer-literate secretary. In return for a percentage of his income, Mrs. Branstetter edits his articles and sends them to publishers. She relays phone messages and inquiries. She forwards mail and wires money to him when necessary. He mails her receipts, old maps, and other material that must be saved. All told, she puts in 10 to 15 hours of work per week, but when work begins on the book, she expects this to increase. Without her backup, Roberts’s wandering work life would clearly be impossible.

”I’m not out there traveling around, but this arrangement – being able to work at home and set my own hours – means real freedom for me,” explains Mrs. Branstetter, the mother of a 1-1/2-year-old toddler. ”And I feel a part of the exciting things Steve is doing.” Her biggest problem has been getting the wandering writer to knuckle down to work when a deadline approaches: ”It’s hard because he’s having so much fun.”

At this writing, Roberts has made his way from Ohio to Florida, and from Florida to Texas. By summer’s end he plans to have ridden northward into the Rocky Mountains, up into Canada, across to the West Coast, and down into California. Originally, he had planned to take a year and cover 12,000 to 14,000 miles. But this schedule has lengthened to two years and 20,000 miles. And he has begun talking about computing across Europe after that.