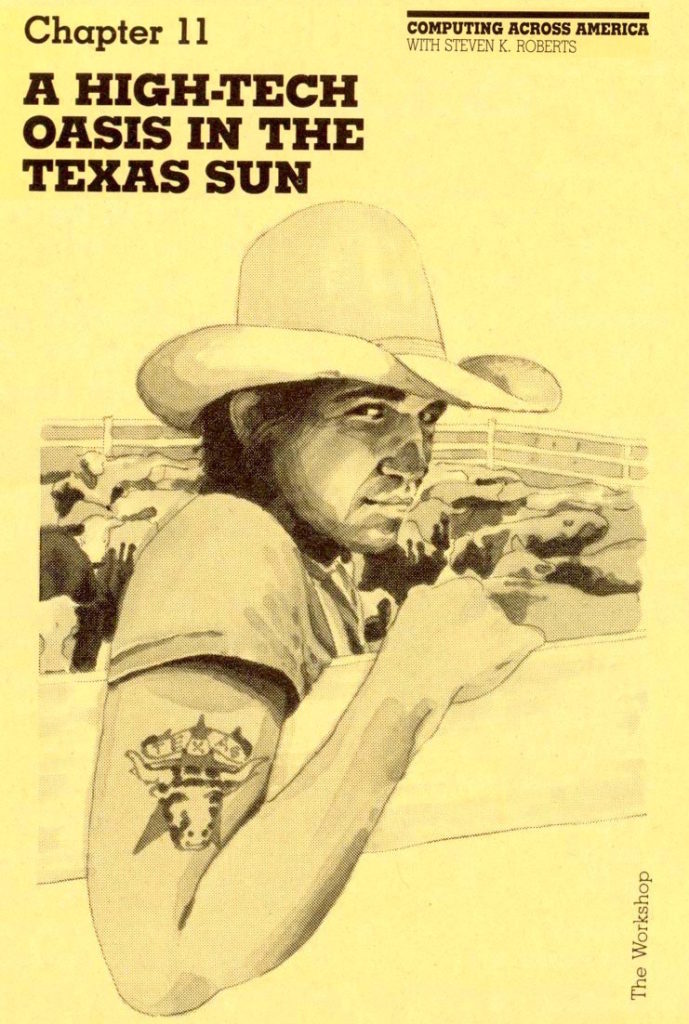 I was unexpectedly enchanted by Austin, during that long pedal across Texas… and this post in my CompuServe series became fleshed out into a substantial chapter in Computing Across America, with lots of detail about the co-op culture, remarkable people, and the nature of community. This much shorter piece covers the BBS scene as revealed by a party in Zilker Park.

Embarking on this adventure from the Midwest, I was amply provided with warnings from well-meaning friends about the savage and desolate lands that lay ahead:

“Texas? You’re going to ride a bicycle through Texas? You’re crazy, man. They’ll eat you alive down there, if you don’t die of thirst first.”

Well, I’m happy to report that none of the cultural stereotypes I’ve heard so far are worth a damn, and those about Texas are no exception. One of the great travel skills is learning to ignore about 75 percent of the advice that people offer. The real trick, of course, is knowing which 75 percent.

In the case of Texas, all I knew for certain was that it would be big and hot. Other than that, I had only a highly varied collection of comments:

“Stay away from Houston if you value your life. It’s a zoo.”

“Go to Houston for sure, man. You can find it in any flavor in Houston.”

“Wear lots of sunscreen or you’ll have skin cancer before you hit New Mexico.”

“You’re heading to West Texas? You’re crazy. It’s uphill all the way. Oh, you may go downhill sometimes, but even when you do, you’re gaining elevation.”

“Hey, you’re going through Texas? All right! They got the friendliest people in the world!”

The only conclusion I could draw from all this was that Texas must be a highly diverse place, triggering a wide range of emotions in people. And after about six weeks here, I can confirm this.

One of the most dramatic extremes in this 262,000-square-mile state is Austin. It is a city of cutting-edge technology and new-age consciousness. A city of co-ops and urban sprawl. Of nude beaches and evangelism, energetic musicians and lesbian separatists, nerds, “drag worms,” wizards, sailboarders, politicians, cyclists and a vast population of networkers.

Austin is a third the size of nearby San Antonio, yet it has 22 busy bulletin-board systems compared to the latter’s quiet eight. I suppose there is some kind of social indicator in this, the network age, and I had the opportunity to observe the Austin BBS scene close-up — at a keg party in Zilker park.

“What board do you hang out on?” someone asked, and then noticed that the Model 100 on the picnic table was plugged into a blue recumbent bicycle with solar panels. “Ohhh, you’re the biker!” he cried. “I’ve been reading about you on CompuServe.”

Someone else drifted over, sparking a conversation about CompuServe’s Consumer Information Service versus the boards. “They’re hardly comparable,” I observed. “I haven’t seen a BBS yet that can offer 130,000 subscribers, nodes all over the country and real-time conferencing. Aren’t the boards a bit dull by comparison?”

I was shot withering stares by more than one sysop. “Boards are free, man.”

“Yeah, but there’s nobody to talk to on a BBS,” I replied. “Unlike the CB Simulator —”

Another board owner joined in. “Personally, I get a little tired of answering CHAT requests. That’s why I brought up ELIZA.”

He twinkled with wry humor. “You got it. It’s the perfect Turing test. I have a second computer hooked up to my board system. When someone issues a CHAT request, it says, ‘Hello? Can I help you?’ I changed all the messages so it emulates a sysop instead of a psychiatrist. Some people never do catch on.”

More people arrived, and the beer flowed. The BBS world is a high-tech caricature of the community of which it is a part: most segments of Austin’s unusual culture were represented, each with its own board. There are systems for hackers, gays, punks, tinkerers, users of specific computers, lonely hearts, aficionados of locker-room humor, and those who just need a BBS to call on those long boring evenings with the computer.

One of Austin’s board systems led to an interesting lunch meeting on my last day in town. Joe Ely, burgeoning rock star, fired up a system called “Campfire Nightmares.” Sort of a two-way fanzine of the information age, this BBS offers gig dates, reports from the band’s tours and, naturally, bits of whimsy, including “The Bathroom Wall” and lists of song titles that will, it can be hoped, never be.

Joe also put a computer to use during album production — writing and editing the music, and doing the jacket graphics. The result, “Hi-Res,” is a high-energy mix of Texas rock and the latest in album production techniques. “Usually you gotta sit down with the band and an electric fan,” he observed.

If there is any point to all this, it is that Texas has progressed right along with the rest of the country, a fact that seems to elude most of us northern folk. Old stereotypes die hard.

Of course, Austin is a special case — a place that one resident has dubbed “Austinfornia.” But it shows how inaccurate decades-old images of this land can be. It was with a heavy heart that I finally tore myself away from the AUS node and pedaled toward the hills and the dust, the mesas and the mountains.

Editor’s note: Steve Roberts, Online Today’s nomadic journalist, is currently traveling around the United States on a recumbent bicycle. He uses a Model 100 for both writing and communications. During this trip, which is expected to cover 20,000 miles, Roberts is writing regular columns for Online Today, as well as a book entitled Computing Across America, which will be published by Simon & Schuster in 1985.