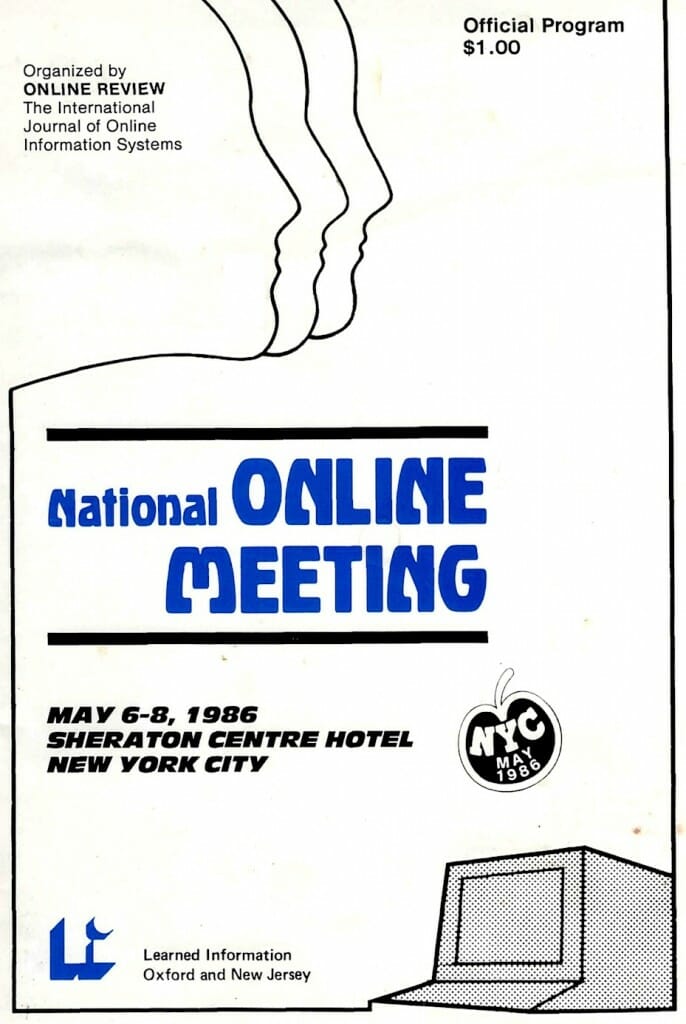 Before taking off on my bicycle in 1983, I had spoken at this conference about the application of personal computers to online information retrieval (Dialog and other systems which, for a dollar or more a minute, would disgorge bibliographic records and other structured forms of data).

In 1986, I returned to New York with Maggie to report on the application of CompuServe to my new technomadic existence… a hint at what ubiquitous computing and connectivity tools might someday bring. (Sitting here three decades later with a smartphone in my pocket, OCR’ing this into WordPress, it’s hard to remember just how radical this idea was back then.)

This took place during the interlude between the Winnebiko and Winnebiko II eras, when I had a flirtation with employment for about 6 months at Discovery Systems (founded by the former president of CompuServe) to develop interactive videodisc software. For more details, a report on this talk appeared in the June issue of Information Today… this is just the summary in the conference program.

Intrigued by the implications of online society? Enchanted by new technology? Feeling restless and chained to your desk? Freelance writer Steve Roberts was all of the above—so in late 1983 he sold his Ohio home and moved to a recumbent bicycle. Carrying computer and communications gear in addition to the traditional camping equipment, he set out on a 9,760-mile tour of America… freelancing electronically all the way. The CompuServe network became home and office; the entire country become his neighborhood.

The 18-month experience yielded a book (Computing Across America—the Bicycle Odyssey of a High-tech Nomad) as well as dozens of magazine articles. Now Steve will be in New York to wind up NOM-86 with a spirited look at life in Dataspace…