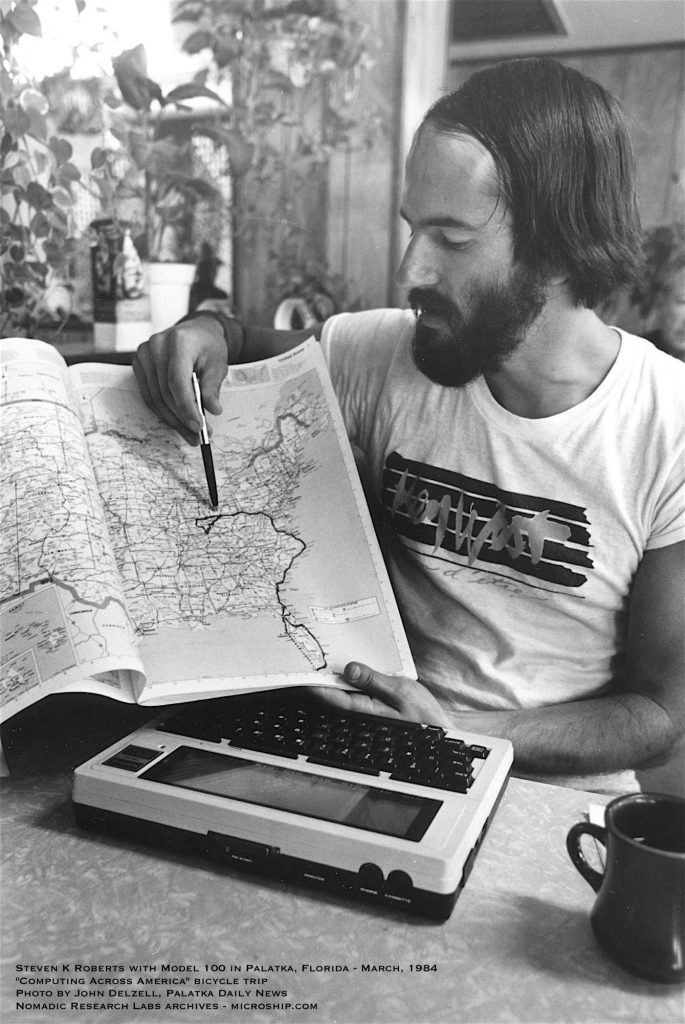 In May of 1986 I flew to New York and gave a talk at the National Online Meeting about the bicycle adventures… both the 9,760 miles I had completed and the new one about to begin with vastly expanded technology.  I had a long-standing relationship with this publisher, having been on the “Online Information Retrieval” beat as a tech freelancer before beginning the technomadic life, and this was their article about my talk. The photo above is not from the event, but was taken in Palatka, Florida in March, 1984 by John Delzell.

Self-styled “high-tech nomad” Steven Roberts — who freelanced electronically as he crossed the country on a 200-pound recumbent bicycle equipped with solar panels and who plans a second, even higher-tech trek — regaled an audience at the National Online Meeting in May with his adventures, providing a light touch at one of the final sessions (“Life in Dataspace“).

The freelance writer/personal computer-marketing consultant from Columbus, Ohio, took his work on the road in the fall of 1983. He used a Hewlett-Packard Portable Plus computer and a modem to write and send his stories, Dialog to do research, and CompuServe to communicate with his friends. Roberts’ book about his 9,760-mile 18-month trip, Computing Across America, is slated for publication later this year.

Roberts acknowledged that his monthly expenses were the same — about $2,500 — whether he was on the road (he still maintained a base office with a secretary) or “chained to a desk.” But the congenial computerized cyclist left no doubt in the audience’s minds as to his preference: “If you’re in the information business, you can really ‘decouple,’ and that’s what I’ve been up to.”

The tone for his journey was set, Roberts told his audience, early on at the only pay phone in a small Ohio town, where he stopped to upload a story. A dusty farmer in a pick-up stopped and gazed at the solar panels on Roberts’ low-slung bicycle, the text scrolling across his LCD screen, and the modem hook-up. “You from NASA?” he drawled.

After a few months on the road, Roberts said he abandoned his carefully planned itinerary. “I came to realize the whole point of the trip was not getting to any particular location,” he reflected. “The first time I slowed down and started enjoying myself, I…just realized that if you start thinking too much about where you’re going, you lose respect for where you are.”

His network of electronic friendships, Roberts observed, “became my enclave of stability, so signing on was really sort of like going home…. I got the feeling that I was just pedaling around my neighborhood, visiting people, and I started calling it ‘dataspace.'”

Questioned whether his electronic neighborhood was a complete antidote to loneliness on the road, he explained that his “thoughtful, intellectual friendships online” were balanced by “more fleeting personal ones on the road.” And then, he added, many friendships that began online became personal when he stopped in to pay a visit enroute.

One outcome of making friendships online, Roberts commented, was the almost complete absence of prejudice. “When you meet someone online, you interact as pure intelligences. It’s brain-to-brain contact and there is no other bias,” he noted, quipping that “the only social barriers have to do with typing speed.”

Although he admitted having had fears for his personal safety before starting out, Roberts said he was always able to defuse a potentially hostile encounter. “The best reaction to frightening situations was eye contact and making myself seem human to whomever was testing me.”

His most difficult experience happened when the outdoor temperature dipped to 22 degrees F in Utah, and his own body temperature soared to 103 degrees due to a brief illness. The chapter about that part of his trip he is calling “The Price of Adventure.”

Roberts says he is currently retooling and preparing for a second bicycle trip, where “the idea is to be in communication all of the time.” His rebuilt machine will have 20 watts of solar panels instead of the original five, and four computers instead of one. Roberts claims he will be able to type while riding, using a coded handlebar keyboard and an LCD on the bike’s front panel; he also says he will be able to send and receive messages via satellite while biking.