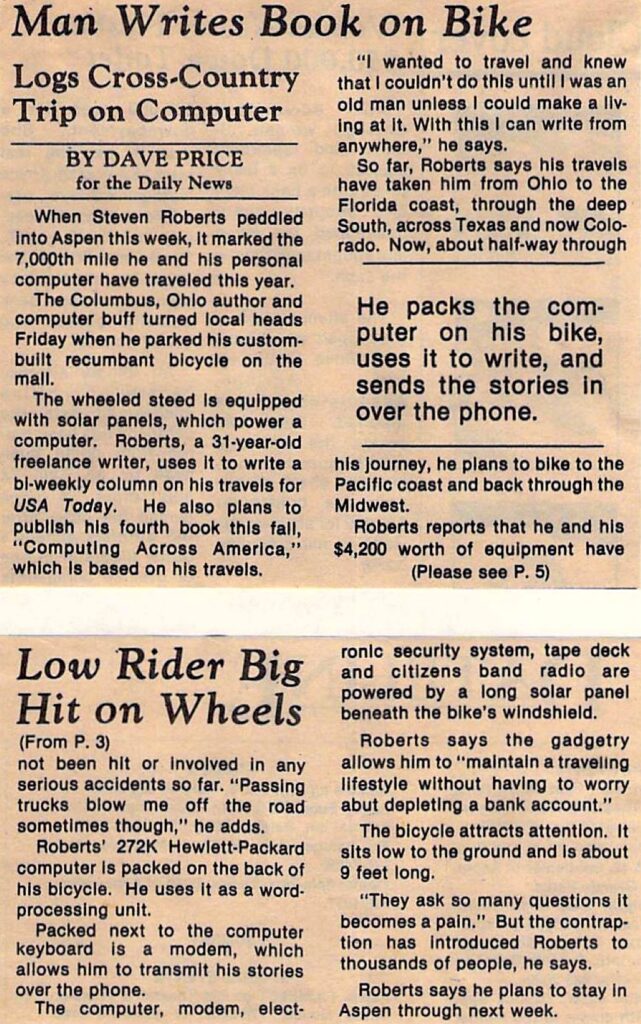 This brief story appeared during my stay in Aspen, a dreamy interlude in the Computing Across America adventure. Staying with fascinating people, doing a gorgeous photo session in the Maroon Bells, exploring the street life of an upscale town, and even profiling a fancy restaurant for USA Today… it was quite a week.

When Steven Roberts pedaled Into Aspen this week, it marked the 7,000th mile he and his personal computer have traveled this year.

The Columbus, Ohio author and computer buff turned local heads Friday when he parked his custom-built recumbent bicycle on the mall.

The wheeled steed is equipped with solar panels, which power a computer. Roberts, a 31-year-old freelance writer, uses it to write a bi-weekly column on his travels for USA Today. He also plans to publish his fourth book this fall, Computing Across America, which is based on his travels.

“I wanted to travel and knew that I couldn’t do this until I was an old man unless I could make a living at it. With this I can write from anywhere,” he says.

So far, Roberts says his travels have taken him from Ohio to the Florida coast, through the deep South, across Texas and now Colorado. Now, about half-way through his journey, he plans to bike to the Pacific coast and back through the Midwest.

Roberts reports that he and his $4,200 worth of equipment have not been hit or involved in any serious accidents so far. “Passing trucks blow me off the road sometimes though,” he adds.

Roberts’ 272K Hewlett-Packard computer Is packed on the back of his bicycle. He uses it as a word-processing unit.

Packed next to the computer keyboard is a modem, which allows him to transmit his stories over the phone.

The computer, modem, electronic security system, tape deck and citizens band radio are powered by a long solar panel beneath the bike’s windshield.

Roberts says the gadgetry allows him to “maintain a traveling lifestyle without having to worry abut depleting a bank account.”

The bicycle attracts attention. It sits low to the ground and is about 9 feet long.

“They ask so many questions It becomes a pain.” But the contraption has introduced Roberts to thousands of people, he says.

Roberts says he plans to stay In Aspen through next week.