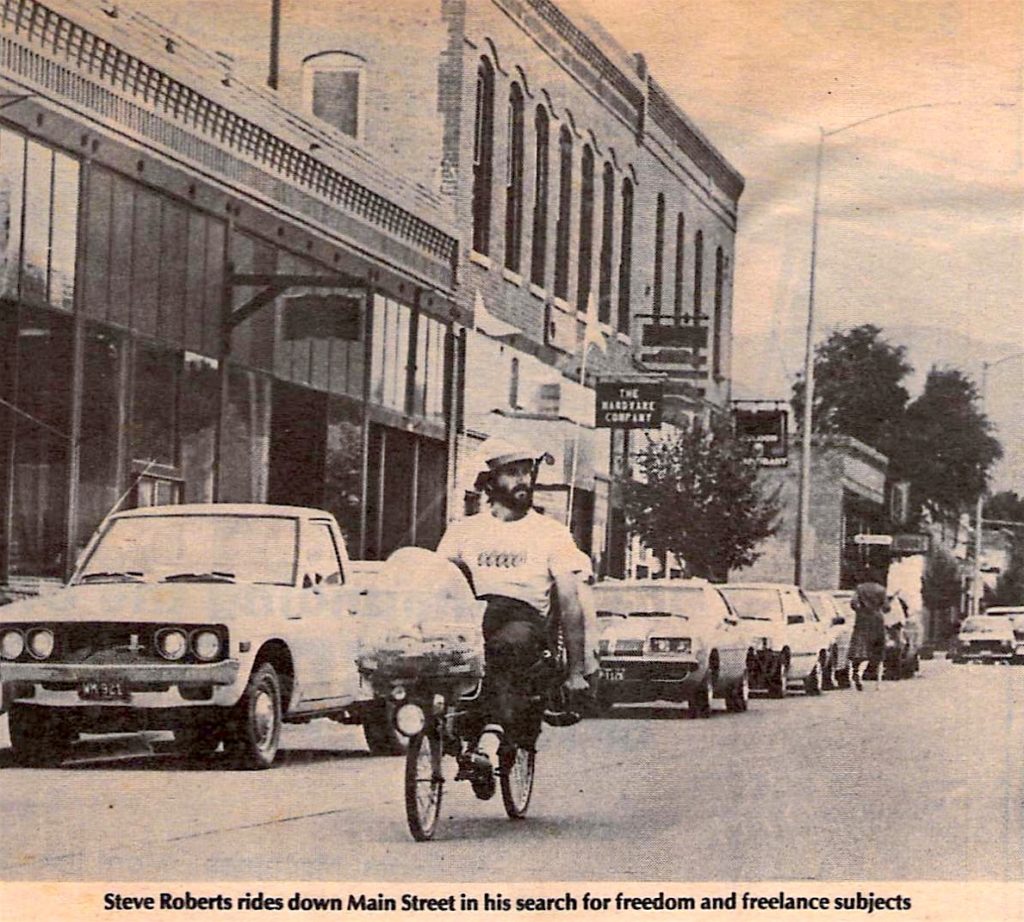 This interview took place the day after a terrifying event… losing my brakes on McClure Pass and flying down the mountain, out of control, watching my life flash before me just as they say it does….

I leaned hard into a hairpin turn, squeezing the one brake lever and sensing only the slightest deceleration. This was ridiculous, a blatant flirtation with death. An animal darted across the road and my startled steering reflex set up a sickening oscillation. Still the speed climbed, almost to fifty, blowing the helmet back on my head and roaring in my ears.

I was out of control.

An orange reflective dot appeared far ahead—a sign. I squinted into the screaming blackness to read it, eyes watering, heart racing, legs shaking, thoughts turning like a recurring nightmare to the broken wheel bearing and useless brakes. Would there be a guardrail to mangle me first, or would the road just disappear with a brief gravel crunch, leaving me wondering during that endless cry when the invisible rock would rise from the dark to shatter me?

My teeth hurt from clenching; my temples were frozen with wind-whipped tears. I began to get images of my life, distant vignettes of deep sadness. I had left so much untouched, so much unpublished. McClure Pass. I had a neighbor named McClure back in Dublin . . . ah, Elisse, sorry, I should have written . . . Would they reconstruct my bike like an airplane to determine the cause of the crash? Oh no, I forgot to mail that pretty piece of feldspar to Amy . . .

The sign flew past me in the lonely mountain night:

The next morning, I chatted with the owner of Life Cycles, a bike shop in Carbondale:

“I’m not really sure why I didn’t lose it,” I concluded, “but after sliding around that curve, everything became eerie and surreal—as if I had died and moved on to some kind of cyclists’ heaven. I had about twenty more miles of easy downhill, and a misty full moon rose over that ridge across the Crystal River. I thought about stopping in Redstone, but I didn’t want to shatter the mood. I was almost sorry when I hit Carbondale.”

He peered at me with a grin. “Ah, if you keep talking like that I’ll sell this shop tomorrow and join you.”

Steve Roberts is living a dream, and he knows it.

Roberts, 31, has spent nearly a year on the road, plying his trade while pedaling an outlandish-looking “recumbent” bicycle all over the country.

His trade is freelance writing, his bicycle is of his own design (much of it his own construction) and he writes on a solar-powered personal computer.

He has called himself a “high tech nomad” in a self-authored article for a magazine and he acknowledged being the unabashed object of a “lust for freedom” harbored by nearly everyone he meets.

And, if simply living this idyllic life were not enough, he now has a contract with the Simon and Schuster publishing company for a book about his travels.

Raised in Kentucky, Roberts’ home base is now in Columbus, Ohio, where he once ran a computer business. He also went to engineering school for just over a year, started an engineering company when he realized he could not get a job without a degree and has been involved in designing microcomputers.

A year and a half ago, he said he realized he was not satisfying his own needs by “being tied to a desk and living in a three-bedroom house in suburbia.”

He had been experimenting with various unorthodox bicycle designs, including “klunkers” (mountain bikes) and “recumbents” (bicycles on which the rider sits in a chair-like seat and pumps pedals located several feet ahead of him on an elongated frame).

So he decided to synthesize the three main interests he had at the time — personal computers, cycling and a yen to travel and write about the things he sees in the world around him.

What he came up with is his own small company, Computing Across America, through which he channels freelance articles for high-tech computer magazines, regular columns for USA Today and a computer trade journal and anything else he writes.

His company has three main components, he said — his Hewlett Packard 110 computer, the size of a small valise; his hookup to the national CompuServe telecommunications network; and his home office staffed by an assistant.

“She’s the one that makes me look stable,” he said of his assistant, Kacy, who for a percentage of the company income takes care of the basic business needs as well as editing and rerouting the articles, columns and manuscripts he sends home by computer-telephone link.

Roberts said he is almost to the seven-thousandth mile of what began as a 14,000-mile loop around the United States, although he abandoned the loop plan some time back.

Starting in September of 1983, he headed to the East Coast from Columbus, arrived in Florida by winter and stayed there until spring. He then followed the Gulf Coast over the course of the now-waning summer, up through Texas and into Colorado.

His arrival in Carbondale late Monday night followed a harrowing trek over Kebler and McClure passes. He said he reached the summit of McClure in “pitch blackness” after equipment problems slowed him down on Kebler.

After consulting with local bicycle shops concerning his cycle troubles, he said he plans to head southwest into Utah, Arizona and ultimately to spend the winter in the deserts of southern California.

Beyond that, he said, he has no particular plans other than to “do it until I get sick of it.”

He said he may spend a “couple of years in this country, then head for Europe.”

Drawing a verbal picture of Roberts’ present lifestyle provides a study in fantasy fulfillment — he makes a decent living doing exactly what he wants to do, he is free of the bonds and limitations of what most of us consider the normal, everyday grind and he gets lots of life-lengthening exercise every day.

Of course, there are problems, such as occasional hostility — “Every now and then, some jerk runs me off the road, but I haven’t been hit yet.”

And averaging 60 to 70 miles a day, with the peak thus far standing at 126 west Texas miles in one day, is a grueling occupation.

But the joy of accomplishment and self-sufficiency is evident in every word and movement he makes. Even when he is describing his system for powering his few appliances, he glows. Explaining how two small panels of solar cells provide juice to a carnival-style series of lights, a yacht horn and a security system activated by the slightest vibration, his hands make shapes and point at imagined artifacts while he animatedly chats away.

The same solar cells can power his portable computer, but he said he usually just plugs into a wall outlet when he stops.

One of the biggest pleasures of the trip obviously is the people he meets, and he has tales from all over the nation to describe how America reacts to a long low bicycle with a computer-friendly driver.

Among other things, he said, “people tell me all about myself” when they meet him, recounting magazine or television stories they read or saw. He said he ran into a couple from Michigan while eating in the Village Smithy in Carbondale, and they told him about a Roberts story on a Detroit radio station.

His presence also prompts incredulity — one old man in the East, happening upon Roberts transmitting a story over an outdoor pay telephone, paused for a long thought before bending over and querying, “Are you with NASA?”

But most of all is the joy of simply being out in the world instead of going the traditional office-to-home commuting trip.

“My life is now reduced to pure writing,” he remarked, explaining that his assistant takes care of the details and the business back at headquarters in Columbus.

As for his rather vague itinerary, he commented, “The only constraint is the weather . . . and deadlines.”

His most pressing thought these days?

To get to that southern California desert and start down the final stretch of his book, which is due at the publisher’s in March of 1985.

So, if you see a strange-looking bicycle, long and low, heading west . . . that’s Steve Roberts, striking out to meet his dreams.