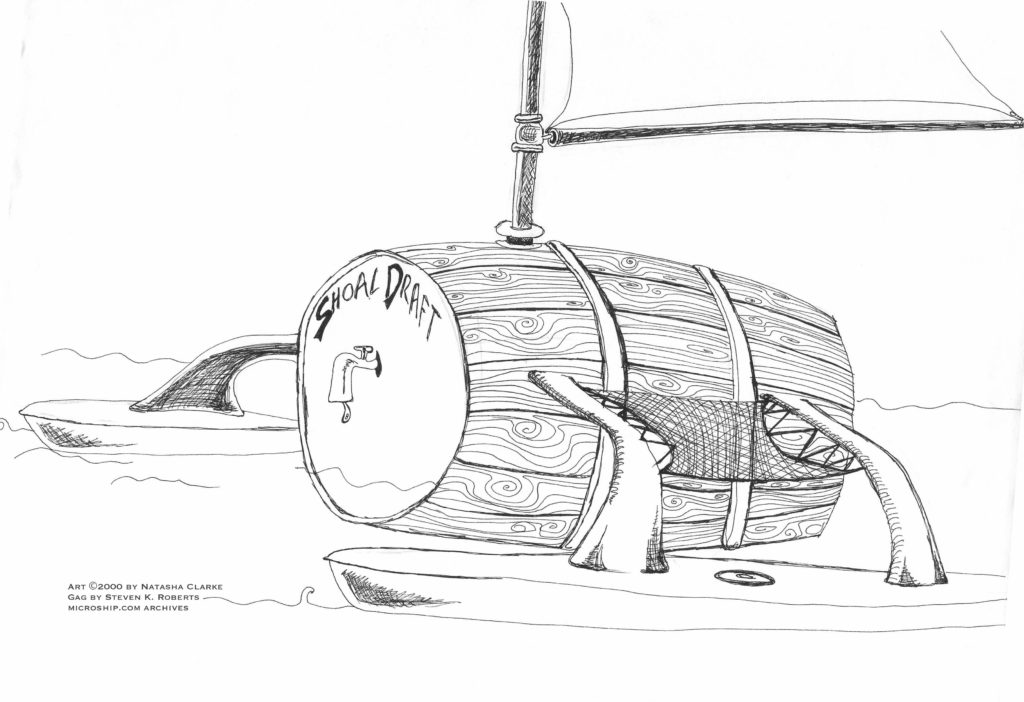 (Issue #101 of the Microship Status Reports)

Lots of developments since our last update! The recent infusion of investment capital from the venture partners has made a spectacular difference in our productivity here at Nomadic Research Institute, and we’ve just rented the adjacent 10,800 sqft building to ease the space crunch caused by all these new employees and pending shipments. The team is hard at it, building hydrodynamic simulations, contracting the carbon/core hull retrofit, developing product spinoffs, negotiating with the film producer, and otherwise keeping things moving.

The Microship-clone flotilla is expected to launch August 17 for the first group shakedown, pier-to-pier networking, and marina slip-connection test, and the skippers are looking for crew. If you’re interested, fill out one of the application forms on our web site and put your name in the hat. Introduction of our in-house microbrew, Shoal Draft (TM), is being timed to coincide with what should be quite the gala event — and Faun and I have decided to go all out and have our webbing reception at the same time. (The Best Man Page has yet to be named.)

Since Costner is part of the new venture capital team, we’ve had the added benefit of consulting on some of the more radical twists in survival-yacht design. We’re adding a second cycle to the still to handle those lingering asparagus odors (no thanks to Faun’s hydroponic garden!) and it looks like we’ll be installing that surplus repeating-harpoon launcher from the Japanese whaling fleet that we picked up at Minney’s. While heavier than the ballistic counterpart, we’ve had our attorneys checking maritime law issues and have found that this is the only anti-pirate countermeasure that is legal worldwide… and as you know, we always play by the rules.

(Well, OK, perhaps not entirely. I’m happy to report that initial satellite-hacks have been effective, enabling more or less unrestricted web surfing at sea, though we’re all a bit bummed that the creative P-code decrypting from the last volunteer party is about to become superfluous now that GPS selective availability is being turned off.)

In the rest of this update I want to breeze through some of the new technological highlights of the ship. As I mentioned, Deep Pockets have removed many of the developmental barriers that we faced as freelancers, and the very nature of the project has changed as a result.

After months of work on the solar/electric drive system, we had pretty well accepted a real-time 1 horsepower of thrust in full sun, or about 4 under battery cruise. While definitely the most ecologically sound alternative, this failed to accommodate some of the more aggressive applications for the bow harpoon, as well as Faun’s insistence upon water-skiing behind the Microship. As a result, we have contracted with a renegade branch of the Former Soviet Union for the installation of a small nuclear-powered turbojet thruster that should give us about 450 equivalent horsepower. The transom is being modified to take care of the new planing requirements, and we have a team working on a fast-stepping sloop rig to minimize the potential for dismasting under conditions of high acceleration.

In a recent issue, we discussed the Microship’s data collection system and corresponding “virtual cockpit” on our web site. Our bio guys have added an interesting twist to this by fully instrumenting our bodies and designing a “virtual couple” web page that allows any part of us to be clicked for close-up images and current performance data. (I never thought I’d become an image map…) With real time blood-gas analysis, pH, microtrauma sensors, epidermal distension, caffeine level, applied torque, surface heating, joint angles, and GSR measurements, we should be able to display a live VRML model of all physical activity. This has obvious implications under the controversial new Communications Decency Act, so we’re adding Exon-XOFF protocol to allow parental control over client-side graphic interpretation of the biophysical data suite.

Looking ahead to the next major phase of the project, we’ve hired a small group to begin work on the Microship’s successor. The theory here is that the first serious gale at sea will make us think twice about this nautical dementia, and contemplate a radical shift to something like a house in suburbia, as far as possible from water. Unfortunately, the Vulture Capitalists own our butts now, and we’re committed to follow through on the various contracts and options come hell or high water.

The solution to this potential problem lies in the work of the Virtual Microship skunkworks. They are building an autonomous unmanned trimaran to begin collecting thousands of miles of experience data, and by the time we’re ready to quietly retire from the harsh realities of cold water and relentless motion, our remote presence consoles should be ready. This will allow us to sail without leaving home, yet still have plenty of discomfort to write about. It will also solve all those pesky salt-water packaging problems that keep reducing computers to green fuzzballs in our early alpha tests.

Speaking of salt water, initial studies suggest that Faun’s VTC (Vegetable Torture Chamber) is so likely to become inundated with salt spray that we should plan from the beginning to raise only plants that thrive in harsh environments. As such, she is now working on kelp farming, and is thinking of raising zebra mussels as a hobby. Her plan is to periodically harvest her crops and return them to the rivers and seas, thus helping offset the ecological imbalances caused by human activities and overfishing in heavily-trafficked coastal areas.

Finally, I want to say something about the marketing activities that have been going on in the front office. The new national obsession with technomadics has already done wonders for our clothing line, and the manpack clones are becoming a real hit in Japan. We’re now preparing quarter-scale Microship and BEHEMOTH kits (assembly required) for schoolkids with attitude problems, and our executive-escape package has much of the fleet booked until sometime in 1998. The comic-book version of the status reports has achieved something of a cult following in the geek community. None of this leaves us with much time to write about the adventures, which is what started all this, but our Marketing VP sez that licensing the action figures will keep us going for the next decade.

With that, I need to get back to work on the neural net bilgewater minimization system, which uses a voting array of identical processors to analyze the depth and surface angle of water in the bilge, compare it to inertially-derived real-time ship attitude, calculate and account for sloshing effects, then optimally cycle the pumps to maximize motor life and power efficiency. Initial tests with a hydraulic simulator designed for us by Doug Trumbull should begin tomorrow morning.

Cheers from the lab!
Steve