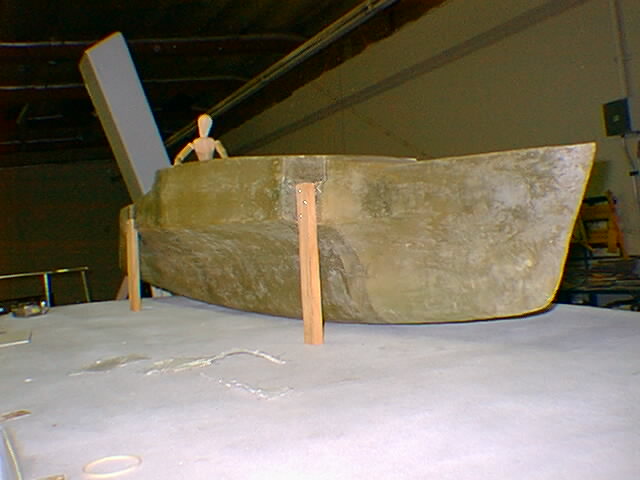 I’ve been so thoroughly immersed in hacking and writing that I’m becoming confused about the nature of that broad-spectrum light source that floods the front end of the building during about 60% of every 24-hour cycle… any theories? There are also cyclic variations in hydrocarbon-fueled vehicular traffic in the bituminous-covered region beyond our fused-silicate wall, suggesting that there may be lifeforms out there engaged in some form of commerce.

OK, I exaggerate. But we haven’t gotten out much, prompting Tom Fancher of Bradford-Adams to advise me this morning that we need frequent TOW… Time On Water. This, I presume, does not imply that our boat will need a tow. Our naysayers would then inevitably say “I towed you so…”

Anyway, on with Microship news!

Tales From The Sandbox

First, I want to rhapsodize for a moment. Sitting on the floor in front of the ship is a fiberglass model of the starboard half of the center hull, 1/5 scale, strikingly accurate. This unlikely apparition materialized from nothing a few days ago… when David Berkstresser dumped the AutoCAD model derived from our line-extraction marathon into his sandbox.

More accurately, he converted the file to a set of “bathtub rings” and passed them to a dedicated controller, driving stepper motors to move a print head that exudes hot wax just below the surface of a slowly-growing pile of sand. Every few cycles, a sand spreader lays down a bit more, then the process continues… wax layers about .100″ thick, each a precise representation of a slice of the model. When done, the loose sand is dumped, the cordouroy-like surface scraped smooth, and fiberglass applied. This is truly amazing, and the machine that has taken over his garage is nearly big enough to mold a Toyota. Watch this:

Dave has been working on this for a couple of years and is turning it at last into a business… a large-scale rapid-prototyping system. The Microship model, about right for use on stage during talks, is his test part; down the road we’ll probably use it for enclosures, deck modifications, and other secondary structures.

I have finally finished NRL-505, the first of the large-scale technical monographs that we are calling Design Packages. The subject of this one is the video turret (now free at the link), and for $25 you can buy a binder with about 70 pages of detailed documentation: schematics, FORTH and HyperTalk listings, mechanical CAD artwork, photos, and lots of explanatory text. We’re doing this on a registration basis so we can send out updates and bug fixes, and the first six copies are enroute to Halted Specialties in Santa Clara for retail sale. If you’ve been following our discussions of the turret over the past couple of years with more than passing interest, here’s your chance to get the full details… there’s enough information in this package to clone it.

There will be more of these… one of my Big Regrets about the BEHEMOTH era was that I never published a technical manual on the bike, or even any hard details about the subsystems beyond the online Bikelab Reports similar to this series. I keep thinking about going back and doing it, but technology moves on and so do I — writing about old machines is counterproductive. Lesson learned… as major subsystems of the Microship become completed, we’ll publish large-scale technical monographs to match. Not only does this capture a LOT of engineering effort in a form that is potentially useful to others, but hey, we need the cashflow! <grin>

Of course, getting this thing done was not without grief. I defaulted to producing the 100K of text and listings in my usual writing tool, Microsoft Word. Treading even lightly into the land of page layout, however, became a maddening experience that involved constant fiddling with disappearing footers, ignored page and section breaks, random spaces in the table of contents listing, and various other little differences between what’s on the screen and what prints. I suppose I’ll eventually join Faun in using PageMaker for everything (as she did for the Turret cover art), though the theory here was that the technical monographs would be simple text files, easy to maintain as the systems evolve. (Maybe it’s time to try Nisus Writer…)

It looks like the technomadic biomass-generation and energy conversion system is really going to happen. Faun participated in the recent Hydroponic Society of America conference in San Jose, significantly advancing the state of her knowledge about the complex range of options… and luring me into it as well. She jokes that since the garden now has a microprocessor and a suite of sensors, I finally find it interesting…

In addition to our major hydroponic sponsor (Pure Food) who’s providing growing media, nutrients, a nutrient film technique (NFT) development system, and various related hardware, we made some excellent contacts at the show. Patrick Joyce, president of Shiva Environmental Systems (soon to become Shivensys) in New Hampshire, spent the day with us — since he’s from Back East, I felt duty-bound to conduct a “geek’s tour” of Silicon Valley surplus and tech resources. He’s donating a wonderful sealed data-collection module for our system — a fully compensated low-power humidity, temperature, and light-level sensor.

These, it so happens, are the three key inputs to an algorithm that has been developed over the past few years by Peter Fynn in Ohio. He also spent a day with us, building a cardboard mockup of the Microship bow segment to enable empirical parking-lot determination of the required light-admitting openings. He just sent us a spreadsheet that embodies the algorithm, which uses the three sensor channels to determine the plant’s real-time need for water. This makes a lot more sense than just pumping according to a timer, since varying conditions drastically affect the plant’s transpiration. We’re now working on a high-density packaging system with direct watering of each plant, and are awaiting some Panduit wiring ducts to serve as collection troughs and support structures.

Mark Moorcroft is continuing to work on the controller, and we’ve had some difficulty communicating with the Dallas DS1305 SPI clock chip (though I just wrote a FORTH hack to control 8 bicolor LEDs with a pair of HC595 SPI shift registers). Anyone in this list have experience with bidirectional SPI interfacing to the HC11?

Meanwhile, work is slowly getting off the ground on the power management system, the Next Big Project. Otmar Ebenhoech, a guru in high-power, high-speed electric cars, shared a traditional Silicon Valley Brainstorming Pizza with us while scrawling switching power supply schematics… his input has somewhat demystified the peak power tracking problem.

Basically, I’ll dedicate a New Micros FORTH board to solar panel management. The array is segmented into eighteen pairs of 30-watt modules in series, yielding 1,080 watts feeding the 24-volt battery in 18 channels. The processor will scan all the channels continuously, collecting data on the voltage and delivered current, multiplying them to yield power, then “twiddling a knob” to continuously seek the peak (which does NOT correspond to sucking the maximum current out of each panel, contrary to intuition). This number is then used to increase or decrease an 8-bit value, which is sent — along with all the others — out the SPI channel to a long chain of 74HC595 SIPO shift registers. (Six others in the chain drive bicolor LEDs to actively display channel status on the power management panel.)

The values in the shift registers are then latched every time a master counter overflows, and a pulse-width signal is developed for each channel by setting a flip flop on master carry and resetting it when the master counter is equal to the value latched into the shift register (as determined by 74HC688s). This lets a single processor actively maintain 18 simultaneous PWM switching power supplies, each running around 30-50 kHz. The code will collect data on performance, passing it to the console Mac on demand to be used for bargraph display of total array performance, individual performance meters, failure detection, and so on.

That’s the theory, anyway… I’m now doing the initial CAD work and contemplating packaging options. This is just a part of the ship’s power system — we’re awaiting a reply from StatPower re a 20-amp AC charger, looking into a wind generator upgrade to a 24V model, and trying to decide how robust to make the dedicated 12V battery associated with the control/comm system console. The cabling alone is going to turn this into a monster…

Speaking of broadband RF transmitters, I decided to take a somewhat more proactive approach to EMI suppression than I did with the bike… seasoned readers of these musings may recall that we used a J-Com Magic Notch switched-capacitor birdie killer on the HF rig to deal with all the odd multiples of the various clock frequencies spread out across the electromagnetic spectrum like relentless jetskis on a pristine bay. With the Microship’s dependence on communications, this won’t be enough — we’re currently plagued by RFI from every 68HC11 board (including the HF automatic tuner), packet TNC, and embedded controller in the lab. Only the Macs seem to have been designed from the ground up with careful attention to RF silence.

The first sortie was a local search-and-destroy mission in the video realm, since herringbones have been infesting our camera channels. Armed with a bandolier of .1 monolithics and 10uF tantalums, I populated the decoupling holes in the NMI boards… then took a look at the video crossbar. True to form for the more successful student projects, it was done with logical accuracy and uncommon neatness, but with no awareness of noise issues. Fortunately, he did separate analog and digital grounds… but the power supply leads to the four Mitel 88V32 chips were not only devoid of any decoupling, but also daisy-chained off a single piece of #30 wire for +5, -5, and Ground. I extracted these from the complex point-to-point nest, supplied each chip with power from a common “star” source, and installed .1-10 capacitor pairs on both supply lines at each device. Tedious… but it worked! Clean, quiet video at last, and the ViXBAR node has been much less prone to crashing.

There’s one unresolved noise issue at the moment — there are subtle horizontal glitches in both turret camera channels associated with PWM control of the motor. My noise consultant (Dave Wright) has suggested proper L-C pi filtering on the input side of the H-bridge, along with dedicated motor supply leads all the way back to the source.

With persistent noise from a lightly-loaded .5-amp motor, it will be interesting to see what happens with a pair of thrusters, each operating at about 200 times that power….