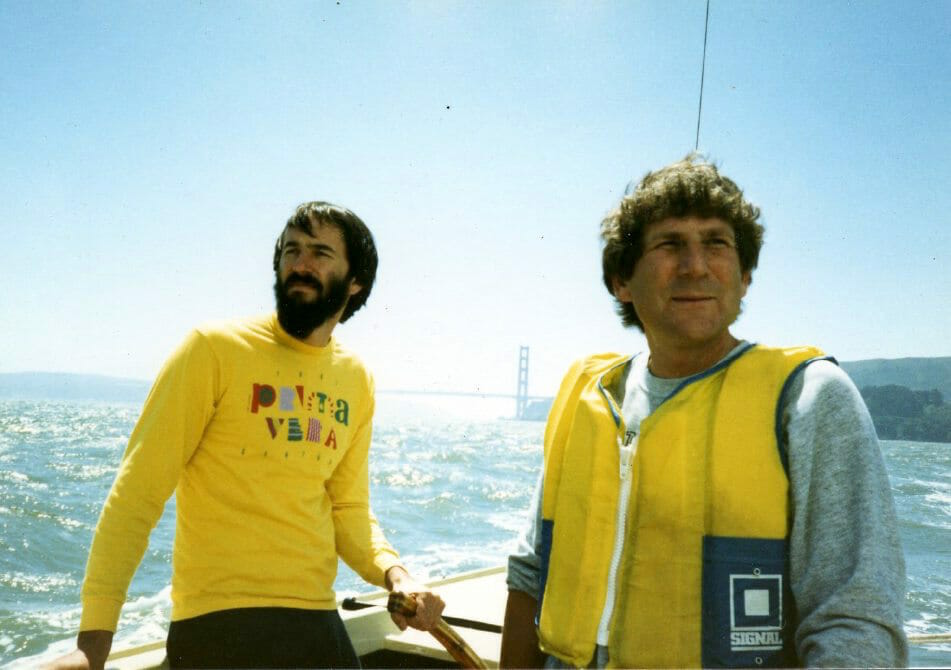 Texting while Driving in 1987

This posting to my Computing Across America column on GEnie came near the end of the Silicon Valley layover between the Winnebiko II trek down the Pacific Coast and the jump to Ohio to resume through the Northeast and down the coast to Florida. It includes a short item that may have been the first instance of texting while driving… chatting via binary handlebar keyboard and packet radio while pedaling through Palo Alto… talking with another early adopter of mobile technology who was on the road as well, enroute to Monterey with a laptop in the back seat! We even quipped that we were making history.

A fellow in Rochester writes: “Many of us in the less temperate zones wonder when you’ll be leaving the exotic climes of the West coast to embark on the real adventure, the soul-destroying adventure that ensues when you cross over into the desert. After all, any of us can have good time in Palo Alto…”

But Simon… we have been roughing it! Why, just yesterday we were sprayed with cold salt water as we danced in a 34-foot sailboat across the violent, whitecapped surface of San Francisco Bay. There were moments of terror as the deck dipped into rushing froth — as the women screamed and the captain intoned “It’s under control… it’s under control” like a reassuring litany while Angel Island passed to starboard.

Yes, we’re roughing it alright. Later, in the hot tub, we found the water at the bottom chilly — in sharp contrast to the steaming dark liquid that first lured the three of us in, Maggie and Laura and me. Soft wrestling in the murky depths, the two of them ganging up on me, tickling me, taking advantage of my exhaustion…

So you think this is an easy life, here in Palo Alto? Why, it fairly reeks of challenge, risk, and high adventure! My electronic calendar is crammed to capacity with fearless assaults on high-tech pinnacles (subtly camouflaged as speaking engagements): Hewlett-Packard. Apple. Sun. Intellicorp. All-nighters of software-hacking alternate with those of machining and still others of writing… leaving me wired yet exhausted, too limp to face the daily onslaught of perky voices and curious faces. And then there are the unexpected doses of adrenaline: skimming the Pacific with Alan in a Cessna 172, only to nose skyward, squeak over a cliff, and aim for the treetops of a 2,000-foot ridge. “There’s my property,” he says, pointing down as the plane closes in on a cluster of redwoods at 200 feet per second…

Adrenaline’s addicting stuff, isn’t it? But unlike most addictions, it’s pure delight when the conditions are right and horrifying when they’re not. Skydiving, breathless tickling marathons, climbing to Alan’s tree fort in the dark, taking a blind corner at 30 in a Vacuum Velocipede — those are OK. Getting cut off by a jerk-piloted dirty white van making a left turn onto Page Mill Road — that’s definitely NOT OK. That little buzz of adrenaline does little to offset the chilling awareness of extreme vulnerability, of mortality. Sometimes I get images… a mental slide show of what-ifs that urge me to flee these risky highways and move to something else, something gentle, something like a recumbent kayak or sailboat or even, while we’re dreaming, something airborne.

But in the meantime, lacking the requisite megabucks, I’ll be pedaling the Megacycle out of Palo Alto in about 2 weeks. The layover has served its purpose; the tires itch violently like a sneeze that won’t quite happen and the urge to roll is so compelling that it seems almost hormonal.

And besides, I want to play with my new toys where they’re designed to work best — out there on the road where comfort, like a gob of gelato, is rare treat instead of daily routine.

New toys, yes. There have been a number of techie delights to offset the stresses of my frantic business schedule. One of the major motives of this whole Palo Alto adventure was to get some of the bike’s sexier systems working. A few highlights…

And speaking of new magic in the communications world, have you heard about DASnet? Remember my urgings on the general subject of universally linked networks? Well, I was obviously not the only person thinking about that — it’s been done. For information on linking to ARPANET, ATT Mail, BITNET, CompuServe, EIES, EasyLink, MCI, Portal, The Source, Telex, TWICS (Japan), Unison, and UUCP, drop a line to Anna Lange (old email redacted).

Meanwhile, all this whiz-bang technology aside, what’s life like as we struggle through these last twelve rugged Palo Alto days? Well…

The dinners range from world-class Maggie-pizza to creative productions of pumpkin seeds, roadside vegetation, and fish heads — the spirited Conganese drummer Ma Boukaka to my right spitting eyeballs <tink> <tink> onto the plate, Maggie to my left helping herself to more flowers. Drinks run the gamut from exotic cognacs to homemade Kahlúa, a tasty substance that imposes its own curfew. Strangely confused conversations in the bike room continue for two or three minutes before we suddenly realize that I’m talking about interrupt logic and Maggie’s discussing aluminum fairing mounts. Daily show-n-tell jaunts throughout the peninsula are exhausting but profitable (at least in “soft dollars”). KLRS is on the radio — the area’s new station dedicated to that wonderful and yet-unnamed breed of music variously referred to as new age, Windham Hill, space, alternative, and yuppie muzak. Traffic roars by on Middlefield, now and again syncopated by the thundering bass of an East Palo Alto cruise-mobile. The perennial clutter is slowly getting sorted into boxes and disk files. There are far more amazing new friends and corresponding social opportunities than I can possibly keep organized in one overloaded wetware infosystem. And as always, free moments are filled by the detailed planning and fantasizing that precedes travel.

For this, I suddenly realize, is more the beginning of trip 3 than the continuation of trip 2.

So here we go again… drawing back the bow, steadying the breath, slowing the heartbeat, relaxing, sharpening the focus until the target point turns inside-out and becomes infinite space…