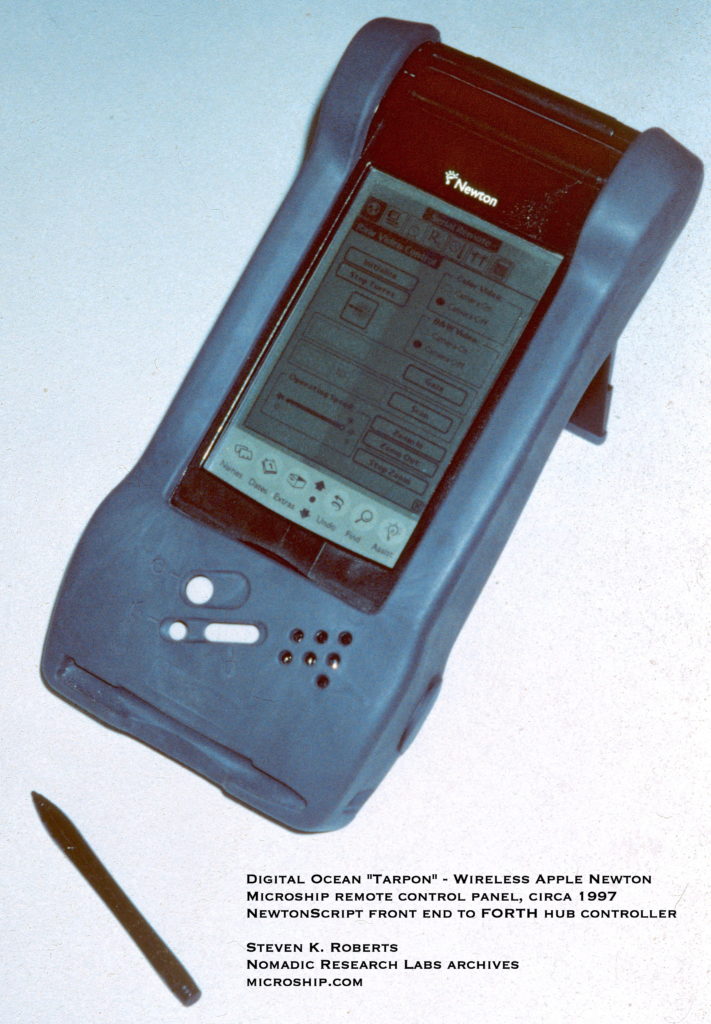 The three weeks since issue #108 have been a busy time. I’ve been in hack-mode almost daily, hunkered over the Macs, writing FORTH code, drawing schematics, head-scratching, debugging, mumbling incomprehensible jargon, and watching the days go by in a blur while the boat sits, untouched. Maddening, at times, but big progress is at last happening on that front — more in a moment!

First, the control systems. In our last report, I spoke of the peak power tracker design — that set of ideas has now been expressed as a dense 6-page schematic in DesignWorks. The whole thing, including the individual switcher boards, is going to take about 80 chips… we may want to try implementing the shift-register and comparator chain in an FPGA if that’s a more appropriate technology than point-to-point wiring 720 DIP pins, the convenience of insulation-displacement notwithstanding (so, does anyone have experience or design tools to contribute on this?). The design is looking promising… more details as we start on implementation.

Speaking of power, a few updates: Southwest Windpower has graciously agreed to donate a new 24-volt wind generator in exchange for our old 12V model, and we demounted the latter from its test fixture atop the Steve Prior stairway and shipped it to Flagstaff. In solar news, we’ve received a package of samples of various honeycomb core materials picked up at Boeing Surplus, of interest as the possible accordion substrate for our 36 Solarex ultralite 30-watt modules. And we loaned the extra Minn-Kota thruster (a third unit, heavily used for lab tests at the factory) to Andrew Letton for use in the chase boat for a recent cross-Tahoe swimming race. It performed magnificently, quoth he, though their old batteries died and they resorted to stinkpot mode after all. His intuition was that the thrust is substantial and on the right scale for our needs.

A second brainstorming session with Otmar Ebenhoech yielded the design of the individual switch-mode power channels, and we’re going to do them as printed circuit boards once we get a chance to whip up a 1-channel system test to see what smokes.

Meanwhile, I’ve been focusing on Hub-node communication tools, a long-overdue and critically important part of the whole system. All along, the only role the Hub has had in communication with the various nodes (turret, crossbars, etc) has been to become transparent on command, shuffling characters back and forth between its serial ports. This will be useful for compiles and extended hacking, but in normal Microship operation the Hub will have to do much more.

Basically, the machine’s role can be reduced to three tasks…

All this, of course, led to an unanticipated side trip. Almost immediately, new Hub code caused the long-expected crash resulting from running out of RAM (specifically, the FORTH dictionary walked over the variable space). I hauled out the New Micros documentation, figured out the requisite jumpers, stole a 32Kx8 JEDEC RAM from the ancient Winnebiko’s Traveling Software Model 100 Booster Pack, and fired it up. It worked; I felt good; I recompiled the tools and EEPROM code; it crashed. Hard. For 24 hours I was unable to get so much as a peep out of the 68HC11, even with repeated executions of the EEPROM wipe utility. Finally, an almost offhand comment by Bill Muench revealed a minor procedural error with the timing of resets in the erasure process, and voila… all was well. So now we have a 32K system… gonna compute the world!

I feel like such a power user… but you know what’s funny? In a FORTH control system, that really is a lot.

Before we leave this topic for things smelly and itchy, I want to thank Jim Rees, a long-time technomads list member passing through on a train last week from Michigan. He spent the day with us, and “sang for his supper” by making an excellent start on the 4-channel NMEA-RS232 interface module. Maybe it’s the influence of FORTH, but I’m really starting to like small, easily comprehensible hardware modules that plug together as needed…

As you know, the rig and structure has remained at the discussion level for quite a long time. We’ve had excellent advice from a number of respected marine architects, and there’s been a lot of hand-waving, sketching, and wall-staring around here… all with the intent of figuring out where to start grinding and laying up new structures.

I have assumed all along that the right approach was to spec the rig, use that to determine the key structural projects, then cart the ship off to a boatyard and pay the experts to do the critical parts. This led inevitably to a bit of sticker shock, with numbers in the $8,000 range casually bandied about by the practitioners of the art (who charge $50 an hour just for the efforts of their abrasives engineers, not to mention much higher fees for their own time). Naturally, I’ve been dragging my feet a bit on this… and so have the overbooked experts with whom I’ve been trying to establish a business relationship.

All that has changed. I decided recently to find a good experienced fiberglass guy who can come here for a few weekends, help with the critical stuff, put us to work on the demolition, and in the process convey an essential cored-composites learning curve that will let us comfortably take it from there with the myriad fabrication projects that lie ahead. After a bit of calling around, I was pointed to a recent Hawaiian transplant by Randy Devol, who was delighted with recent work on his TriFoiler… and so, we’ve just traded visits and show ‘n tells with Ross Handy over the hill in Santa Cruz. We have a deal!

At this writing, therefore, the lab is in a bit of disarray as we carve out a good shop and materials area, set up an epoxy work cart, and clear a path for the boat to move out to the parking lot on Sundays for the nasty fiberglass grinding work that can make life hell indoors. (Sundays, because that’s the sole weekly respite from the local parking wars… I can just see this 30-foot Klingon battleyacht with access steps and people in bunny suits spewing great itchy clouds of fiberglass dust into the parked convertibles…) Faun’s taking a shopping list to West Marine tomorrow to revel in the employee discount, and we’re getting started almost immediately. This is good timing, since we’ve also arranged rotating rig fabrication with Mike Leneman at Multihull Marine, and delivery of the 40-foot stick and all attached hardware is slated for the end of August.

To get started on all this, Faun set to work a couple of days ago, suiting up and attacking the old arch structure with chisel ‘n saw. Good progress… we can now see the original mast step, and have a much better idea of the bulkhead interface issues that lie just ahead.

First, thanks go to Panduit for sending along some test channels for the hydroponic system. Per Peter Fynn’s suggestion, we’re going to try an almost miniaturized technique for localized moisture injection and lightweight collection troughs. These look perfect.

Thanks also to the dozen or so people on the nomadness list who responded to my comments in #108 about page layout tools. I’ve had lots of advice (hearing from proponents of FrameMaker, StarWriter, ClarisWorks, and Word), and Jeff Alholm of Digital Ocean suggests that we accept the weaknesses and strengths of complementary products and use each for it’s main purpose… write in Word and port to PageMaker for layout. Since the learning curves are already behind us on these familiar tools, we’ll stay with them and press on.

Another update from the last issue — we reported trouble getting the Dallas 1305 SPI clock chip to work. That’s behind us now, just a pilot error as usual. Motorola SPI is one of those interface issues, like some UARTs, that involves a lot of confusing control register setup but after that is pretty straightforward. The 1305, by the way, is a very cool part…

In media news, we have a story in the current issue of Multihulls Magazine (March/April), including Faun’s fanciful PhotoShop fabrication that blends the Microship with a traditional tall-ship rig (from the Pilgrim replica in Dana Point). There’s also one coming in Internet Underground, and we’re filming sometime soon with Cyberlife on the Discovery Channel. The weirdest recent piece was in the San Jose Mercury News… the writer took a really depressing “BEHEMOTH is Dead” angle and kept up a recurring theme of the bike returning, like an aging elephant, to its Silicon Valley birthplace to die. Everyone has commiserated at this strangest-ever media treatment, but I suppose it carries a grain of truth… the bike has been inspiration, boom box, and showpiece on lab tours lately… but not the escape pod it once was.

Our most exciting media event, however, features Faun. A few weeks back, she was actively researching home base services for travelers… and I casually suggested that her work might make a good article for Cruising World. She talked to the editor, and, after a very grim week of Blank Screen Syndrome, Writer’s Block, Looming Deadline Stress Disorder, Agonizing Self Doubt, Sentence Structure Dysfunction, Procrastination Followed by Despair, and most every other ailment known to writers, she finished the piece and it was accepted. This is not a bad first sale for a beginning writer… it will be in the November issue. <applause for my sweetie>

And finally, I have two speaking gigs coming up… the first, technical and without bike, at the Silicon Valley FORTH Interest Group in Sunnyvale on August 24th, and exactly one month later, I’ll speak with bike at the Art Center College of Design in Pasadena. I mention this because the overhead of getting there via mothership is fairly substantial in terms of time and effort, and I’d love to amortize it with a few more paying gigs in Southern California during the same week. Any takers for a bike/ship slide/video multimedia extravaganza? <grin>

That’s it for the Microship news… now, back to setting up the fab shop!