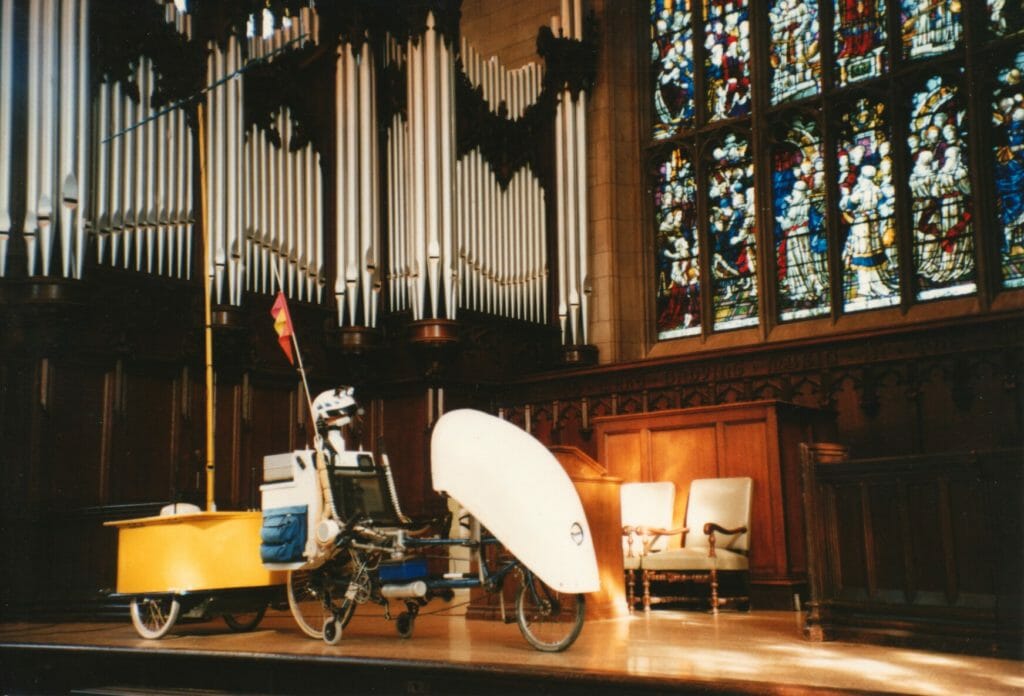 Ahhh, lemme tellya — it feels GREAT to be moving! For a confirmed technomad, periods of limbo are maddening (albeit relaxing). After the UCSD lab shutdown, we spent two months in Del Mar catching up on publication projects, taking the occasional beachwalk, snorkeling, lining up rigging help, planning a complex schedule of gigs and visits for this tour, writing for Multihulls and Cruising World, finishing a book proposal, and continuing the epic quest for our next lab site. By the time we finally rumbled up I-15 to launch this 10,000-mile trip, the cabin fever was near-critical… to the point that even going to the post office in the desert town of Barstow was rather a thrill.

And it got even better. We arrived last week in St. George, Utah, and spent a day hiking in Zion National Park with Dr. Kent McDonald, a friend from my previous travels. This was the first of a succession of amazements as we meandered through the mountains (we had been careful to schedule a bit of playtime amidst the frenzy of nomadic business). Slot canyons, landscapes vertical and eccentric, sheer drops, dizzying vistas, and a sense of unreality after two years in San Diego… this was a fitting return to the road. After a warm visit filled with good conversation and some cortisone for my injured shoulder, we pressed on — heads swiveling endlessly as we drove the mothership through unfolding astonishments to Panguich and onward to Calf Creek (hike the falls!) and into Colorado. (If you ever need to cross Utah from southwest to east, do yourself a favor and skip the 15-70 interstates. Routes 12 and 24 are not to be missed…)

By this time, we were sensing once again the sweet buzz of movement and change that keeps the nomadic addiction alive. Even a diesel truck offers occasional tastes of adventure and freedom… as long as you step out of the climate-controlled glass cocoon now and then to see/feel/smell/clamber reality. This we did at every opportunity, poking around the Black Canyon of the Gunnison, then mountain-biking 35 miles up Henson creek from Jim Mitchell’s exquisite hand-hewn home in Lake City (8600 feet) to the alpine world above 11,000 feet. We flew back down through forests of explosively yellow aspens and animated waterfalls… though I had no choice but to stop a couple times to crawl into long-abandoned mines — dizzying myself with bad air and rendering Faun nervous at my potential demise. After a night of offsetting keen awareness of long-forgotten bicycling muscles with righteous dark ale, we 4-wheeled most of the way up Engineer Pass and slogged the last couple miles in knee-deep blowing snow… standing at last on a windblasted ridge and gazing across at the valley of Telluride and a passel of fourteeners. At that very moment, people were lying naked and oily on Black’s Beach… while others were slaving away in fluorescent cubicles across the land. Both images seemed equally abstract as we huddled on the mountain and tried, impossibly, to take in the vastness.

And then another day of zooming — this time, ducking storms in the Rockies and making last-minute route changes to avoid closed highways and snowed-in towns, arriving after dark in the fringes of Denver. The evening was marked by absurdity — the room above us was actively flooding, but dealing with such an event was not in the job description of the desk sheep who grew angry with us for speculating that someone could be dying in the tub and gee, maybe they should check it out (or at least turn off the water, which after 2 hours had done rather considerable damage). This was in startling contrast to the independence of freelance nomadics…

Anyway, this was but a brief hiatus before our arrival in Boulder to speak at Qualcomm and visit Maggie (my dear “ex” with whom I traveled tens of thousands of miles over about 5 years). She and her partner joined Faun and I in a night of homemade sushi, amusements various, and hot-tubbing in the exquisite home of our Qualcomm hosts.

The local Qualcomm office is one of the most comfortable speaking venues I’ve ever enjoyed — staffed almost entirely by engineers working on CDMA (digital cellular) and the new Globalstar low-earth-orbit satellite system. As such, there was no need to translate when talking about BEHEMOTH and the Microship, and energy was high. Faun was gratified to see dozens of copies of our latest monograph (a testimonial to her growing publication design skills), fall into new hands.

And so, we are on the road — off tomorrow to visit Digital Ocean in Kansas City, speak at Washington University in St. Louis, drop in on my dad in Louisville, then head to Atlanta for another gig and onward to Florida. Moving, even by truck, is pushing all those technomadic buttons that keep these projects alive….

OK, maybe I should have posted the above back when I wrote it, but the road is like that… while waiting to finish it, new adventures kept happening. Since then, we yawned across the Great Plains, had a spirited talk at Washington University, flew over St. Louis with Chris Dunphy, hung out with my dad for a few days, then moved on to Atlanta. There, we spoke at the XcelleNet annual users group meeting, an amazingly energetic crowd who entertained us as much as we did them. Moving on to Dave Aton’s house, we relaxed a few days, spoke at Georgia Tech, and then flew with our host over Atlanta in a rented Cessna 172… each spending one-on-one time with him and picking up piloting pointers. Faun, of course, has now added flying to the growing list of interesting new things in her life… when every day is filled with discovery and stimulating people, it’s hard to be complacent!

Thus began a sabbatical from the business side of our tour… we cruised down the Atlantic Coast all the way to Key West, taking a week off email for the pure joy of network disconnection. After warming up with a kayak circumnavigation of Bahia Honda, we launched from our campsite on the east end of Stock Island (Boyd’s) and kayaked all the way around Key West… a round trip of 17 miles. This began gently, people-watching along the south beaches, but then we encountered the shipping lane and an incoming cruise ship. Suddenly there were reflected waves and powerboats everywhere, along with rain, high winds, and strong contrary currents to keep things interesting. We slogged on, determined, slowly passing through anchorages, heading up the west side of Fleming Key only to reconsider and turn back along the north side of Key West… at last becoming trapped in a bay with a 3-mile detour as the only escape.

A nude sailing couple pointed us vaguely to a mangrove canal, however, so we paddled under a bridge and found ourselves in different world. Narrow tunnels through thick mangroves, so tiny that in many places we could not swing our paddles… limboing under bridges and slipping through backyards, seeing Key West from a whole different angle (about as far from Duval Street as can be imagined!). After a few miles of gradually broadening canal, we popped back out into Cow Key Channel (named for the Manatees) and found our way through epic sunset and rapidly closing darkness back to our waterfront campsite. Ahhhhh.

At the other end of our Key West adventure spectrum was Fantasy Fest, a sort of Mardi Gras clone in which almost anything goes. (Almost anything did.) We flowed into the great swirling stew of human sensuality, and spent the evening both rubbernecking and inspiring similar behavior in others.

By now we have returned from island languor (stopping enroute to snorkel the reefs off Key Largo via 38-foot catamaran, swimming with Bubba the barracuda while carefully avoiding toxic knife-edge coral), and are staying in Tampa with Rick Waldbart, a netfriend and dentist. This leads naturally to barter, of course, so in exchange for dental checkups we are rewiring the power circuitry in his Sea Pearl 28 cat ketch.

This insanely brisk and sketchy update overlooks almost all the color of this past month, but highlights will be written with more passion and detail in the next issue of Nomadness Notes.

Finally, this wouldn’t be a genuine Microship Status Report without at least a few bits of technical and project info, so here’s what’s happenin’…

First, and by far the most exciting, I’m fairly bursting with a piece of news I can’t quite tell you until it’s official… but the epic lab quest seems to be culminating at last! As soon as it’s solid and OK to release specifics, I’ll post full details.

Motorola is donating the GMRS transceivers as well as marine VHF (both base and handheld), and we’ve also had a most intriguing meeting with the Digital Ocean folks… full wireless Appletalk for the Newton, with the ability to plug in PowerBooks on the same network. Looks like our backpack communication systems are defined at last! We also found some extremely cool photo backpacks made by Domke that look about right as the physical substrate.

The Microship rigging project is set to go — this speaking tour is more or less dedicated to raising the money for all the expensive stuff that makes the boat go. Step one is the dreaded “parking lot test” in which the amas will be deployed and rested on 55-gallon drums, center-hull supports removed, and water poured in to approximate the anticipated cruising load. This scares the hell out of me, frankly, but we are advised that it is better to break the crossbeams on land instead of at sea (this would be unnecessary if we had the layup schedule, but nobody really knows how many layers of what are in the folding akas and their hinging hard points). In the meantime, and assuming it will pass the test, we are learning at a furious pace about sail options, rigging hardware, optimal board design, and more.

Obviously, there has been little hands-on progress during this trip — we’re not in mobile-lab mode. But we’re scheduled to pick up the solar modules at Solarex next week, visit Quantum (which is donating our disk drives), and otherwise continue making the contacts that segue into the techno-magic that makes these projects work. Sail Expo, where we spent yesterday and will go tomorrow, is a prime source of input in the nautical domain… so despite all this fun, we’re moving ahead on the ship!

That’s it for now… I’ll post again from somewhere in the northeast. We’re off Monday to Orlando for a Dutch filming, up the coast via the Outer Banks, Richmond to visit another old friend, Solarex in Maryland, Quantum and Multihull Magazine in Boston, my bio-dad and Ocean Navigator magazine in Maine, back to Boston to speak at the DCI Internet World expo, zoom to San Francisco to speak at DECUS, down to Santa Cruz for a radio interview, then into Silicon Valley to begin establishing the new lab. Just another 5,500 miles…