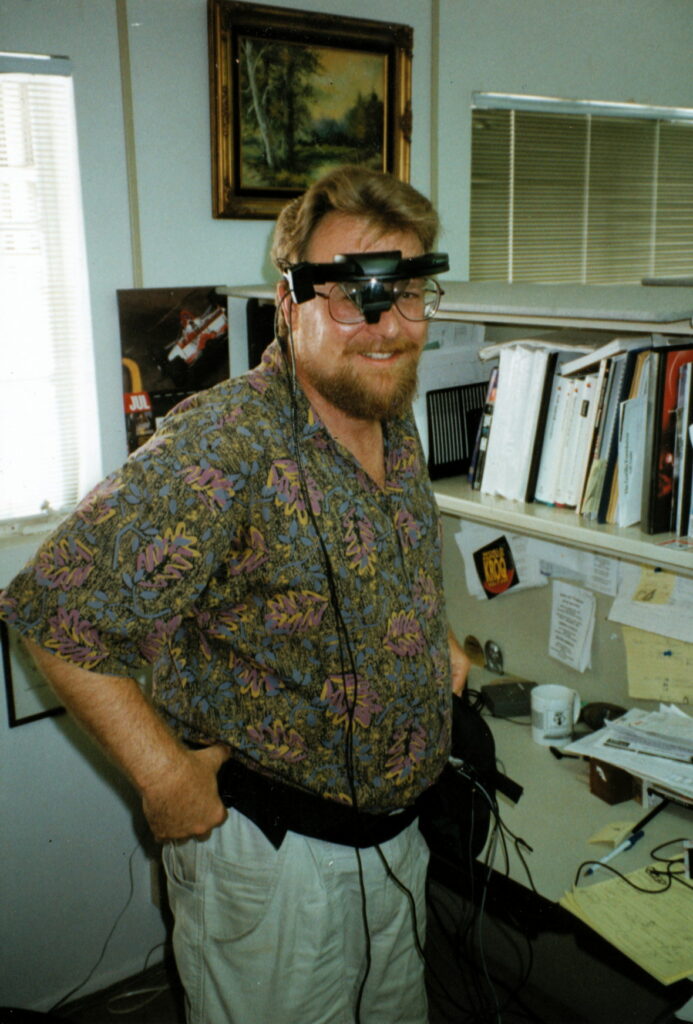 It has been a month and a half since my last update… and believe it or not, this is my first free moment to sit down and write. We are now halfway through the lab-relocation — we’ve moved out, but don’t know what we’re moving INTO just yet. Ahh, the nomadic life. (Photo above: Michael Clark of Apple with his “Macintush” wearable computer, during a visit with him at the Advanced Technology Group)

The lab has been compressed, amazingly, into 1600 cubic feet of storage space, only a parking lot away from our idle trimarans. We spent about a week engaged in this non-trivial process (and came away with the sore muscles to prove it); the 2 years in the UCSD lab have been, among other things, a slow but effective possession-accretion phase. A tiny percentage of that — a couple of Macs, other essential office tools, and Monograph/Shirt inventory — were set aside during the moving frenzy, and now share our rented ocean-view bedroom in Del Mar. And here, for the next couple of months, we’ll chill (as they say in the idiom) and strategize our next move.

Some interesting possibilities exist, and I wish I could tell you where the Microship rollout will take place a couple years from now. We returned last week from another of those 1500-mile round-trip jaunts up the coast — this time to see Mike Clark at Apple’s L.A. office (Alan Kay’s Learning Concepts Group), Corvallis (to visit OSU and do Da Vinci Days, which included a kinetic sculpture race), Livermore (to cruise the Labs with our host, Dennis Jones), Cupertino (to spend an intriguing afternoon at Apple), Palo Alto (for an endlessly interesting visit with Ted Kaehler), and a day each way at Faun’s Mom’s farm in Vacaville to relax (what a curious concept!) and catch up on recent movies. The potential lab sites that emerged from this journey have been added to those in Seattle, Santa Cruz, and San Diego… and the task before us now is to bring one of them to reality whilst recovering from the concrete and fluorescents of UCSD with a bit of much-needed beach therapy. If we can find the time…

Meanwhile, all physical progress on the ship has been suspended, except for today’s delivery of the first 6 (of 36) 30-watt ultralight solar panels (Thanks, Solarex!!!) and a wondrous selection of waterproof Impulse and Sea-Con connectors donated by Kevin Hardy of Scripps Institution of Oceanography. Lifesavers, these… normal connectors turn green and dissolve within weeks out there in the Aqua Regia. Also, Apple gave Faun a Newton to match the one I just traded my night-vision binoculars for… these are *wonderful*!

In addition to all this strategizing, schmoozing, and schlepping, we managed a bit of adventure since last I posted one of these reports. In the company of our friends Lonnie and Sarah, we spent a week aboard a Catalina 27.

A much more substantial story of this rather wild adventure appears in the forthcoming Nomadness Notes #28 — if you’re not on that mailing list and wish to be, please let me know. (In general, Nomadness Notes are the tales and overviews; Microship Status Reports are technical details and project chronicles. The print Monographs incorporate both, as well as new material and images.)

Anyway, we had a grand tease of adventure recently, at last getting our entirely too sedentary butts out on a boat and out of sight of land. We were honored by visits from cavorting dolphins, including a magical pair of celestial beings swathed in green phosphorescence who livened the dog watch by flanking our bow (wow!). We frolicked in the sunshine, clambering the hills of Catalina and pausing silently to watch a quartet of wild boar snuffling among the succulents — their little razor-backs and pigfeet cute but for the thought that Mom might be about to thunder from the underbrush to defend her young. We interceded in a drama involving two terrified Korean fishermen and a crazy American captain who was trying to sink the ragged old Judy Lee with a hammer, and we translated their predicament to the Coast Guard. We drifted into another world, snorkeling in the microcanyons off Emerald Bay in the company of orange Garibaldi and anemones — our bodies flowing to and fro with undersea grasses as the surge breathed slowly and implacably in and out. And we added extensively to our knowledge of boatlife, learning the countless daily lessons in a way that no daysail can teach.

Night navigation into an unfamiliar harbor… bleary-eyed rotating watches… crossing busy shipping lanes at 3 AM and trying to anticipate potential collisions with massive freighters… learning the servo-loop characteristics of Homer the autopilot… the tendency of certain things to fall overboard… the problem of adequate sleeping space… the constant challenge of keeping TOO MUCH STUFF stowed and organized… mooring procedures… what does NOT constitute an adequate dinghy… myriad comfort issues… and as always, the tease of travel and the new lists of things to remember for our own, still embryonic, vessel.

All this suggests that development priorities should favor the Manpacks and sea bags… providing the essential tools to get us out on OPB’s (Other Peoples’ Boats) as much as possible during the development of our own escape pod. One such potential opportunity exists… a jaunt from here to Florida via the Panama Canal.

Obviously, the critical issue now is getting the lab re-established — not only is this stasis rather non-productive, but the security issues of having 95% of everything I own stashed away in an undefended storage unit maintain a low-level nagging uneasiness somewhere in the back of my brain.

The current plan is to spend 2 months in this Del Mar apartment, hit the road for most of October (a speaking gig in Atlanta provides the anchor for another of those restless loops around the country…), hopefully spend November on the 48-foot yacht enroute to the Caribbean, knock off three gigs in early December (DECUS, Livermore, and possibly Interval Research), and then, we hope, set everything up in the new Microship lab somewhere on or near the West Coast.