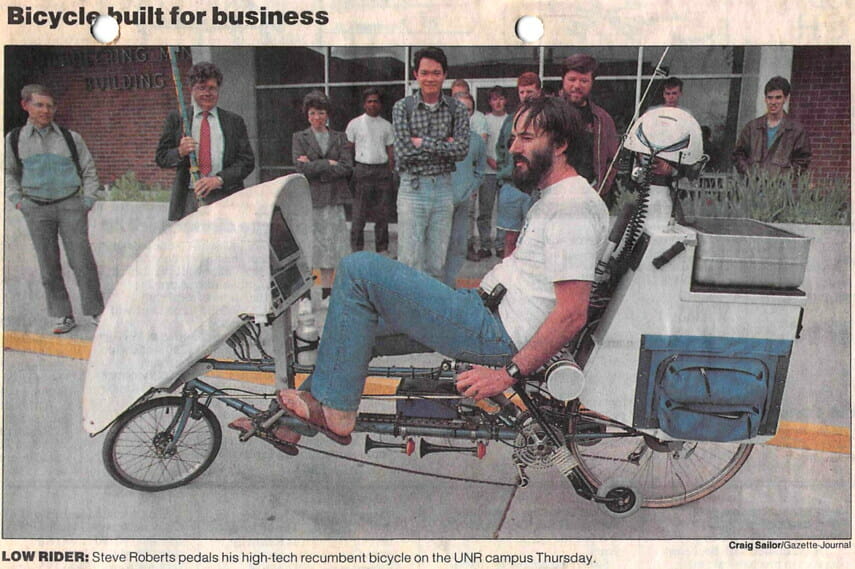 This was a time of nearly overwhelming publicity, with BEHEMOTH getting splashed all over mainstream media ranging from the Phil Donahue Show to the Wall Street Journal. I had a friend in Reno who arranged for a presentation at UNR, and the next day I did a photo shoot for People Magazine. It was all quite crazy, though in the back of my mind I was fantasizing about making the move to water… dreaming of high-tech kayaks. Still, the show must go on!

As Steve Roberts pedals his $1.2 million bicycle, he can chat on the phone, get a fax, play jazz on his Sony compact disc player and Blaupunkt speakers, fight aliens in a video game or type at 35 words per minute.

A tube runs from a 7-liter tank to circulate ice water through a yarmulke-like cap on his head to keep him cool in the heat.

If he stops his bicycle and trailer, which weighs a combined 580 pounds, he can use his shortwave radio powered by his 72-watt solar panel. If he’s not around his telephone, his answering machine takes the call.

If someone wants to subscribe to his “pretty much quarterly” journal, Nomadness, and can only pay by credit card, Roberts has the device for automatically verifying the credit card from the side of the road.

And if someone steals his bicycle, it immediately calls 911 and, through a voice-synthesizing computer chip, tells the dispatcher: “Hello. I’m a bicycle. I’m being stolen.” Then, through its satellite uplink, it gives the dispatcher its longitude and latitude.

Roberts is the designer,pilot and advocate of BEHEMOTH (big electronic human energized machine — only too heavy). He showed it off Thursday at the request of the University of Nevada, Reno Computer Science Department and the Sierra Nevada Chapter of the Association for Computing Machinery.

Roberts, 39, remains in Reno today for an interview with a People magazine reporter, but BEHEMOTH will not be on display.

The tools and gizmos on Roberts’ bicycle have applications important to more people than just those who favor tape across the bridge of their glasses and plastic pocket protectors for pens.

He can get electronic mail messages from all over the world. With his palm-sized computer and its radio link to the three computers on BEHEMOTH, he doesn’t even have to be near the bicycle to read them.

This is the forerunner of the technology of the future that will allow people to send and receive messages, and perhaps even talk to each other, at virtually all times.

There are devices on his helmet that allow him to control the cursor on his Macintosh computer screen simply by moving his head.

The helmet also has a miniature computer screen for his on-board IBM-compatible computer, a rear-view mirror and two headlights,

He once walked into a fast food restaurant wearing the helmet. The woman behind the cash register was aghast as he approached, so Roberts played along. “I said, ‘Give me a burrito. Resistance is futile.'”

BEHEMOTH is actually the third high-tech bicycle for the college dropout. He has logged 17,000 miles on the bicycles.