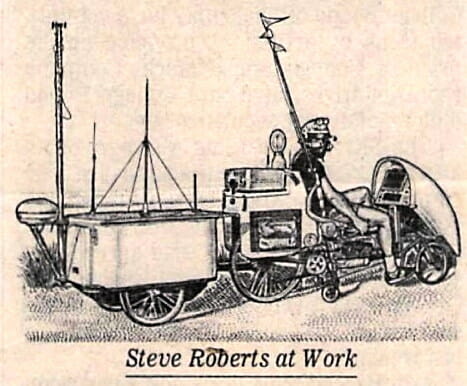 This was a pivotal piece in the epoch of BEHEMOTH, being on the front-page of The Wall Street Journal. The pace of media coverage accelerated by an order of magnitude almost immediately, including a full hour on the Phil Donahue Show (apparently he read this article, tossed it on his producer’s desk, and said, “get this guy.”) Of course, the article couldn’t resist a few back-handed compliments… when the WSJ pronounces you “cheerfully irresponsible about money,” you can’t really take yourself TOO seriously where financial matters are concerned. (And indeed, it turns out they were right.)

A Restless Loner on a Custom Bike: It’s HAL on Wheels

Steve Roberts nine years ago moved out of Columbus, Ohio, and into what he calls Dataspace, a world of electronic networks where home is just an abstract concept. He sold his house, figured out some clever ways to pack electronics onto a bicycle and hit the road.

Ever since then, Mr. Roberts has been pushing back the frontier of telecommuting. He works outside, traveling as he pleases, in shorts, stopping for a picnic or a stroll along a river whenever he wants to. On the other hand, his bicycle-office now weighs more than a quarter of a ton.

Mr. Roberts, a 39-year-old computer consultant, author and speaker, has a cellular modem on his bicycle so that he can pick up electronic mail while he is on the move. Urgent e-mail gets routed through a satellite hookup and dropped into his bicycle’s computer system immediately. The bicycle will announce: “Mail has arrived.” If he isn’t on the bike, the bike will page him. A ham radio lets him troll the airwaves for conversation if he feels like chatting.

Mr. Roberts has four computers built into the bike: two IBM-compatible machines, one Macintosh and one Sun SPARCstation. He also has 40 other chips of comparable processing power. The bike could pass for a small mainframe.

With the electronics connected into his helmet and handlebars, Mr. Roberts can do all his conversing and corresponding on the move. A computerized ultrasonic device built into his helmet allows him to move the cursor around on the computer screens just by moving his head. Using eight keys built into his handlebars, he can type on the order of 100 words a minute using a special shorthand. Or he can use the keys to play a synthesized flute.

Mr. Roberts usually has a tiny computer screen pulled down in front of one eye. Wires and tubes run into the back of his helmet, hooking into speakers, a microphone and a system that circulates coolant around his head.

The bike is an eight-foot-long recumbent model, so Mr. Roberts looks like he is pedaling a lawn chair. He pulls a wide, bright-yellow trailer that is covered with solar panels. A huge antenna and some flags stick up from it. Blaupunkt speakers right behind Mr. Roberts’s head are usually blaring music from his CD player. On the front is a sort of cockpit, with three computer screens and numerous gauges. Fully loaded, the bike weighs 580 pounds, not counting the 6-foot-4, 200-pound Mr. Roberts. “It used to get 40 miles to the pizza,” Mr. Roberts says. “But as it’s gotten heavier it’s down to 25 miles.”

Mr. Roberts, who is cheerfully irresponsible about money, supports himself largely by relying on others: The $300,000 of equipment on his bike is almost all donated by manufacturers intrigued by his work, and he often combs his “hospitality database” of 4,800 people to find a place to stay at night. He also does free-lance writing and publishes a quarterly journal called Nomadness that has 1,000 subscribers; he sells almost all the subscriptions himself from his bicycle, often using a credit-card reader that does its check through his cellular modem. He has also written a book, called Computing Across America, about his first cross-country trip.

Mr. Roberts hasn’t actually been pedaling nonstop for nine years. After an initial odyssey of five years and 16,000 miles on early office-bicycle prototypes, he paused in Silicon Valley for four years, knocking around in computer circles. But he got a bad case of what he calls “tire itch,” so he went to work building a bigger, better bicycle. After a 750-mile shakedown cruise, last week he hit the road again. His current behemoth is called the Behemoth, which stands for Big Electronic Human-Energized Machine, Only Too Heavy.

Mr. Roberts, an intensely verbal sort, has written of “leading two simultaneous lives. One is visceral, sweaty, attuned to every hill and head wind. The other is ethereal, intellectual, an electronic interlocking of imagination and communication.” Since all the new electronics have made the experience even sweatier than it used to be, the bike is now up to 105 gears. Three braking systems aim to prevent a repeat of the scare he had when his brakes gave out while he was descending a winding Rocky Mountain pass. Going up a steep grade, he goes just over 1 mph (at that speed, rapid-deployment training wheels pop out to keep him from falling over). Cruising speed is just 9 mph.

Maggie Victor, who traveled with him on her own bike for one extended trip, says they lived in such a hand-to-mouth fashion that “we’d sell some books and I’d go to the grocery store.”

Mr. Roberts has picked up some consulting for companies, such as Sun Microsystems Inc., that are interested in mobile computing. John Gage, director of the science office at Sun, talks of how a huge market will develop for mobile computing and communicating devices and says: “Steve has built that already. It just weighs hundreds of pounds and has to be pedaled.” Mr. Roberts did, however, decide not to go pro: He won’t carry ads on his bike.

He is building a business as a speaker, but that is making him modify his aimlessness. To get to and from engagements, he has bought a truck with a camper attachment and is pulling a trailer full of wrenches, soldering irons, computer chips, spare tires and whatever else he needs to reinvent the bike. He will drive to a speaking job and then begin wandering, using “the mother ship” as a base.

“This goes against everything I believe in,” he says of the 7-miles-per-gallon vehicle. He adds, though, that “I once calculated that it gets 1.2 light years per cubic mile of gasoline. It sounds better that way.”

Mr. Roberts comes by his restlessness honestly. An adopted child, he tracked down his biological parents a few years ago and found that his often-married father had the same aversion to commitment and that his grandfather had built a boat, sailed it up and down the East Coast and written about his adventures.

Mr. Roberts tinkered as a boy. To deal with neighborhood bullies, he once built two powerful squirt guns that could fire electrically charged salt water — primitive stun guns, essentially — and attached them to his bicycle. He tried college briefly, but felt that the way engineering was taught was akin to “going to art school and being taught to paint by the numbers.” He dropped out and hitchhiked around the country, occasionally working on barges or hopping freights.

At about that point, in the early 1970s, the first microprocessors were becoming available. Mr. Roberts tried building a computer around one well before the first personal computers hit the market, placing him close enough to the cutting edge to get consulting contracts from big companies. He also wrote four books. But the more he turned electronics into a job, the more he felt he was just squelching his passion.

The writer of this piece, Paul B. Carroll, is the author of Billion Dollar Lessons, an excellent book on major business failures

“I briefly tried growing up,” Mr. Roberts says, “but it was a bad idea.”

So he is back on the road, although his life isn’t entirely devil-may-care. He worries enough about the bike that he has loaded it with security systems. If someone gets within 15 feet of it, the bicycle will page Mr. Roberts and warn off the curious by saying something like: “You are being monitored by an alien spaceship. Do not touch the bicycle or you will be vaporized by a laser beam.”

If someone tries to move the bike, it will broadcast distress messages over ham radio frequencies and a satellite network. It will also dial 911, politely identify itself as a threatened bicycle, consult the Global Positioning System and tell the police its latitude and longitude to within 50 feet.

But more often, when the bicycle talks, it is to have fun. Mr. Roberts says he was watching it from a restaurant window recently when a small boy carrying a skateboard walked by. Using a radiotelephone, Mr. Roberts had the bike say: “Hey, kid, that’s a funny-looking bicycle you’re carrying.” The boy, startled for a moment, said: “Don’t be silly, Mr. Bicycle, this is a skateboard.” The bike and the boy chatted for a bit, then the boy said, “Wait here a second. I want you to talk to my mother.” When the boy returned, Mr. Bicycle stayed silent. But when the frustrated mother started to drag the boy away, the bike said: “Hey, pretty girl, want to go for a ride?”

This article was reprinted as a cover story in American Bicyclist and Motorcyclist the following month.