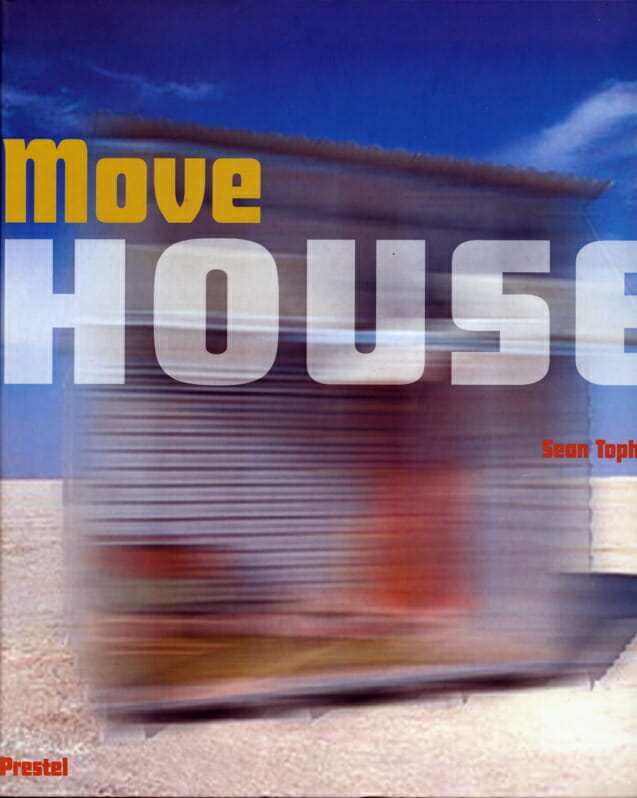 I was contacted in 2003 by Prestel, an “Art and Architecture Publishing House based in Munich,” asking if I would send some photos for use in a book by Sean Topham about portable architecture. Following their success with Xtreme Houses, this one would focus on a subject dear to my heart… highly mobile residences. I said yes, and was quite delighted with the resulting book, Move House. Although some of the featured projects were more design concepts than reality, most were about actual creations… and the production quality of the 144-page volume is lush. It’s a fun read, and I’m happy to be a part of it (pages 132-135). You can click to embiggen the photos.

Weighing just over 260 kilograms when fully loaded, Behemoth may be a heavyweight bruiser of a bicycle but it barely makes flyweight when compared to other mobile homes. Its predecessors Winnebiko I and II are even lighter, and with the three machines Steven Roberts pedaled over 27,000 kilometers around the USA. Unlike the majority of projects in this book, Roberts’s array of high-tech homes on wheels are not formed by a need for movable shelter but by a passion for communication.

The adventure started in 1983 when Roberts incorporated his interests in cycling, electronics, adventure, and ham radio into a pioneering mobile-home concept. He ditched his suburban lifestyle and took to the road on a recumbent bicycle dubbed Winnebiko. A portable computer, a six-watt solar panel, and the data communication link CompuServe gave Roberts the freedom to cycle around the United States while making a living from magazine assignments, consultant positions, and other freelance activity. Winnebiko came to represent a new type of freedom. Roberts described it as “a machine that eloquently symbolized the daring notion that people could indeed be free, follow their dreams, and break the chains that had always bound them to their desks.”

In 1986 Winnebiko was replaced by the much more sophisticated Winnebiko II, which satisfied Roberts’s main objective of wanting to be able to type while pedaling. Packed with switches, processors, and LEDs the machine earned Roberts a further 9,500 kilometers. His physical location grew less and less important. What mattered most was maintaining a presence in the online networks. “Home, quite literally,” says Roberts, “became an abstract electronic concept.”

Behemoth [Big Electronic Human-Energized Machine … Only Too Heavy], the final incarnation of Roberts’s wired bicycles, was three and a half years in development, but he only used it for a further 1,500 kilometers. In addition to the computing facilities of a small laboratory, the bike and its trailer also carries a full suite of camping and life-support equipment. The road no longer held so many surprises for Roberts and in 1992 he switched his attention to water transport with the Microship project.