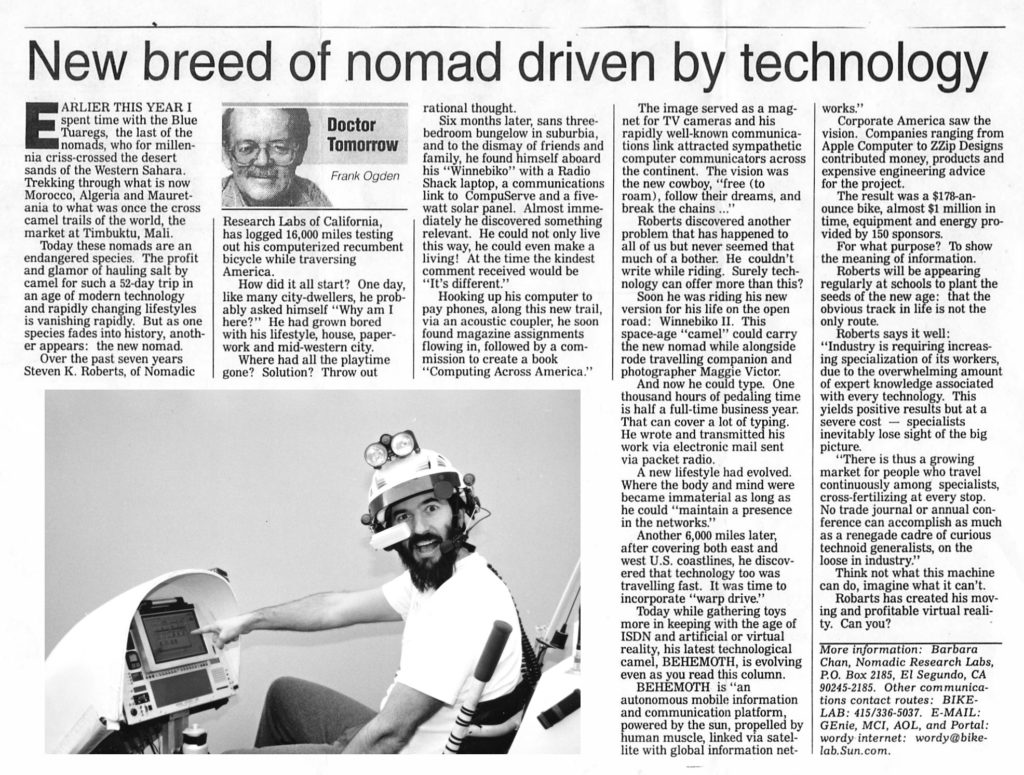 This Doctor Tomorrow column was written during the final phase of my time in the Bikelab at Sun Microsystems, and is a lovely take on the implications of the technology that was being packed ever more densely into the BEHEMOTH bicycle. The photo was taken by Maggie Victor against a wall at Sun, and this appeared in two forms with slightly different text… one above and the other at the bottom of this page.

Earlier this year I spent time with the Blue Tuaregs, the last of the nomads, who for millennia criss-crossed the desert sands of the Western Sahara. Trekking through what is now Morocco, Algeria and Mauretania to what was once the cross camel trails of the world, the market at Timbuktu, Mali.

Today these nomads are an endangered species. The profit and glamor of hauling salt by camel for such a 52-day trip in an age of modern technology and rapidly changing lifestyles is vanishing rapidly. But as one species fades into history, another appears: the new nomad.

Over the past seven years Steven K. Roberts, of Nomadic Research Labs of California, has logged 16,000 miles testing out his computerized recumbent bicycle while traversing America.

How did it all start? One day, like many city-dwellers, he probably asked himself “Why am I here?” He had grown bored with his lifestyle, house, paperwork and mid-western city.

Where had all the playtime gone? Solution? Throw out rational thought.

Six months later, sans three-bedroom bungalow in suburbia, and to the dismay of friends and family, he found himself aboard his “Winnebiko” with a Radio Shack laptop, a communications link to CompuServe and a five-watt solar panel. Almost immediately he discovered something relevant. He could not only live this way, he could even make a living! At the time the kindest comment received would be “It’s different.”

Hooking up his computer to pay phones, along this new trail, via an acoustic coupler, he soon found magazine assignments flowing in, followed by a commission to create a book “Computing Across America.”

The image served as a magnet for TV cameras and his rapidly well-known communications link attracted sympathetic computer communicators across the continent. The vision was the new cowboy, “free (to roam), follow their dreams, and break the chains …”

Roberts discovered another problem that has happened to all of us but never seemed that much of a bother. He couldn’t write while riding. Surely technology can offer more than this?

Soon he was riding his new version for his life on the open road: Winnebiko II. This space-age “camel” could carry the new nomad while alongside rode traveling companion and photographer Maggie Victor.

And now he could type. One thousand hours of pedaling time is half a full-time business year. That can cover a lot of typing. He wrote and transmitted his work via electronic mail sent via packet radio.

A new lifestyle had evolved. Where the body and mind were became immaterial as long as he could “maintain a presence in the networks.”

Another 6,000 miles later, after covering both east and west U.S. coastlines, he discovered that technology too was traveling fast. It was time to incorporate “warp drive.”

Today while gathering toys more in keeping with the age of ISDN and artificial or virtual reality, his latest technological camel, BEHEMOTH, is evolving even as you read this column.

BEHEMOTH is “an autonomous mobile information and communication platform, powered by the sun, propelled by human muscle, linked via satellite with global information networks.”

The result was a $178-an-ounce bike, almost $1 million in time, equipment and energy provided by 150 sponsors.

For what purpose? To show the meaning of information.

Roberts will be appearing regularly at schools to plant the seeds of the new age: that the obvious track in life is not the only route.

Roberts says it well: “Industry is requiring increasing specialization of its workers, due to the overwhelming amount of expert knowledge associated with every technology. This yields positive results but at a severe cost — specialists inevitably lose sight of the big picture.

“There is thus a growing market for people who travel continuously among specialists, cross-fertilizing at every stop. No trade journal or annual conference can accomplish as much as a renegade cadre of curious technoid generalists, on the loose in industry.”

Think not what this machine can do, imagine what it can’t.

Roberts has created his moving and profitable virtual reality. Can you?