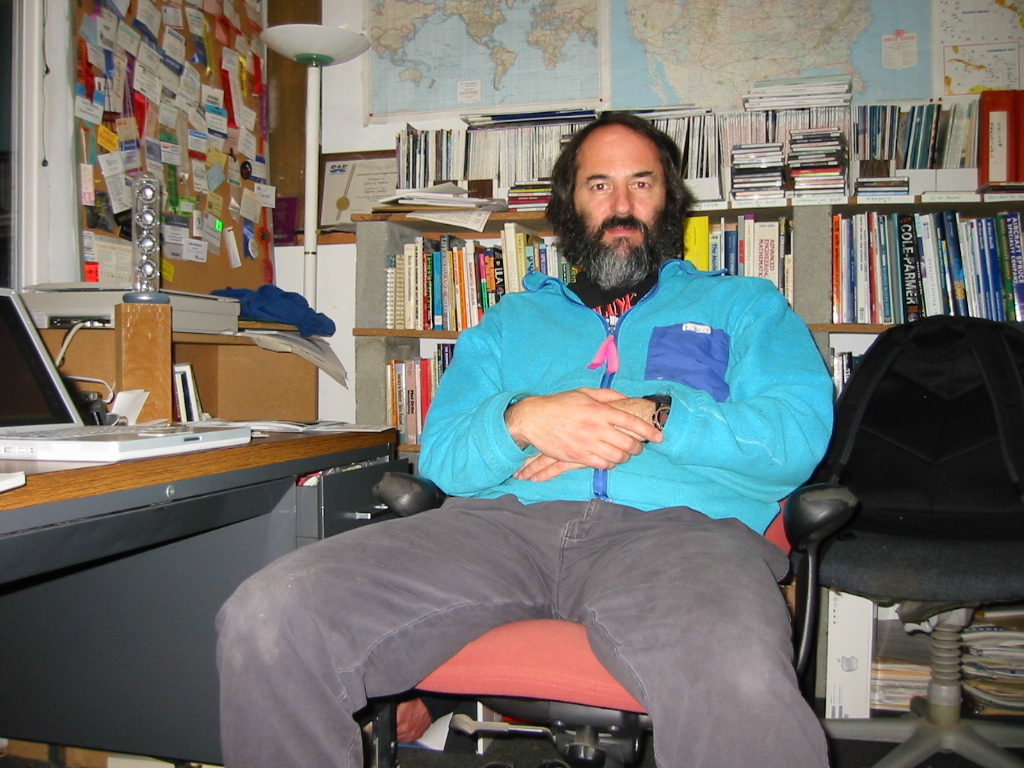 This just turned up during a 2018 search, and I remember it now… an email interview back around the latter phase of the Microship project. This captures a moment that is not otherwise well-documented, so with thanks to Sean Healy I am reproducing it here. The original is in the nettime mailing list archives.

By way of introduction, Sean writes:

Beyond ants born on a merry-go-round, beyond yourself being born on the back of a galloping horse, lies the question of whether you choose to be born — or if it just happens to you. Not sure which side of that fence long-time pedaler and tech-nomad Steven Roberts sits. As you can see at microship.com, he’s certainly mobile though.

How hard was your transition to becoming nomadic?

Pretty easy; Central Ohio inspires long-distance travel. As this coincided with my somewhat antisocial desire to combine all my passions into a lifestyle (which can be a bit rough on relationships), the pre-launch phase was 6 months of exuberant stress. Departure was something of a relief, and since I actually moved to the bicycle, there was no easy way to quit when my knees hurt. After a while, the road became home… or, more accurately, the Network did, and I spent my time wandering around my huge neighborhood, dropping in on friends.

Why did u choose a recumbent bicycle, instead of say a skateboard?

What are some of the benefits / pitfalls of being a tech-nomad?

Well, when you’re a technomad, your physical location is irrelevant. These days, that’s a pretty easy concept to grasp, since a growing percentage of the population more or less “lives” online anyway, but back then it was a bit of a shock to people. A technomadic lifestyle is immensely liberating, of course, though it’s hard to accumulate vast quantities of stuff.

Presume u must meet many online friends while traveling. Do many of them join you for a while on the road?

In the bike era, it seemed to be a sort of all-or-none situation: I did the first 10,000 miles solo (with occasional friends joining me for a day or two). The next 6,000 was with a girlfriend, then the last little trip with BEHEMOTH was more or less solo but for an unforgettable on-the-road 3-week romance. I am approaching the Microship project quite differently. Two boats (canoe-based amphibian pedal/solar/sail micro-trimarans) are under development here in the lab, but the plan is to travel as a technomadic flotilla of 4-8 travelers, with other nomads joining the group for varying periods over the 2+ year expedition. We are building the wireless network and other toolsets to accommodate a variable number of participants in the community.

Strangest encounter u’v had on the road / waters?

Why a solar powered linux server on a boat?

Well, how else would I manage pier-to-pier networking? Solar because I don’t have a big diesel engine to crank up whenever I need power, and Linux because it’s wonderful what you can do with commodity hardware when you install a decent operating system. Besides, the open source community is a rich resource of clever people who like to build interesting tools. (My personal productivity machine is a Macintosh 14″ iBook running OS X.)

What sort of environmental data-collection are you doing in your expedition around North American waterways?

I’m collecting dozens of time- and location-stamped telemetry channels, streaming them to a publicly accessible server, and publishing all the tools and protocols with the hope of inducing other travelers to do likewise. Some of this is purely pragmatic (system diagnostics and the like), but the real goal is creating a huge amorphous archive of environmental data. Think of it as corporate urinalysis. In the current political climate, it’s more important than ever for us to use our technology to expose environmental abuses and keep people suspicious. That’s not the central theme of the expedition, though: I’m actually doing this for fun.

How nomadic was your partner b4 u coaxed her to join u travelling?

Well, the partner you are probably referring to split in December… a 10-year development project is rough on relationships. There is a position vacant…

What would bring u back to the city?

Hmmmm. Free symmetrical broadband? A geek commune? Actually, it would be very hard to get me back to the city… my development lab is on a forested island in Puget Sound, and I only make it to Seattle about twice a year. I like calm places, one of the reasons I’ve migrated from road to water.

The best 3 pieces of hard earned advice you’d give someone wanting to become a pedaling nomad?

I’m currently working on a book about the Microship project for O’Reilly & Associates, and expect to launch the expedition in the Spring of 2003. I welcome flotilla participants, project volunteers, and other input…

Posted in Media - Microship and tagged nettime
← WANDER: A Portable Linux Data-Collection SystemBEHEMOTH in Ripley’s Believe it or Not! →