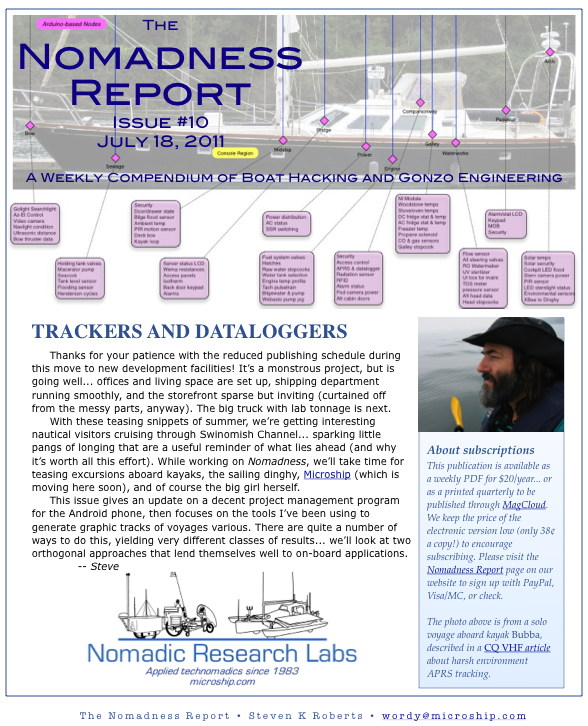 Thanks for your patience with the reduced publishing schedule during this move to new development facilities! It’s a monstrous project, but is going well… offices and living space are set up, shipping department running smoothly, and the storefront sparse but inviting (curtained off from the messy parts, anyway). The big truck with lab tonnage is next.

With these teasing snippets of summer, we’re getting interesting nautical visitors cruising through Swinomish Channel… sparking little pangs of longing that are a useful reminder of what lies ahead (and why it’s worth all this effort). While working on Nomadness, we’ll take time for teasing excursions aboard kayaks, the sailing dinghy, Microship (which is moving here soon), and of course the big girl herself.

This issue focuses on the tools I’ve been using to generate graphic tracks of voyages various. There are quite a number of ways to do this, yielding very different classes of results… we’ll look at two orthogonal approaches that lend themselves well to on-board applications.

I am frequently asked about the tools I use to create the Nomadness track images in blog posts, and there are enough different ways to do this that the subject can be a little confusing.

The most accessible method these days, of course, is to just run an app on your iOS or Android phone… but this doesn’t scale well for extended voyaging (eats batteries, exposes your communication lifeline to the elements, gets in the way of other uses, requires server support for graphics, etc). So let’s not do that.

Another common method uses your nav software (whether on a computer, or baked in to a dedicated chartplotter) to save track logs. MacENC does this very neatly, exporting KML files that play nice on Google Earth; I have not tried it with appliance chartplotters.

In this article, however, I want to talk about two other methods… each very different from the above and each other. The first is a dedicated datalogger that stores a GPS position in an SD card at any specified interval (I do it every second), yielding a massive text file that can then be used to create overlays on Google Earth like the image below. With such resolution, these allow you to zoom deep into an interesting detail like a sloppy docking maneuver or tricky series of tacks. I’ll show a few examples, including a couple of rather embarrassing ones.

The other method transmits location “packets” in real time via amateur radio, using a protocol called APRS. If your adventure is highly public, or you have friends and family watching over your shoulder, this might be preferable. It lacks the close-up resolution of the datalogger, but appears live on various websites around the Net… making it easy to capture an image like the one below (this is from aprs.fi using Google maps, though findu.com is the original; both links go directly to my own position). The red dots are actual position reports, and materialize on the map as they are received. This is most entertaining while sailing, with friends commenting on live position and Facebook updates.

You can do this with SPOT, but updates are infrequent. You can also build a track with AIS over marine VHF, though I’m not sure about extracting detailed logs from the client software (I haven’t tried). AIS channels can get very congested in busy shipping areas; I’m a believer in the technology for safety reasons, but I would not want to depend on it for the kinds of applications discussed here.

Let’s start with the dataloggers…

Back in 2003, as I was making local kayaking jaunts in Bubba, I was fond of manually creating “maplets” that ended up collected on my website. This was a bit labor-intensive, but I came to appreciate the value of archiving one’s adventures in graphic form.

Soon, folks were starting to make little circuit boards with an embedded GPS, an SD card socket, and a microprocessor that records the location at specified intervals. I bought one of these from the good folks at Sparkfun, and packaged it in a carved foam insert tucked into a SealLine Electronic Case.

The antenna is lost in the glare; below that is the board, which carries a Lassen iQ GPS, an LPC2138 ARM processor, and a socket on the back for the SD card. The software strips the NMEA sentences to just the basics, and stuffs them into the card.

The resulting file is vanilla, and doesn’t work on Google Earth. In the Olden Days, I had to manually paste the data points into an XML-like file with appropriate headers and footers, but now there is an easier way… just hand it to the online GPS Visualizer tool. Instant track overlay! Here I am, calibrating my Rate Gyro compass:

(This is a fun one. The task was to do three full 360° loops while the Maretron unit was in learn mode. What I didn’t know is that there was current running in Drayton Passage.)

I still use this little datalogger, though of course there are newer models available. One called the Geochron Blue (also from Sparkfun) has an appealing feature set including internal LiPoly battery, Bluetooth connectivity to a nearby computer, and a variety of useful operating modes.

With a 1 GB card, it’s good for about 9.6 months of continuous logging at one data point per second, which should be plenty since the normal mode is to turn it on only when underway (creating a new file in the process). The unit can be left sealed in some sky-visible spot, permanently powered via a switch below, wirelessly feeding track files to your laptop on request.

I mentioned having a couple of embarrassing files to share. The full 2008 inaugural cruise of Nomadness is visible in this image (click to embiggen). But if you were to zoom into the original with Google Earth, you’d find my first attempt to dock 18 tons of angry steel in a stiff sidewind, making the slip on F Dock at Oak Harbor Marina look very skinny indeed:

When I look at it, I wince at the memory of getting blown off on three successive attempts… finally taking a big run outside and a long straight approach.

The other has its own story along with a deceptively simple track image. <sigh> A close call, that one.

This whole approach to recording your travels is a bit geeky compared to some of the alternatives mentioned on the previous page, but the ability to drill down into the details is very useful… and at times, funny. I’ll leave the subject with this image of my “holding pattern” while awaiting moorage in Pender Harbour…

Dataloggers may offer high-resolution track information, but I’ve had much more fun with APRS… an amateur radio toolset that lets me transmit a position packet (sometimes called a “posit”) every minute or so, which is appended to a visible track overlaid on Google maps.

The image below (by Lynn Deffenbaugh, KJ4ERJ) should help visualize how this works. The track itself is that black squiggle in the northwest quadrant of the San Juan archipelago. To most folks viewing the boat’s progress, only this would be visible (with a zoomable backdrop of satellite imagery).

The straight red lines show the paths that my transmitted signals took. Every 90 seconds, my tracker beaconed the current GPS location, but many times the signal fell on deaf ears since it’s open-loop and not based on establishing a connection. Often enough, however, it would get picked up by a fellow ham’s APRS station and forwarded to others… or directly to an “I-Gate” or Internet Gateway. (The image shows the first hop in red, with additional traffic paths in green.) Even though my tracker was only running .5 watt transmit power to a little quarter-wave whip antenna on the deck, it covered considerable ground to high-profile stations in Canada.

It’s important to note that this does not require an Internet connection… at least until the I-Gate slurps all the radio traffic and forwards it to distant servers. A large part of the APRS community runs software that talks directly to the radio and displays positions on locally generated maps.

To the rest of the world (like your friends and family, who don’t have to be ham radio operators to enjoy this technology), the view looks like the image below… which includes the segment we saw earlier along with the next couple of days as Nomadness made the trek into Canada and on to the delightful Ganges Harbour on Salt Spring Island.

In addition to making your desk-bound friends envious, this adds an entertaining cultural layer to an on-water adventure. Most APRS users are in cars, so a meandering track through interesting waters tends to capture a lot of eyeballs. I’ve had folks email me to say they have a window up on their desktop at work, displaying my slow progress through beautiful island groups overlaid on Google satellite imagery. I’ve also had people waiting for me at a harbor (or even waiving from a beach), just popping by to say hello after watching the approach. I suppose one might fret about the security implications, but I’ve never had a problem… though if it were required by law I would be fighting it with vigor!

Let’s take a look at the hardware needed to accomplish this.

There are a couple of ways to do this. The traditional approach uses a fully capable ham radio along with a terminal node controller (TNC) with attached GPS. The rig listens on the APRS frequency (typically 144.39 MHz) and at a clear moment transmits a packet with embedded location data and optional telemetry. This is fairly hardware-intensive, as you can see in the photo below; this rig is currently in my truck, and accompanied me on the Bubba kayak adventures.

The bottom unit is a 25-watt Yaesu 290 multimode 2-meter transceiver, with a Kantronics KPC 3+ stacked on top and cabled to the mic, speaker, and PTT ports of the radio. A Garmin GPS-35 is velcro’d to that, along with a USB-serial interface and power switch. This is a very effective tracker that has covered a lot of miles with me, but it’s too much to tuck into a nacelle and think of as a black box. On the other hand, it offers the flexibility of normal packet operation; all I have to do is plug in a laptop and I can connect to the somewhat dormant  (but cool) radio-based network, useful as a backup for data comms in the field as well as an interesting segment of ham radio culture.

The tracker on Nomadness takes a much different approach.  Based on the Open Tracker 1+ platform, this little 2×3-inch box connects to 12-volt power as well as VHF and GPS antennas… and then, based on initial setup via an external PC, transmits position reports at the specified interval. Like other basic trackers, it does not by default listen on the channel first (a topic of some argument in the APRS community, though that function is possible with an added receiver).

The beauty of this is that it’s small and low power (only 40 mA standby, and 350 mA during brief transmit bursts with 5 watts into the antenna). Standard frequency is 144.39 MHz, but they can work anywhere in the 2-meter band.

Now, back to moving! I’m looking forward to getting settled and into full-time nautical geekery…