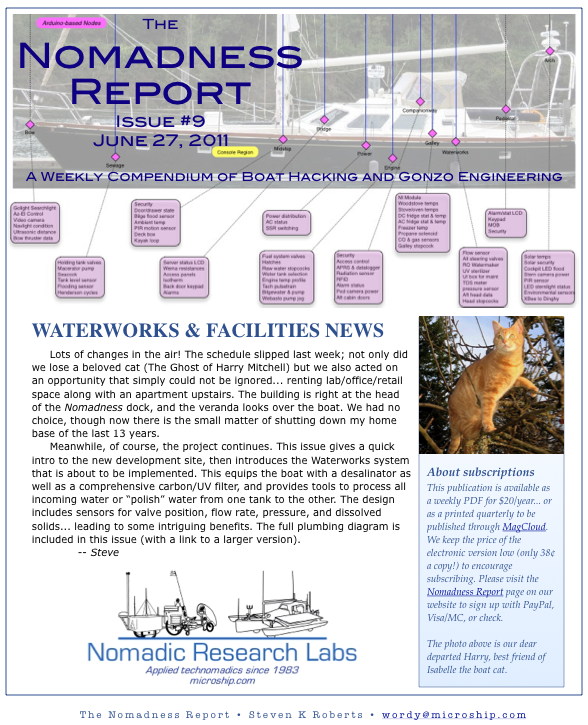 Lots of changes in the air! The schedule slipped last week; not only did we lose a beloved cat (The Ghost of Harry Mitchell) but we also acted on an opportunity that simply could not be ignored… renting lab/office/retail space along with an apartment upstairs. The building is right at the head of the Nomadness dock, and the veranda looks over the boat. We had no choice, though now there is the small matter of shutting down my home base of the last 13 years.

Meanwhile, of course, the project continues. This issue gives a quick intro to the new development site, then introduces the Waterworks system that is about to be implemented. This equips the boat with a desalinator as well as a comprehensive carbon/UV filter, and provides tools to process all incoming water or “polish” water from one tank to the other. The design includes sensors for valve position, flow rate, pressure, and dissolved solids… leading to some intriguing benefits. The full plumbing diagram is included in this issue.

All Together at Last

Way back in Issue #1, I introduced the new facilities for the Nomadness project: mobile lab, small “retail office” space, and boat moorage all in the same small town. I still had the bulk of my tonnage in the 3000 square-foot Microship lab on Camano Island, and my partner has been living in the house there with occasional visits back and forth.

The huge news this week is that we have rented a building right at the head of the dock… an apartment with veranda upstairs and 2,000 square feet of workspace on the ground floor. With a few adjustments and some creative arranging, this is enough space to receive the complete contents of the old facilities, and the move has already begun!

In the photo above, the building is just behind the boom… and the late-night view from the open park at the edge of town is below. I’m keeping the mobile lab for dirty work, but will move everything else here including offices, nickel-generators, retail storefront, development lab, shipping, staging area, inventory of stuff that needs to go away, ham gear, music studio, boat provisioning, housing, and more. Crazy.

Meanwhile, I’m looking for a renter for the 4K square feet of shop and house in the woods of Camano Island. Need to build a boat or start a company? <grin>

The move will disrupt my already variable posting schedule, but your subscription is for a number of issues, not calendar year… and the new dev site is perfect so we had no choice. No more excuses for not making progress!

I didn’t really expect that phrase to fall out of this project, but there it is.

At first, I was just looking at a few simple upgrades from the fresh-water system that came with the boat: toss the vintage watermaker and put in a new one, add some filtration, improve service access, and so on. Inevitably, I started contemplating interesting combinations of the available resources (like being able to filter water from one tank to the other), then sketched the associated data collection and discovered some serious added value from a network node. Hm… this actually looks fun.

Fresh water is a huge part of a voyaging boat, of course; it is a core component in the suite of self-sufficiency tools. Nomadness carries 90 gallons, split into two tanks, along with a water heater (Isotemp), pressure pump with accumulator, and distribution to the heads, galley, cockpit shower, inside shower stall, and laundry. A good start.

The gadget in the photo below is an integrated filter system that should make short work of unwelcome biology, chemicals, and particulate matter. Water enters the housing on the left, which prefilters it down to 5 micron chunky stuff, then passes through the one on the right for .5 micron carbon treatment. This takes care of nasties like giardia cysts, chlorine, and very fine sediment.

It then passes up and back to the left through the ultraviolet chamber, killing off bacteria, viruses, yeast, mold, and algae.

The next item is a svelte little reverse-osmosis desalinator, which pumps seawater at 800 PSI through a membrane to extract clean drinking water. This one is small, as such things go… drawing only 4 amps to produce 1.5 gallons per hour. When operating on a sunny day, that is about 10% of the solar power budget (the array is 420 watts).

If something catastrophic happens, the motor can easily be removed and replaced by a handle that lives in a clip next to the unit. A human pumping steadily can generate over a gallon per hour of lifesaving drinking water while bobbing around in the middle of the ocean.

As I started looking at the system integration, some interesting capabilities started to emerge.

The section within the dotted box is all being mounted together on the forward wall of the aft head compartment; those green balls are just there to highlight the “I/O” from this region and are not physical objects. The blue balls represent sensors that will be detailed in the associated node drawing, and the red balls are manual valves with magnetic position sensors. Click to embiggen…

The two 45-gallon tanks are at the bottom along with existing plumbing for deck fills and source selection. The only current method for determining water level is a Tank Tender (a classic and reliable non-electronic device that displays the pressure required to manually pump air from the bottom of a selected tank, a direct function of the column height.) This information is not available to the server, so I’ve been wanting electronic monitors… but getting to the tanks to install them would be a nightmare as they were buried by a 2002 refit. A future serviceability issue, that.

At the top of the drawing is a simplified sketch of the distribution around the boat, and in the upper-left corner is a shore water connection. People argue endlessly about the advisability of this, since a leak aboard has been known to sink the occasional boat at the dock (presumably those with inadequate bilge pumps, no alarms, and no attempt to limit the flow rate). This will have a shore water connection, with internal and external shut-off valves, a pressure/flow regulator, and a place on the “post-flight checklist.”

Here’s where it gets fun. I can choose between the internal pressure water system or the shore water supply (with a mechanical interlock, not shown), then pass that through the string of sensors and the filter before it is routed to domestic distribution… along with that little row of four valves.

These determine which tank gets the filtered water (which could have come from a tank)… or fresh water from the desalinator. It’s really simple, but I’ve never seen a similar setup on another boat; tank water can be cleaned and returned to either tank, shore water can be properly processed before being stored, and sea water can be directed to a suitable destination after a small buffer tank for quality testing.

We could simply call this done (once it’s actually built, of course!), but some additional capabilities become available with the addition of a local microcontroller.

If you’ve ever seen an industrial control environment, you might have noticed screens that show a live display of a process… graphic representations of valve positions, tank levels, temperatures, and so on. This may seem like overkill on a sailboat, but there are a number of areas, like this, where it is easy to imagine getting confused… once plumbed, things rarely look as clear as they do in the drawing. The photo on this page, in fact, includes that little cluster of four valves in the middle of the big drawing (just laid out on the workbench; this is not yet installed).

While I would be wary of automating this with solenoid valves (I really don’t trust computers that much), it’s not hard to pick off their position with an input bit and use that to change line colors on an associated image presented in a browser. Looking at the system schematic with inactive connections grayed out and others bright green would go a long way toward reminding a tired human about how the whole lash-up works.

That gets even better if we incorporate flow measurement. Using a flow sensor at the “choke point” to the left of the filter in the schematic, we suddenly have the tools to integrate water usage (or fill-up), with a local display showing tank level percentage both graphically and numerically. Also, since the system will know where all the flow is happening, it becomes easy to keep track of filter media life and pop up an alert if it’s getting to be time to do some maintenance.

My first experiments with the valve position sensors simply used tiny neodymium disc magnets glued to the handle and a reed switch glued to the body. This worked fine on the bench with a wood mockup for code testing, but really gets messy on the PVC valves shown here (not only tricky adhesives, but long fragile glass reed switches that don’t tuck nicely into place). A better solution is an integrated Hall-effect sensor such as the US1881 (about a buck apiece) that can be encapsulated in a little blob of goo. I’ll report after testing…

This whole system is happening in parallel with the new power distribution system, another in the daunting category of infrastructure projects that need to be done before attention can turn completely to more enchanting gizmology. Fortunately, there is nothing keeping us from making this part fun as well… with networked hooks for future data collection and system integration, and added capabilities that would be impossible with off-the-shelf marine chandlery hardware.

There will be a few short issues of this report, with somewhat asynchronous timing, until we get moved into our new facilities in La Conner. 4000 square feet is compressing into 3000, Microship is going in the water behind Nomadness, offices are moving, retail space being set up, and more. It’s completely daunting… and ‘tis the season for sailing so it’s a little maddening as well! This will pay off in the long run, but is a massive undertaking for two overloaded humans.

Still, I’ll be taking a couple of days a week to focus on design issues and chip away at the project lists, so there will be fresh content even during the move.

Painting below by Aleks Kargopoltsev, spotted unexpectedly today in La Conner… Nomadness is at left.