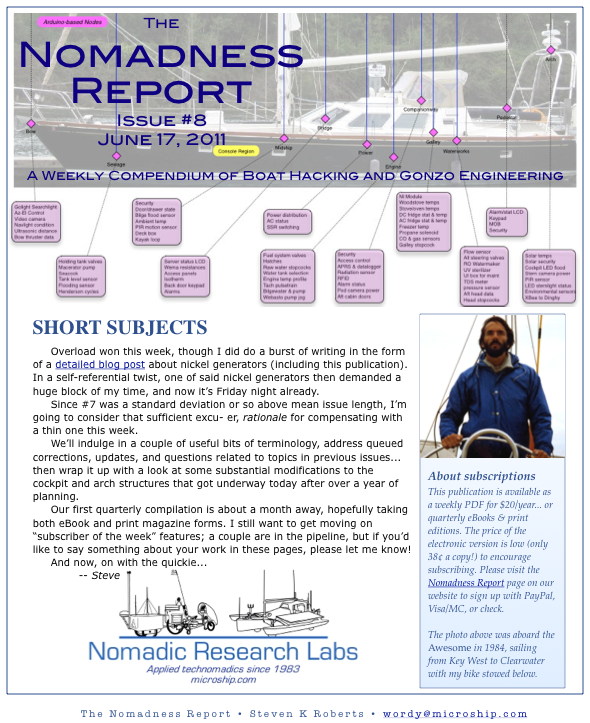 Overload won this week, though I did do a burst of writing in the form of a detailed blog post about nickel generators (including this publication). In a self-referential twist, one of said nickel generators then demanded a huge block of my time, and now it’s Friday night already.

Since #7 was a standard deviation or so above mean issue length, I’m going to consider that sufficient excu- er, rationale for compensating with a thin one this week.

We’ll indulge in a couple of useful bits of terminology, address queued corrections, updates, and questions related to topics in previous issues… then wrap it up with a look at some substantial modifications to the cockpit and arch structures that got underway today after over a year of planning.

This is such a universally useful concept, inevitably appearing in future issues of this publication, that I need to ensure it’s part of our shared lingo.

Wiktionary offers this etymology: “probably coined by Carlin Vieri in his time at the MIT AI Lab (1993-8), based on an episode of The Ren and Stimpy Show.” Basically, it refers to the all-too-common scenario of trying to solve a problem, which requires you to solve another problem, which can’t be solved until you solve another problem… and so on, sometimes with such deep recursion that you forget the original problem.

My minor incidence of it today was needing to clear the arch in anticipation of a meeting with Rick Wesley (stainless welding guru), requiring me to lower Nomadling… which was difficult due to corrosion on one of the stainless ratchet straps. I lubed that, but launching the dink was then annoying since one of the Dinghy Dogs has a slow leak and hung in the water, so I tied it to the dock and started to pump it up… revealing a split in the hose associated with the cheap foot pump, prompting me to replace a sloppy repair job that I had done earlier with the butt end of a roll of tape. I chased down some fresh Rescue Tape, did the fix, pumped it up, and went back to preparing the arch region for solar panel measurements.

This isn’t the best example, since the side trip wasn’t truly in the critical path to the central task, but it’s fairly typical of a day working around boats (or computers, or network administration, or microprocessor design… or anything, really).

If you Google “yak shaving,” you’ll find this entry from Seth Godin’s blog and another by Joi Ito. It’s a handy term to keep around.

In Issue 6, in the article about mounting curtains with neodymium magnets, I mentioned .75” diameter double-stick foam tape. I indicated that it was not ideal for stepped surfaces, and would now like to add that it is completely useless in this environment… the heat of a sunny day softens the adhesive. Not recommended.

In response to the special issue on the Polaris mobile lab (Issue #5), a couple of folks mentioned an alternative to the flimsy Melamine “Shower Board” that I used. It’s called IdeaPaint, and converts any surface into a dry erase board. I have not tried this, but will definitely do so the next time I find myself creating workspace (maybe even aboard, if there’s a large enough blank surface in the lab region).

Issue #5 generated quite a bit of interest, and not surprisingly a few follow-up questions. Here are some from Steve Stroh:

Do you leave it on wheels during extended parking sessions, or do you have jacks?

There are two struts that swing down from the stern, coarsely positioned by pins and external wood pads. I then crank the tongue jack to the point that these take a good bit of load, putting the whole thing on a tripod and making it less wobbly as I move around.

How much did it end up weighing?

I forgot to check, although a little back-and-forth with my Sherline Trailer Scale should give a reasonable approximation.

Can the generator power all the shop tools (one at a time, obviously), or do you require shore power for anything heavy duty like a table saw?

I’ve been pleasantly surprised by the generator, which I’ve tested with table saw and drill press under load, as well as the air compressor. The system was designed to use 30A shore power, though at the moment the building it’s in only has 15. It hasn’t been a problem.

What was the provision for keeping the sawdust out of the microscope (kind of a big deal for SMT work)?

The microscope is always under a dust cover, and the plan (not yet implemented, but accommodated in the design) is a dust curtain between the power tool zone and the workbenches.

Have you done any work on the roof – antennas, etc.?

Only a dual-band (VHF/UHF) Larson antenna for the Icom 706mkIIG ham rig:

You mentioned that the batteries lived in the steel cabinets at the bow. Details? Venting?

At the moment, there are are just two of the AGM marine batteries that I pulled out of the boat, and they are not significantly vented beyond random holes in the steel cabinet. They’re not in great shape, but are adequate for now.

In Issue #5, I mentioned shipping containers, which are a remarkably cheap way to acquire high-quality secure enclosed space (albeit ugly, from some folks’ perspectives).

Also, this topic came up on Cruisers Forum recently: how do you do dockside work on your boat? This covers a wide range, of course, but I mentioned having a mobile lab parked nearby and this sparked a few responses that have encouraged me to plan a follow-up article featuring other peoples’s rigs.

If you have a mobile shop or other rolling workspace and would like to be part of this, please let me know!

While we’re on follow-ups to items in previous issues, I want to mention that my graphic project-management outlines turned out to be more trouble than they were worth. While they definitely look cool and are fun to color, they offer no space for notes or embedded to-do lists… and they’re a pain to edit. This is the sort of thing that would be perfect as a planning tool in a corporate environment, but not an agile management tool for a boat project.

My default was Scrivener, which I love for lots of reasons, but it’s still tied to a computer and I’m moving constantly between boat, office, lab, shop, and home base.

I mentioned the meeting with my stainless welding guru today… this is the initiation of a long-awaited and rather huge modification to the boat. That arch on the stern is about to get a 420-watt solar array, split into two segments.

Aft, hinged and fixtured over the dinghy davits, is 240 watts (about 4×7 feet). I’ll be able to fold the davits and drop the panel to reduce overall length when needed, and a moat around the perimeter will allow rainwater catchment.

180 watts extends forward, stopping just short of the boom and providing the roof of a cockpit enclosure (something that can vastly extend the livability of a boat in Northwest weather). This array includes a perimeter structure designed to support antennas, with cable raceways integrated into the arch and related structures.

None of this is quite optimal (nothing is); there will be partial shading from the radar, but there’s enough overdesign (not to mention MPPT-tracking charge controllers) to make the best of the situation. The modules themselves are left-overs from the Microship epoch… 30-watt Solarex Ultralite units without any metal backing. At the time, I thought this was a good idea, and we laminated them onto custom folding foam-core substrates. But that was a huge design error; they got way too hot.

Here, the modules will be on sheet stainless, and I’m delighted to see them at last get put to use!

The other part of this upgrade will replace the existing fabric of the dodger with 16 gauge sheet stainless. This will support more antennas, as well as lighting, instrumentation, video, and a solar water heater to be integrated with the heat exchanger in the Isotemp (intended for engine coolant, but I don’t trust that). The original fabric is a beautiful piece of work by Artful Dodger, but it’s getting tired and the steel will fit the aesthetic of this boat more than a sewn replacement.

The front windows will become rigid polycarbonate instead of the typical fragile dodger vinyl… with the center segment able to open.

Other cockpit work includes a desperately needed helm seat, a pod for instruments at the steering pedestal, LED floodlights and video cameras, and a thicket of antennas… she might look a bit geeky.