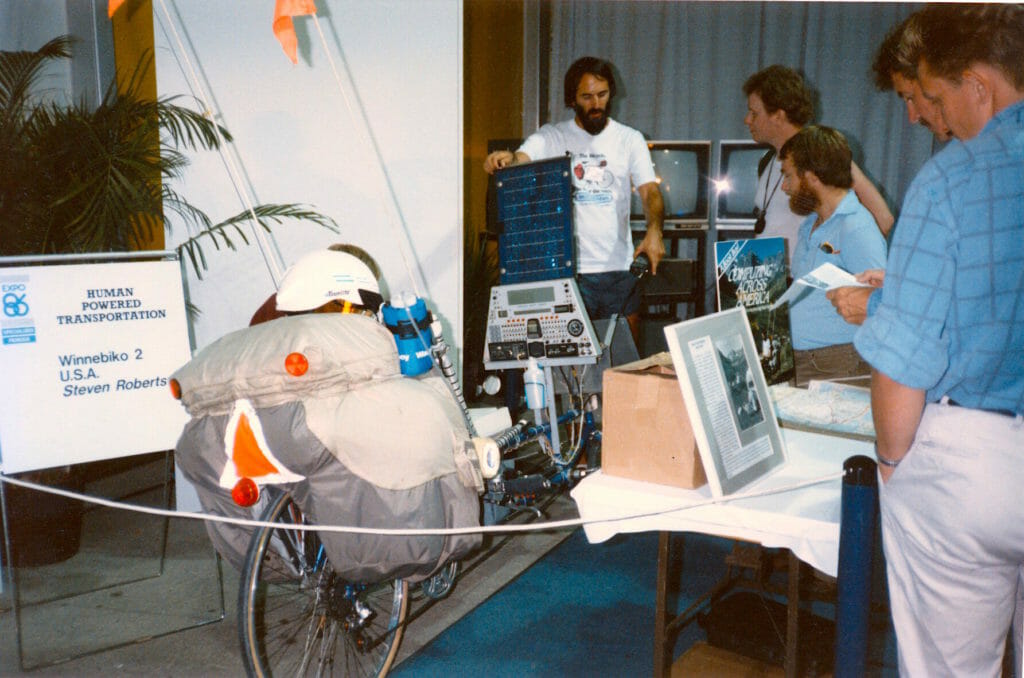 Hello from Puget Sound! For a place so close to Metropolis, this wooded island is about as calm as can be imagined: the ferry to Seattle may just as well be transoceanic. People around here amble; they move slowly and stop to watch the sunset. A New Age coffee shop called Pegasus offers classical music and interesting reading materials to go with its fresh Costa Rican. The Streamliner Diner conjures robust spicy omelets of fresh veggies, and days in the fern-carpeted forest become nights, and then days again. Mañana outside the Caribbean? Haven’t been this relaxed since Key West.

The setting is appropriate. This is the month of final preparations (always more final preparations, eh?), a time of wiring and debugging, programming and tweaking. We came to the island in our well-traveled van, ready to move once and for all to the bikes and head south properly — under our own power.

Much has happened in the weeks since my Granby, Colorado update. We glided west, too smoothly, joining the throng of lumbering campers fouling the beauty of Yellowstone and motoring on — over mountains, deserts, farmlands, wastelands. The scenery passed as video, stripped of smell and texture by our metal cocoon. By the time we rolled into Vancouver, I was so sick of the van I was ready to dump it in the ocean.

We spent a week in that town — doing Expo to the point of exhaustion. The motive, of course, was not to gawk; this is not one of those dutiful pilgrimages of what Edward Abbey calls industrial tourism. It was a chance to display the Winnebiko in the energetic company of over 150 other bizarre vehicles… and, more importantly, their creators.

There are a lot of strange ways to put together wheels, pedals, and a seat. High-speed humans zipped around town all week, grinning back at the gaggle of confused touroids stopped in their tracks by the weirdness. David Berkstresser on his sprightly Vacuum; the Swiss team in their flawless Trivia; the tattooed punk smoking cigars inside a full fairing; the Humboldt County blondes laughing in their kinetic sculpture dubbed the Bionic Taco. All shared the delight of invention and speed — the week was a celebration of creativity. This is the essence of competition: not muscle against muscle inside the conceptual straitjacket of traditional bicycle racing, but brain against brain, concept against concept, human against human. Cortex and quadriceps alike were involved here, and the atmosphere was electric.

Of course, Expo went on in the background, a mass of roiling humanity, bright color, street music, pavilions ranging from the deeply philosophical to the blatantly commercial, and overpriced food. Curious behavior emerges in a place like this: in our “scoring” culture, numbers are more in demand than experience. Tourists gripped their “passports,” queuing impatiently to have them stamped at every attraction, seemingly more interested in the trophy than the game itself (sometimes sneaking in the back door of a pavilion just for the stamp, or, eventually, buying fully-populated ones in the gift shop). Public address systems directed the masses, food smells tickled the nose, groups of Japanese tourists stopped randomly to photograph each other, and the scream-punctuated whooshes of rides were ever-present in this state-fair-turned-city. But here and there were pockets of brilliance — the roller-skating khaen-player who travels the world to learn native instruments, the Spirit Lodge of GM, the videography behind Discover BC, the nonverbal message in the movie Rainbow War, the occasional spark in an eye in the crowd. Always from the mundane emerges magic, if you’re willing to wait long enough.

We left with relief, fleeing to the unselfconsciously picturesque town of Victoria for a few days, wondering soon if the journey would become a succession of painful good-byes. New friends already, and we don’t even live on the bikes yet… but it won’t be long.

A strange phenomenon is the border: any border, from county to country. If you view the world from an incoming starship, the imaginary lines separating kingdoms are of no interest — there’s one species down there, citizens of one planet. It was with this attitude that I approached US Customs, mildly annoyed at the delay and thinking it no more meaningful than waiting for a driver’s license renewal. But the scowling agent squinted past me into the van’s cluttered cargo bay.

“The usual. Computers and so on.” I grinned at him, with no effect.

“I need to see some registration.”

“Around here you do.”

“How would you like to have that thing impounded until you can come up with some proof that it came from the US? Would you like that?”

The agent, in his grim way, was obviously enjoying this. Before I could answer, he told me to pull around to the office. Within minutes, the chief came out, nodding seriously at the explanation given by my tormentor.

“It’s a bicycle,” I told him, feeling that quaver in my gut that comes from total powerlessness in the face of ignorance. I handed him a flyer for the Computing Across America book.

“Look,” he said, jabbing a tobacco-stained finger into my electronics package. “Half that junk in there comes from Korea. You can’t import electronic equipment without paying duty — with no documentation, we lock it up. Just like that. If you really took it to Canada, you would have declared it at the border.”

This was news to me. The Canadian agent had simply smiled, asked how long I’d be in Canada and if I was carrying fresh produce, then waved me on.

Finally, of course, we managed to convince him—with armloads of photos and media coverage — that we weren’t smuggling high-tech contraband over the border. But my already negative opinion of governments dropped another notch, and the sudden tackiness of Port Angeles did little to dispel the shadows. Why didn’t we just stay in Victoria, a garden city of bakeries, bicycles and beaches?

But things always improve. Through that succession of chance encounters that inevitably results from wandering around in public on computerized, solarized, gizmologized recumbents, we ended up living in the Bainbridge Island woods atop a fully equipped machine shop. Ya just never know. The company is called Octo, and manufactures the Browning automatic bicycle transmission that allows riders to shift under full power. We’re engaged already in a bit of impromptu technology transfer, a barter of intellect, an arrangement that makes everybody happy. And, just like back in Ohio, I’m surrounded by a sea of parts and tools and cables and papers and databooks and…

Somewhere, very close now, is the road. The “day rides” around the island tease me — quick winks from the Other Woman, temptations of the spirit. I’m slipping into her arms, this time in a menage a trois: Maggie has recovered fully from surgery and yearns, as I do, for a life of total uncertainty — a life whose constancy lies in change.

Mutual tire itch, it seems, is even less curable than my old solo variety. Why stop when every new road is a beginning and home is right there by your side?