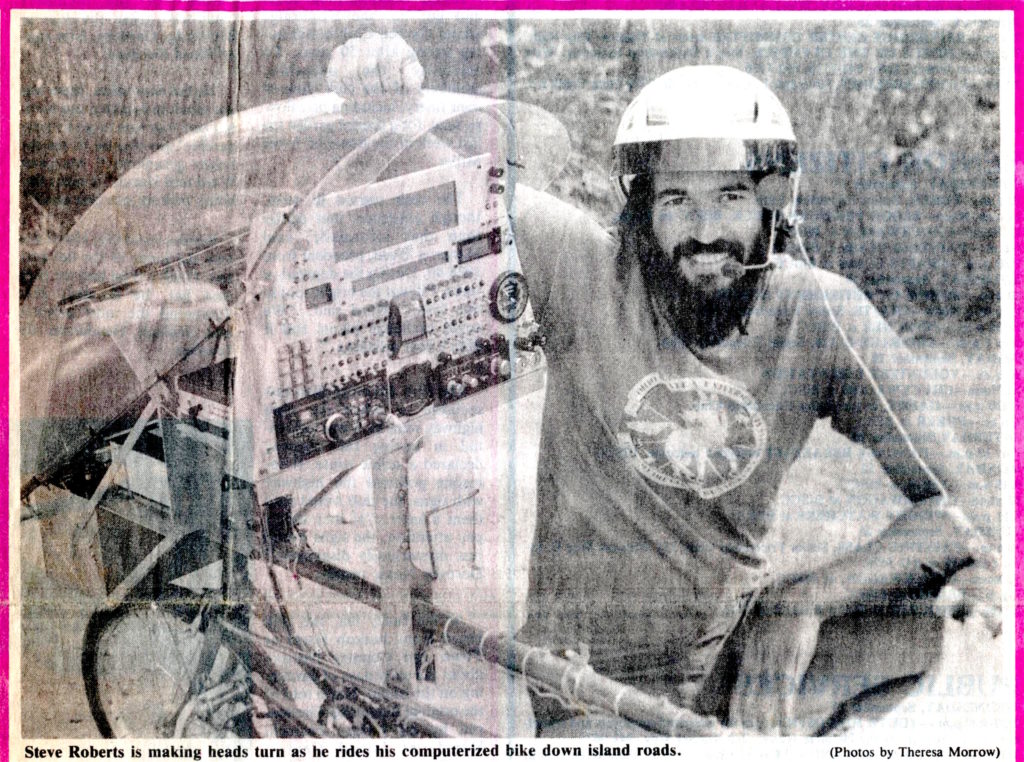 After an intense console fabrication project and frantic drive across the US to display the embryonic Winnebiko II at Expo 86 in Vancouver, we landed with new friends on Bainbridge Island for a little over a month and dove into a mad scramble of preparation to get ready to launch down the coast before winter… fabric side panels, 68HC11 console software, bike mechanical systems, fairing attachments, and more. My life was a blur, and this short post to my paleo-blog on GEnie gives a pretty good snapshot. I was 34, and having the time of my life. Somewhere in there, we found a free afternoon for this quick interview with the local paper (and a lot more happened before we escaped to begin the southbound trek):

“I rolled all my passions into one lifestyle,” Steven Roberts says when he describes life aboard his high-tech bicycle.

Roberts’s passions include computers, writing and bicycles — and he has combined them to create a bizarre “Winnebiko” that holds five computers and causes heads to turn wherever he goes.

Roberts has been on Bainbridge Island for the past week while he readies his eight-foot-long, 36-speed bike for a trek. The computer wizard has already completed a 10,000-mile trip from Ohio, through the south to California chronicled in a book called, “Computing Across America.”

Roberts describes his transformation from desk-bound computer expert to “journalist as news” this way: “Three years ago I was a freelance writer with a mortgage and overhead. I was chained to my desk.”

He sold his house, bought the bike and a portable computer so he could write on the road, and took off.

“But I was too tired to write after a day of meeting people, falling in love, climbing mountains,” he says.

He incorporated the computer into the bike so he could write as he rode: each handlebar holds four keys so that he types in binary code glancing at the text editor screen in front of him made from a Radio Shack computer.

In addition to the portable and the editor, he has a security system, a speech synthesis system, and a data communication system — all on his bike.

The security system will deter would-be thieves by talking to them if they touch the bike, at the same time beeping for Roberts. “Most people,” he says, “are intimidated by technology — if they aren’t, then they aren’t the type to steal.”

Roberts plans to program the bike to “do a monologue to explain itself” to curious onlookers with the speech synthesis system, and can communicate through a “bulletin-board” computer network as he moves with the data communication system.

The computers are powered by 8-amp-hour batteries charged by two solar panels on the front of the bike.

With all that high tech surrounding him. Roberts still depends on his legs to power him over mountains. The bike weighs 225 pounds “plus me.” It’s slow going, which suits him just fine.

“I make good time, with the emphasis on good,” Roberts explains. “If you get obsessed with where you’re going, you lose respect for where you are.”

The bike is perfect for a writer, because it is “a foolproof drawing card. It opens doors and give me an opportunity to pursue relationships. It’s not just a publicity stunt — I’m having a ball.”

Besides people he meets on the road, Roberts has an “electronic social life” through the Genie network where he talks to “amazing people” as he rides. These days he talks by radio to a partner, Maggie Victor, who also rides an “electronic cottage” and who will accompany Roberts on his trek to fill another book to be called “Computing Back Across America.”

The two are on the island for the next few weeks staying at Octo, a company that makes automatic bicycle transmissions.