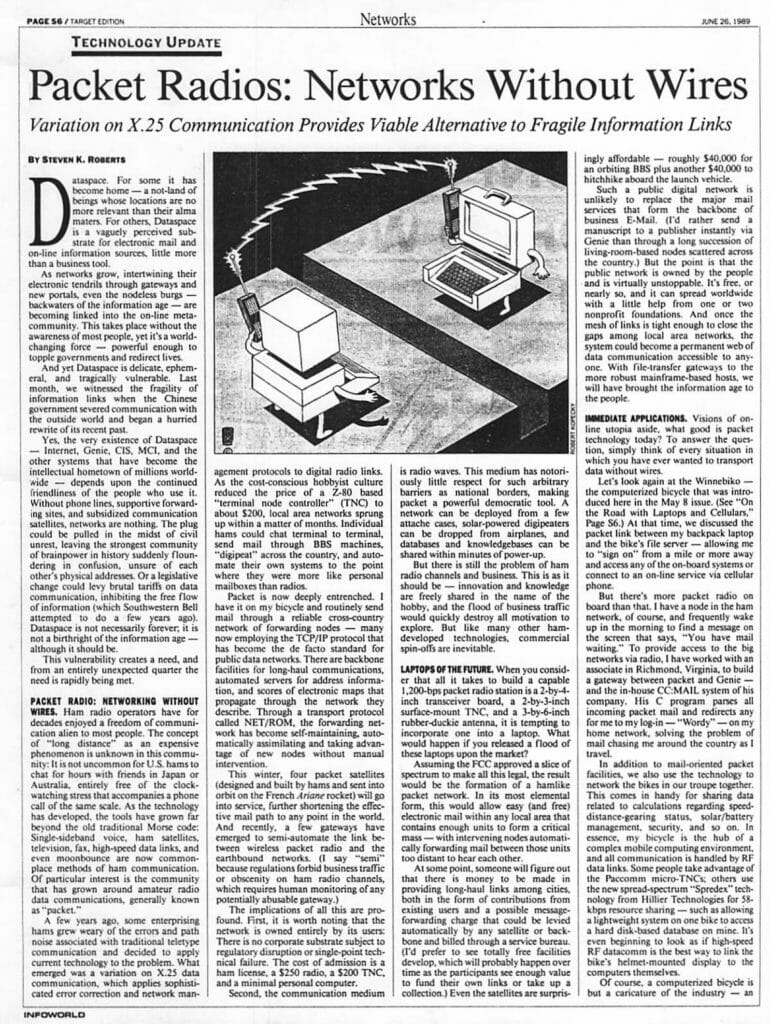 Dataspace. For some it has become home — a not-land of beings whose locations are no more relevant than their alma maters. For others, Dataspace is a vaguely perceived substrate for electronic mail and on-line information sources, little more than a business tool.

As networks grow, intertwining their electronic tendrils through gateways and new portals, even the nodeless burgs — backwaters of the information age — are becoming linked into the on-line meta-community. This takes place without the awareness of most people, yet it’s a world-changing force — powerful enough to topple governments and redirect lives.

And yet Dataspace is delicate, ephemeral, and tragically vulnerable. Last month, we witnessed the fragility of information links when the Chinese government severed communication with the outside world and began a hurried rewrite of its recent past.

Yes, the very existence of Dataspace — Internet, Genie, CIS, MCI, and the other systems that have become the intellectual hometown of millions worldwide — depends upon the continued friendliness of the people who use it. Without phone lines, supportive forwarding sites, and subsidized communication satellites, networks are nothing. The plug could be pulled in the midst of civil unrest, leaving the strongest community of brainpower in history suddenly floundering in confusion, unsure of each other’s physical addresses. Or a legislative change could levy brutal tariffs on data communication, inhibiting the free flow of information (which Southwestern Bell attempted to do a few years ago). Dataspace is not necessarily forever; it is not a birthright of the information age — although it should be.

This vulnerability creates a need, and from an entirely unexpected quarter the need is rapidly being met.

Ham radio operators have for decades enjoyed a freedom of communication alien to most people. The concept of “long distance” as an expensive phenomenon is unknown in this community: It is not uncommon for U.S. hams to chat for hours with friends in Japan or Australia, entirely free of the clock-watching stress that accompanies a phone call of the same scale. As the technology has developed, the tools have grown far beyond the old traditional Morse code: Single-sideband voice, ham satellites, television, fax, high-speed data links, and even moonbounce arc now commonplace methods of ham communication. Of particular interest is the community that has grown around amateur radio data communications, generally known as “packet.”

A few years ago, some enterprising hams grew weary of the errors and path noise associated with traditional teletype communication and decided to apply current technology to the problem. What emerged was a variation on X.25 data communication, which applies sophisticated error correction and network management protocols to digital radio links. As the cost-conscious hobbyist culture reduced the price of a Z-80 based “terminal node controller” (TNC) to about $200, local area networks sprung up within a matter of months. Individual hams could chat terminal to terminal, send mail through BBS machines, “digipeat” across the country, and automate their own systems to the point where they were more like personal mailboxes than radios.

Packet is now deeply entrenched. I have it on my bicycle and routinely send mail through a reliable cross-country network of forwarding nodes — many now employing the TCP/IP protocol that has become the de facto standard for public data networks. There are backbone facilities for long-haul communications, automated servers for address information, and scores of electronic maps that propagate through the network they describe. Through a transport protocol called NET/ROM, the forwarding network has become self-maintaining, automatically assimilating and taking advantage of new nodes without manual intervention.

This winter, four packet satellites (designed and built by hams and sent into orbit on the French Ariane 4 rocket) will go into service, further shortening the effective mail path to any point in the world. And recently, a few gateways have emerged to semi-automate the link between wireless packet radio and the earthbound networks. (I say “semi” because regulations forbid business traffic or obscenity on ham radio channels, which requires human monitoring of any potentially abusable gateway.)

The implications of all this are profound. First, it is worth noting that the network is owned entirely by its users: There is no corporate substrate subject to regulatory disruption or single-point technical failure. The cost of admission is a ham license, a $250 radio, a $200 TNC, and a minimal personal computer.

Second, the communication medium is radio waves. This medium has notoriously little respect for such arbitrary barriers as national borders, making packet a powerful democratic tool. A network can be deployed from a few attaché cases, solar-powered digipeaters can be dropped from airplanes, and databases and knowledgebases can be shared within minutes of power-up.

But there is still the problem of ham radio channels and business. This is as it should be — innovation and knowledge arc freely shared in the name of the hobby, and the flood of business traffic would quickly destroy all motivation to explore. But like many other ham- developed technologies, commercial spin-offs are inevitable.

LAPTOPS OF THE FUTURE

When you consider that all it takes to build a capable 1,200-bps packet radio station is a 2-by-4-inch transceiver board, a 2-by-3-inch surface-mount TNC, and a 3-by-6-inch rubber-duckic antenna, it is tempting to incorporate one into a laptop. What would happen if you released a flood of these laptops upon the market?

Assuming the FCC approved a slice of spectrum to make all this legal, the result would be the formation of a hamlike packet network. In its most elemental form, this would allow easy (and free) electronic mail within any local area that contains enough units to form a critical mass — with intervening nodes automatically forwarding mail between those units too distant to hear each other.

At some point, someone will figure out that there is money to be made in providing long-haul links among cities, both in the form of contributions from existing users and a possible message-forwarding charge that could be levied automatically by any satellite or back bone and billed through a service bureau. (I’d prefer to see totally free facilities develop, which will probably happen over time as the participants see enough value to fund their own links or take up a collection.) Even the satellites are surprisingly affordable — roughly $40,000 for an orbiting BBS plus another $40,000 to hitchhike aboard the launch vehicle.

Such a public digital network is unlikely to replace the major mail services that form the backbone of business E-Mail. (I’d rather send a manuscript to a publisher instantly via GEnie than through a long succession of living-room-based nodes scattered across the country.) But the point is that the public network is owned by the people and is virtually unstoppable. It’s free, or nearly so, and it can spread worldwide with a little help from one or two nonprofit foundations. And once the mesh of links is tight enough to close the gaps among local area networks, the system could become a permanent web of data communication accessible to anyone. With file-transfer gateways to the more robust mainframe-based hosts, we will have brought the information age to the people.

Visions of on line Utopia aside, what good is packet technology today? To answer the question, simply think of every situation in which you have ever wanted to transport data without wires.

Let’s look again at the Winnebiko — the computerized bicycle that was introduced here in the May 8 issue. (See “On the Road with Laptops and Cellulars.”) At that time, we discussed the packet link between my backpack laptop and the bike’s file server — allowing me to “sign on” from a mile or more away and access any of the on-board systems or connect to an on-line service via cellular phone.

But there’s more packet radio on board than that. I have a node in the ham network, of course, and frequently wake up in the morning to find a message on the screen that says, “You have mail waiting.” To provide access to the big networks via radio, I have worked with an associate in Richmond, Virginia, to build a gateway between packet and GEnie — and the in-house CC:MAIL system of his company. His C program parses all incoming packet mail and redirects any for me to my log-in — “Wordy” — on my home network, solving the problem of mail chasing me around the country as I travel. (More technical details about the bike’s packet system are in my article: “Bicycle Mobile Packeteering”)

In addition to mail-oriented packet facilities, we also use the technology to network the bikes in our troupe together. This comes in handy for sharing data related to calculations regarding speed-distance-gearing status, solar/battery management, security, and so on. In essence, my bicycle is the hub of a complex mobile computing environment, and all communication is handled by RF data links. Some people take advantage of the Paccomm micro-TNCs; others use the new spread-spectrum “Spredex” technology from Hillier Technologies for 58-kbps resource sharing — such as allowing a lightweight system on one bike to access a hard disk-based database on mine. It’s even beginning to look as if high-speed RF datacomm is the best way to link the bike’s helmet-mounted display to the computers themselves.

Of course, a computerized bicycle is but a caricature of the industry — an extreme and slightly loony application environment for some very alluring technology. The identical techniques can network processors in buildings on opposite sides of a street (which would probably cost less than renting a data line from the local phone company), or link terminals on forklift trucks to company computers.

Perhaps the ultimate expression of this technology is a series of devices now in beta testing by Agilis Corp. In August, the company plans to introduce a hand-held computer system with wireless Ethernet capability (based on Hillier Technologies’ spread-spectrum RF link). The system will be available in a variety of configurations — 8088 or 80386, touch screen- or keyboard-based, and EGA backlit or reflective screens. The company will also release a transceiver that connects to a normal 3+Share file server; with this device, Agilis hand-held users will be able to communicate with the 3Com server, and through it to desk-bound workers on the network.

The range of the system is said to be about I kilometer outdoors and 100 meters indoors (depending on building materials). The wireless Ethernet works at the same speed as Apple’s Localtalk — 230 kbps. An 8088 system with a touch screen display, four-hour battery, and RF Ethernet module will probably sell for $6,000 to $7,000.

Agilis expects police departments, aircraft mechanics, and federal agencies (such as the U.S. Forestry Service) to be interested in its machines, but this kind of liberating technology has applications far beyond these confines.

Steven Roberts, author of Computing Across America, has traveled across the United States on his “Winnebiko,” a 54-speed recumbent bicycle/technology showcase equipped with a cellular phone, a modem, a ham radio station, a satellite earth station, and a 286-based computer system. Here is a video of the bike from a presentation at Xerox PARC.

The third and final article in this series discusses satellite data communications, specifically the Microsats launched by ham radio operators.